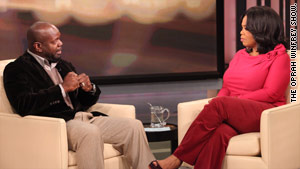 (OPRAH.com) -- Some know Emmitt Smith as the National Football League's all-time leading rusher. Others recognize him as a three-time Super Bowl champion or a Dancing with the Stars winner.

But do you really know who Emmitt is?

Until he traced his genealogy for the NBC reality series "Who Do You Think You Are?", Emmitt says he didn't even know the answer to that question.

To find out more about himself and the family members who paved the way for his success, this hall-of-fame inductee followed his roots to Burnt Corn, Alabama, the town where his great-grandmother was born. "I feel like a detective on a hunt trying to find clues," he says.

In Burnt Corn, Emmitt wandered into a convenience store and asked a clerk if he knew two of his relatives, Bill and Victoria Watson. Coincidentally, Joe, the clerk, turned out to be Emmitt's second cousin.

Oprah.com: How to dig up your own family history

Emmitt soon learned that his great-great-grandmother, Victoria, had an unusual maiden name -- Puryear.

Genealogist Marjorie Sholes told Emmitt that "Puryear" was probably the name of a slave owner. "African-Americans, at the end of the Civil War, sometimes picked the names of their last slave owner," she says.

The next step? Emmitt went in search of Victoria's parents' names. In an old ledger, Marjorie found a man named Prince Puryear who was described with the letter "m," which meant mulatto. "Specifically, black/white race," she says.

They also discovered that Prince's mom was a woman named Mariah. "Now, I know that Prince was mixed race and born into slavery," Emmitt says. "If Mariah was his mother, could she be the link between the black and the white side of my family?"

To explore this theory, Emmitt traveled to Mecklenburg, Virginia, to learn more about a notorious slave trader who owned Mariah at some point in history. The man's name was Alexander Puryear.

Virginia historian John Caknipe said Samuel Puryear, Alexander's father, might be the link to Mariah. To find out for sure, John selected a book of old deeds from a shelf. The number on the book was 22 -- the same number Emmitt wore on the football field for 15 years.

"I've been wearing jersey number 22 since college," he says. "Maybe it is my destiny, and I've always believed I was a child of destiny, but, whew, this is ... it's making me a little bit nervous."

Emmitt says the family history he unearthed in book 22 shook him to the core. John helped him find a property deed stating that Mariah was transferred from Samuel to his son, Alexander.

"In other words, the horses were more important than any slaves that they ever had," Emmitt says. "They treated my people like animals...but worse than animals."

Professor Steven Deyle, a domestic slave trade historian, says it's safe to assume that Samuel was, in fact, Mariah's father. "Alexander was engaged in this horrible, horrible traffic and why he didn't sell Mariah is because he recognized Mariah as his sister," Steven says.

After discovering the horrors his family endured, Emmitt says he's even more thankful for the power of progress. "I thank God for people who stood up for equality for all of us," he says.

Emmitt says he felt the true power of his newfound knowledge while sitting on the porch of an old slave quarters in Clayborn, Alabama.

"That house down in Clayborn is where I started to put things together," he says. "And right then and there, I sensed that my ancestors were crying out to me because they were lost for so many years, and here, their great-great-grandson is going on the journey to find who they were."

While Emmitt sat on the porch, it started to rain. "It was coming to me all at one time, and it was incredible," he says. "Oftentimes, people want closure, and I felt like my folks did not have closure. At that time, when I found that information, I felt like they were crying out, 'We got closure now.'"

After learning what he could from dusty record books, Emmitt took the next step in his genealogical journey and had a DNA test.

The results showed him that he's 81 percent African, 12 percent European and 7 percent Asian, which is most likely Native American ancestry.

Emmitt's journey has come to an end, but he encourages anyone who's curious about their roots to follow in his footsteps. "You must go do this yourself," he says. "It's extremely important. It's critical. It will help shape your vision in terms of how you go forward. It will also help you appreciate your past."