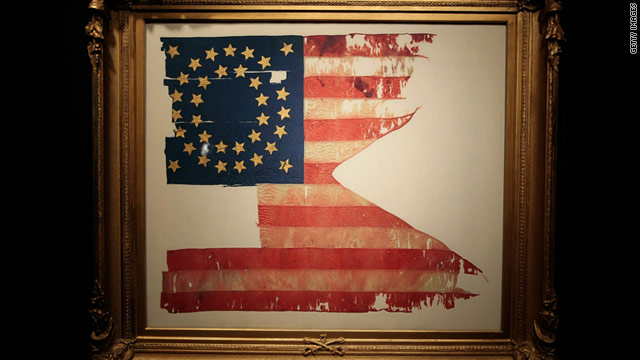 This flag was found beneath the body of a 7th Cavalry soldier killed in the 1876 Battle of Little Bighorn.
STORY HIGHLIGHTS
RELATED TOPICS

New York (CNN) -- A flag that accompanied Lt. Col. George Armstrong Custer and his 7th Cavalry into their final battle 134 years ago was sold by the auction house Sotheby's for $2.2 million on Friday.

The flag was sold to an unidentified American private collector, Sotheby's said. Two bidders vied for the banner.

The $2.2 million included commissions. Before the gavel went down, Sotheby's estimated the flag might go for between $2 million and $5 million.

Custer led more than 200 other other soldiers into battle against thousands of Lakota and Northern Cheyenne warriors on June 25, 1876, at the Little Bighorn River in what is now Montana. None of the U.S. soldiers survived the battle.

The flag is tattered and fragile, measures 27½ by 33 inches and may be stained with blood. It was found three days after the Battle of Little Bighorn -- or the Battle of Greasy Grass Creek, as the victors called it -- beneath the body of one of Custer's men killed in the battle.

Sgt. Ferdinand Culbertson, a member of the burial detail assigned to retrieve the remains of the 7th Cavalry, found the Cavalry guidon, or swallow-tail flag, that was used by cavalry companies. The design reduced wind drag as the soldiers advanced.

Custer's last battle was part of the United States government's 1876-77 campaign to retake the Black Hills region, ceded in perpetuity by an 1868 treaty to the Lakota. But when gold was discovered in the area, the army was sent to push the aboriginal Americans to a reservation set up for them.

The 7th Cavalry surprised the Lakota and Cheyenne, camped on the river banks, but Custer vastly underestimated their number and was crushed.

Sitting Bull and Crazy Horse were among the Lakota leaders who took part in the battle.

The Detroit Institute for the Arts acquired the flag in 1895 for $54 but decided to part with it and use the proceeds for future acquisitions of Native American art.