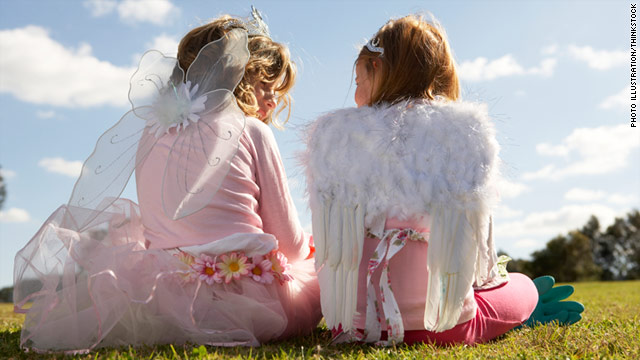 Create a gallery of miracles by focusing on a world filled with moments of grace and strange synchronicities.
STORY HIGHLIGHTS
RELATED TOPICS

(Oprah.com) -- "I was desperate," said Jean. "My husband had just left me, and I couldn't see any way to raise my kids or pay the bills. I'd collapsed in a suicidal heap, when I looked up and saw my bedroom full of angels. Guardian angels!" Jean toasted the memory with her teacup.

This conversation took place more than 20 years ago, when I was in graduate school in Cambridge, Massachusetts. I didn't know Jean that well, but she didn't seem like a wackadoo. I'd interviewed her for my Ph.D. dissertation on women and social change, and she had recounted how, after her divorce, she'd started a successful small business. All very rational.

It was after the interview, as I was stashing my notebook, that Jean leaned forward and said, "Actually...can I tell you what really happened?"

I tucked Jean's "guardian angel" story into my brain's Weird Anomaly file and forgot about it, until a few months later when I was categorizing my subjects. Looking at the "most satisfied" group, I was startled to realize that like Jean, almost all of these women reported experiencing something miraculous.

Oprah.com: 12 reasons even a skeptic can believe

Many of these were small blessings: helpers showing up at just the right moment, or "hearing" guidance from a quiet inner voice. Others were more dramatic. Two women believed they'd been spontaneously healed from serious illness, and several, like Jean, thought they'd experienced some sort of divine presence.

I was alarmed. How could I write about these women without either belittling their private experiences or being forcibly ejected from graduate school? I scurried to the library, seeking methods for studying wacky beliefs. I wasn't disappointed.

That day I learned about "bracketing," a handy little tool that allows anthropologists to contemplate another culture's stories without accepting them naively (thus becoming vulnerable to any guru who tells them to put cabbage in their underwear and bathe with plugged-in toasters) or utterly discounting them (thus embracing the arrogant assumption that we currently understand everything in the universe).

How "seeing" is believing

The movie "Avatar" is based on a reasonable facsimile of anthropological bracketing. In the film, a faraway planet populated by large blue people is invaded by materialistic humans who don't share one iota of the blue folks' tree-worshipping, kumbaya-singing worldview.

But one small group of social scientists puts aside earthly customs, learns the locals' language, and participates in their culture. The researchers maintain the nonjudgmental stance that any belief system, including the Big Blues', might (who knows?) be as valid as any other. That's bracketing.

This practice -- stepping outside your belief system into what Buddhists call "don't know mind" -- feels frighteningly uncertain. Most people prefer clinging like Velcro to their established version of reality.

Oprah.com: Open yourself up to wonder

Consider the physician who, in early 2010, pronounced Kate and David Ogg's newborn son Jamie dead at birth. Kate held Jamie's little body for two hours, at which point he started breathing, eating, and grabbing people's fingers. The doctor refused to come see, repeatedly sending word that Jamie's movements were "just reflexes." Today Jamie Ogg is an active 9-month-old. If this goes on, his doctor may eventually confirm that he's alive.

My point is that perceptual bias can affect nut jobs and scientists alike. If we hold too rigidly to what we think we know, we ignore or avoid evidence of anything that might change our mind. And by "our mind," I mean my own mind. Although I intended to "bracket" the miracle stories I heard during my dissertation research, a big part of me actually assumed they were false. I understood how the world worked -- after all, I'd lived in it a whopping 24 years.

And then, as I hit the quarter-century mark, I began experiencing things that pushed me to rethink the way I looked at the world. The first involved being trapped in a burning building: I was dragged half-conscious out of a smoke-filled stairwell by someone who left before I could catch my breath and thank him, or even see him. Television news videos of the fire showed me emerging from the building -- but my rescuer didn't appear on film.

At the time I was expecting a baby, and the pregnancy seemed to lend me strange abilities. I could see, vividly, things that were happening to friends and family far away. I had visions of my future that later proved accurate.

Oprah.com: 5 ways to increase the wonder in your life

Once, when I was sick and alone, I felt unseen hands comforting me physically. I confided what was happening to me to my friends, and most were kind but embarrassed, just as I'd been when Jean told me about her guardian angels. I could understand that -- I was terrified myself.

Mentally, I felt like a violently shaken snow globe, my beliefs drifting around loose, flaky, and upside down. I worried that if I truly suspended my disbelief in miracles, even momentarily, even under the principles of bracketing, that I'd never get it back.

Which, I admit, is kind of what happened.

When only the irrational seems rational

Unbeknownst to me, wandering around my neighborhood at that very time was author Mary Karr. In her memoir, "Lit," Karr describes recovering from alcoholism not far from where I was having my existential crisis. Karr, it turns out, was having her own uncommon experience, and it had to do with two specific scriptural passages a friend insisted she read. Karr found those passages -- and only those -- marked with blue chalk in her mother's childhood Bible.

"As miracles go," Karr writes, "it may not even seem like one. But it feels as if God once guided my mother's small hand ... to make two notes I'd very much need to find 70 years later." Karr asks her mathematically gifted sister, "What are the odds -- in terms of probability -- that those two passages would've been marked of all the verses possible. And she says, Very slender."

I have to say, I quietly thrill to this logic, the logic of probability. In the "hard sciences," like physics, identical conditions lead to identical results: Drop a rock and it falls, always. But people are less predictable than rocks. Not everyone follows trends; not everyone benefits from therapy; not everyone liked "Avatar." So social scientists use statistics to decide whether an event is random chance -- or the effect of a specific cause. They think in probabilities, not absolutes.

When I learned about probability theory back in the 1980s, bizarrely improbable things were happening to me. But weirder still, putting aside my "I believe in miracles" brackets and looking at my life from the perspective of a sociology student didn't make my woo-woo experiences seem less miraculous but more so. Thanks to my training in statistics, I realized that the odds of these things happening by chance were enormously improbable. Every worldview I chose, it seemed, edged me toward belief.

Whether you've seen angels floating around your bedroom or just found a ray of hope at a lonely moment, choosing to believe that something unseen is caring for you can be a life-shifting exercise. Even if you're the kind of person who makes Doubting Thomas look like a lightweight, decide, just until you finish this magazine, to set aside your disbelief.

To begin the bracketing process, start with these instructions:

1. List five important people in your life, not including members of your family of origin. Did anything improbable happen to bring you together with these people? Write down any coincidences or synchronicities you can remember.

2. Recall five experiences that dramatically changed your life: a chance meeting, accident, adventure, medical crisis. Did any unusual events enable you to have -- and survive -- these experiences?

3. Think of five important events in your career and/or your role as a parent. Looking back, did help ever arrive improbably just when you needed it?

4. Remember any weird-but-true experience in your life. Did you have a dream one night that later came true? Did a stranger, song, or book ever get your attention and answer an important question? Did you once use new computer software without making 500 calls to tech support? Make a list.

Okay, you've bracketed everything you've written down, choosing to believe that there might be something beyond mere coincidence. But the emphasis is on the word might. Now, stepping into your social scientist mode, review the lists, asking yourself, "What are the odds that this improbable event or that particular meeting is the result of something bigger than me?"

If you need help taming your inner skeptic, think of psychologist Abraham Maslow: He warned against coming under the sway of "the antirational, the antiempirical, the antiscientific," but he also wrote, "To be looking elsewhere for miracles is to me a sure sign of ignorance that everything is miraculous."

A rigorously trained social scientist, he found that seeing everything as miraculous was only logical.

When I consider all the strange occurrences framed by the brackets in my mind, I have to agree. Bracketing has turned all my experiences, remembered and present, into a gallery of miracles where I wander around dazzled by the beauty of events I cannot explain.

You might want to create such a gallery yourself. You need only your bracketing mind, your sense of what's probable -- and a world filled with moments of grace, strange synchronicities, and perhaps (who knows?) the occasional bedroom full of guardian angels.

Oprah.com: The healer who may have cured millions