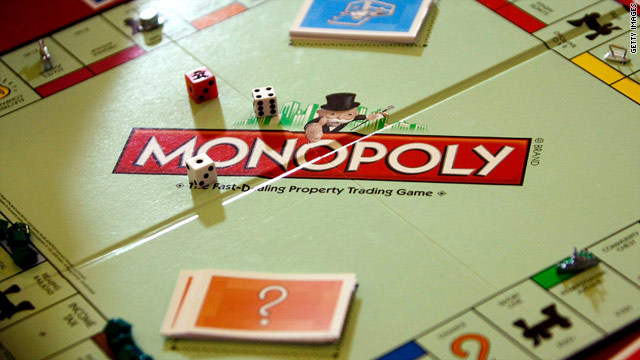 More than 275 million Monopoly games have been sold worldwide, according to Hasbro.
STORY HIGHLIGHTS

East Longmeadow, Massachusetts (CNN) -- Even as remnants of a recession leave the nation's real-estate market in a lurch, machines crank out millions of tiny hotels and houses at a factory in western Massachusetts.

This is where Monopoly is made. The popular board game, which began during the Great Depression, turns 75 this year.

Alma Ocampo has helped make the game for 25 of those years at the Hasbro games factory in East Longmeadow, Massachusetts.

"I work on the Monopoly line...It's being part of history," she says, as she flips through a pack of the game's famous fake money.

Show us your Mr. Moneybags costumes

More than 6 billion game pieces in the shape of green houses and 2.25 billion red hotels have been made since 1935, Hasbro says. Saturday marks 75 years since the patent was acquired for the board game.

And as people passed go, collected $200 and got out of jail for free for three quarters of a century, more than 275 million games were sold worldwide, according to the company.

"Life is just too hectic now. It moves at a pace that we're not used to," says Gary Brennan, Hasbro's vice president of manufacturing. "This slows it down a little bit, the perfect family game."

We've been passing Go for 75 years

But even Monopoly has changed with the times. The original tokens of a lantern, purse and rocking horse were removed from the game in the early 1950s and replaced by the dog, horse and rider and wheelbarrow.

In the 1970s, a Braille edition of the game was created for the visually impaired. And in 1978, the Neiman Marcus Christmas catalog offered a chocolate version of the game for $600.

In the 1980s, before the world Monopoly tournament in London, England, artist and jeweler Sidney Mobell decided to make a new version of the game -- using solid gold, diamonds, emeralds, rubies and sapphires.

"It took a lot of work. It took me a year from start to finish to go ahead and do this set," said Mobell, 84, who was 9 years old when he played the game for the first time.

Show us your Monopoly games

"I played with family. I played with my mother, my father, my sister, my brother, my cousins. We all played Monopoly, and everyone was trying to win.... the most important thing, let's face it, in our lives, was to win Monopoly."

Now his version of the game, valued at $2 million, is on display at the Museum of American Finance in New York.

Twenty-first century players may be pinching their pennies, but they're finding new ways to hone their Monopoly skills.

A partnership between Hasbro and Google for an online version of the game last year had 1.4 million registered players, and the company released an Apple iPhone application in February.