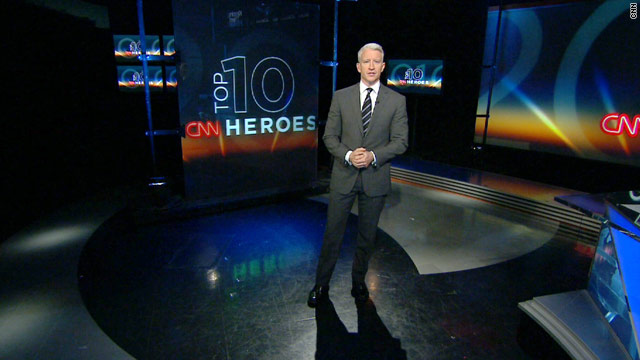 The top 10 -- remarkable individuals nominated by viewers for their sacrifices and accomplishments -- have been revealed by CNN's Anderson Cooper.

This year marks CNN's fourth annual global search for everyday individuals changing the world. Since January, the network has aired weekly profiles of CNN Heroes, chosen from more than 10,000 nominations submitted by viewers in 100 countries.

A panel comprised of luminaries recognized for their own dedication to public service selected this year's top 10 CNN Heroes. The blue ribbon panel includes humanitarians, activists and philanthropists such as Muhammad Ali, Sir Richard Branson and Yo-Yo Ma.

The global broadcast, hosted by Cooper at the Shrine Auditorium in Los Angeles, California, will culminate with the announcement of the CNN Hero of the Year, selected by the public in an eight-week online poll.

Vote for your favorite CNN Hero

The individual receiving the most votes will receive an additional $100,000.

Evans Wadongo, 23, invented a way for rural families in Kenya to replace smoky kerosene and firelight with solar power. Through his Use Solar, Save Lives program, he's distributed an estimated 10,000 solar lanterns for free. Learn more about Evans