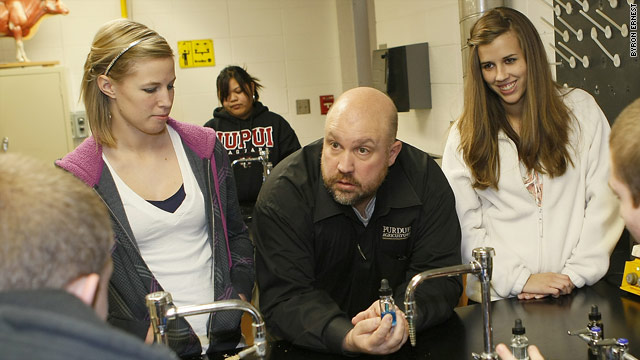 (CNN) -- What if students attended school all year? One Wisconsin teacher thinks that could be a way to improve student grades and fix the nation's public school system.

Almost every teacher has thoughts on how to improve schools. So this month, as students began to trickle into classrooms, CNN listened to the ideas of award-winning teachers at public schools across the country.

From encouraging more investment in quality teachers to improving student access to technology, these passionate teachers had plenty to say, despite the difficulties of budget reductions and teacher cuts.

Almost all the teachers warned that there is no quick fix. But for now, here are some of their top suggestions:

Quality teachers in the classroom 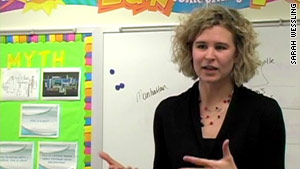 English teacher Sarah Wessling wants schools to have more teachers who can make a difference in students' lives.

There should be more investment in good teachers, says Sarah Wessling, who received the National Teacher of the Year award from President Obama in April.

Wessling, who teaches high school English in Iowa, is known for keeping her classroom exciting. Instead of having her students write traditional papers for homework, their assignments include writing songs, public service announcements and grant proposals.

"I remember the teacher who made a difference to me," Wessling said. "And it reminds me how important it is to have that person in the classroom."

Tests are a routine method of assessing school performance, but Gloria Allen, an elementary school science teacher in Washington, D.C., said some educators and parents put too much weight on a child's test scores.

Instead of focusing solely on test performance, which may represent only one day of a student's achievements, more attention should be placed on how a student performs the entire year, said Allen, who received a science teaching award this summer.

"There needs to be a better way of quantifying what we are doing," she said.

We may be in the internet age, but many school districts across the country still have inadequate access to computers, said Bruce Penniman, a former high school English teacher in Massachusetts who won several teaching awards in his 30-plus-year career.

Access to technology may be especially limited in a bad economy, but many teachers agree that computers in the classroom can be a vital learning tool.

"The whole question of resources is always a big one," said Penniman, who now works as a writing consultant. "We are still in an educational system where the kind of resources available depends on the ZIP code, and that's really a tragedy."

Two minds together can be more successful than one, says Zanetta Robinson, a Florida middle school English teacher. Workshops and online training programs that allow teachers to collaborate can be useful for sharing effective teaching methods and not-so-successful classroom experiences.

"Unfortunately, you get a great foundation in school," said Robinson, who won an early career teaching award. "But I think everyone understands theory and practice can be two different things."

The economic crisis is bad news for public schools. Even though schools across the country are tightening their budgets, schools should develop other ways to get money, said Bonnie Embry, who has garnered multiple awards for teaching elementary school science in Kentucky.

"While funding is vital to existing and expanding programs, schools need more initiatives that capitalize on the time, resources and knowledge of members of the community," she said.

Schools should take the time to develop relationships with parents, said Sally Hunter, a fourth-grade teacher at an elementary school in Texas. Parents are essential to a child's success at school. Moms and dads should get involved inside and outside the classroom, she said.

"Schools should be a partner, not the sole proprietor of education," said Hunter, who was honored with a social studies teaching award this year.

This proposal might make some students gripe, but year-round schooling could help them succeed academically, suggests Michael Koren, a Wisconsin instructor who has earned accolades for teaching middle school social studies. Koren says that over the three-month summer break, students lose a lot of information they learned during the school year.

Another of Koren's ideas: shifting school hours to accommodate parents' work schedules so they can spend more time with their children.

"We need to change those paradigms," he said.

"Risk-taking must be commonplace and encouraged if this reform is to be successful," he said.

Many families have been affected by the economic downturn, and schools should try to help families in need, says Debra Calvino, a math teacher who won the 2010 New York State Teacher of the Year award. She has noticed more homeless children entering the classroom.

Do you have an idea on how to fix our schools? Share with us in the soundoff section.