To paddle or not to paddle students 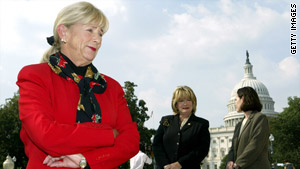 Rep. Carolyn McCarthy says the emotional scars from getting paddled in school can last a long time.
STORY HIGHLIGHTS

(CNN) -- A congresswoman who is fighting to improve public education says that paddling in schools has got to stop.

"The bottom line is that if we don't allow beatings in prisons or in mental institutions, then it's time we stop allowing it in our schools," said Rep. Carolyn McCarthy, D-New York.

McCarthy recently introduced legislation into Congress that calls for a national end to paddling, a form of corporal punishment, in all schools in the United States. She calls corporal punishment a safety issue in schools, saying it can aggravate students and make them violent.

The "Ending Corporal Punishment in Schools Act" would ban any form of physical discipline on students in public and private schools that receive federal funding. The bill would also provide federal grants to schools dealing with disciplinarily issues to promote nonphysical ways to change student behavior.

But other education officials believe that schools need corporal punishment to keep students in line.

"Our public education is in a state of crisis because the current discipline system in this nation is being ineffectively implemented," said Kenneth Whalum Jr., a board commissioner for Memphis City Schools in Tennessee. "Corporal punishment would be an arrow in the quiver for teachers to use at their disposal. It's the best way to get the system right."

Corporal punishment in the U.S.

It is legal in 20 states to use paddling, a form of corporal punishment that allows teachers and administrators to hit students on the buttocks with a flat wooden board, according to a recent report released by the American Civil Liberties Union and Human Rights Watch.

It is a form of discipline that "causes immediate pain, and in some cases, lasting injury and mental trauma," the report stated. Texas, Mississippi, Alabama, Arkansas, Georgia and Tennessee are the six states with the most cases of corporal punishment.

In 1977, the Supreme Court ruled in the Ingraham v. Wright case that corporal punishment in schools is not cruel or unusual.

But Jordan Riak, executive director of Parents and Teachers Against Violence in Education, says that all violence is wrong.

"Hitting a student in the classroom does what wife beating does to a marriage. Assaulting and battering someone does not achieve anything positive because it just simply relieves the frustration of the hitter," he said.

The most recent data available from the U.S. Department of Education, Office for Civil Rights, states that 223,190 students nationwide were paddled at least once in the 2006-07 school year, including at least 41,972 students with disabilities.

Minority students are among those most likely to be paddled, which raises questions about the fairness of using corporal punishment.

The Temple Independent School District in Texas reinstated corporal punishment in 2009 after a push from parents who wanted consistency in discipline.

"Parents that supported corporal punishment wanted a seamless discipline plan between the home and school. This stems from parents saying there was a disconnect with a child at home and in school and they wanted to improve student behavior," said Dr. John Hancock, assistant superintendent of Temple schools.

Corporal punishment would be an arrow in the quiver for teachers to use at their disposal. It's the best way to get the system right.
--Kenneth Whalum Jr., board commissioner for Memphis City Schools in Tennessee

But Mississippi PTA President Deloris Irving says her state organization follows the position of the national PTA, which favors the abolishment of corporal punishment in all schools.

Irving acknowledged that discipline can provide for a better learning environment. But she also said parental concerns about corporal punishment center on whether it would be administered properly, at the right time and without abuse.

The fear that disproportionate paddling will increase violence by students is what most concerns McCarthy, who attended Catholic school as a child and was rapped on the knuckles with a ruler for misbehavior.

"Some people believe children are too young to understand, that corporal punishment is a quick fix to deal with behavioral issues," she said. "But emotional scars [from paddling] are very deep. I have met young people who were paddled, and they say it has affected them in so many ways."

Paddling and other forms of corporal punishment create "a violent, degrading school environment in which all students -- and particularly students with disabilities -- may struggle to succeed," the ACLU reports.

Without paddling, students would be less likely to become antisocial or aggressively violent, McCarthy said, and this is especially important for minorities and students with disabilities who may have a harder time fitting into certain social situations.

Marjorie Gunnoe, a psychology professor at Calvin College in Grand Rapids, Michigan, agrees that physical acts have an effect on children's development. "A child's behavior plays a key role to how they will function in other aspects of their life, including education," she said.

However, before making national decisions on whether or not corporal punishment should be eliminated, Gunnoe said that legislators will need more proof that children who aren't spanked or paddled are actually better off.

Gunnoe recently conducted a study with 180 teenage children on spanking and its risk factors in childhood. She found that children who remembered being spanked on their bottom with an open hand performed better in school academically, did more volunteer work and were more optimistic in terms of their future, compared with children who had never been spanked.

If we are going to outlaw it, we need some evidence that kids that have never been spanked actually perform better, and we really don't have that yet.
--Marjorie Gunnoe, psychology professor

"I'm not advocating or promoting spanking," Gunnoe said. "If we are going to outlaw it, we need some evidence that kids that have never been spanked actually perform better, and we really don't have that yet."

The belief that physical discipline promotes good behavior, which is necessary for academic progress, is what keeps Whalum pushing for corporal punishment to remain in schools.

Whalum was elected to the Memphis City School Board by running on a pro-corporal punishment platform in 2004. This past June, he attempted to push through a resolution to bring corporal punishment back to Memphis City Schools, after it was abolished in a 5-to-4 vote in 2004, but his proposition failed to receive enough support from other board members.

"The problem in Memphis, like many other large, poor and urban school districts, is that poverty creates an insurmountable boundary against a child receiving a well-rounded education," he said. "When you remove the ability for the school to discipline students, as they did in the old days, you are creating a system that serves to undermine students' progress in school."

Whalum supports corporal punishment not as a lone resource but as part of a larger disciplinary plan that works toward decreasing classroom interruptions that take away from instruction time.

Julian Mansfield, a 19-year-old student who lived in Memphis and attended public schools there, agrees with Whalum's support for corporal punishment. He says the potential shame caused by corporal punishment is more a deterrent than the threat of pain.

"It's the fact that you're going to get embarrassed in front of all your peers that keeps you from wanting to act up," he said. "I think people need to understand there is a psychological effect in corporal punishment, more than the physical, that really helps to curb bad behavior in schools."

But this style of ridicule, McCarthy said, does not set a good example for students.

"Paddling does not send children the right message," the congresswoman said. "It reinforces the idea that being violent is the only way to handle a conflict. Corporal punishment goes against what we have been teaching students for years."

It reinforces the idea that being violent is the only way to handle a conflict. Corporal punishment goes against what we have been teaching students for years.
--U.S. Rep. Carolyn McCarthy, D-New York
RELATED TOPICS

The idea of a positive behavior system, like McCarthy's plan, does not work in urban areas like Memphis, Whalum said.

"The problem now with a behavior-reward system is that there is nothing being done to discourage misbehavior," Whalum said. "You have to show students that there are consequences, or they won't learn to behave."

Outrage over the increase of misbehavior by urban students in Memphis is pushing teachers and administrators toward a revolution in public education, Whalum said. He said that of the nearly 700 teachers and parents that he polled, 75 percent supported the reinstitution of paddling in schools.

Stories of violent behavior are not uncommon in areas like Memphis. Teachers tell of being attacked by defiant 12-year-olds and of amassing medical bills for injuries caused by students. Whalum said that the most disturbing issue is that schools are suspending and expelling kindergartners and elementary school students for aggressive behavior, actions that can result in the criminalization, rather than education, of students.

Gunnoe is wary of giving schools the power to discipline someone else's child. "It's really the parent's business to discipline the children, not the school," she said. "It becomes a very risky situation when schools become responsible for children long term, and moreover if hitting or any form of physical punishment is involved."

But parents don't always step up to the task, says Riak, and that can also harm the child.

"In the inner city, children grow up in families where they are neglected, and that's just as bad as hitting because they don't have the right guidance and support. On the other hand, you can't let students run around and do what they want to do. Permissiveness is not an alternative to spanking either."