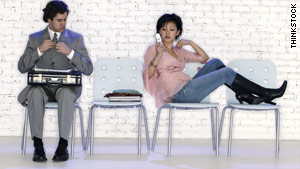 A lack of professionalism can sink your job opportunity.
STORY HIGHLIGHTS

(CareerBuilder.com) -- Everyone has encountered a deal breaker. That one unappealing characteristic -- no matter how attractive something initially seems -- that completely overrides any positive aspects.

For example, you found a great apartment but it's a mile from the subway or your hot blind date acts like a cast member from "The Jersey Shore".

Like anyone else, hiring managers have deal breakers too -- things that a job candidate does or says that immediately gets their application sent to the "no" pile.

Here are some automatic applicant disqualifiers, straight from the recruiter's mouths:

"I provide personal PR consulting as part of my practice and job interviews have come up recently. In talking with other managers the worst interview blunder that I keep hearing about is young grads using social media speak during conversations, as if LOL is a real word.

Most hiring managers are social media savvy, but they want to know that their future employee can carry on professional conversations with all levels of the organizations -- using real words."
-- Jules Zunich, owner, Z Group PR

"The first thing that comes to mind when I think about deal breakers is the candidate's online personal brand. I Google candidates and if I find online content that is concerning, it's an immediate deal breaker.

Examples of this include: pictures of the candidate drunk or acting in a promiscuous way or albums of pictures that represent a 'party animal' image; blogs or videos that are not in good taste; blogs, articles or any written content with below par writing and grammar skills; lack of professionalism or good conduct in group discussions (i.e. LinkedIn groups); complaints about prior companies and managers; and just a general usage of improper language on any social media venue."
-- Jessica Simko, human resource manager and owner, WorkandLifeSolutions.com

1. Bringing up salary in the initial interview (for an otherwise great interview, I'll excuse this if it happens during the Q&A at the end).

2. Speaking about scheduling limitations or prospective reasons to leave the position right off the bat.

3. Acting impolitely or speaking down to any person in our office (receptionists or secretaries included).

4. Telling me that dealing with people is your biggest challenge/weakness or least favorite thing. Very few jobs let you work without other people.

5. Consistently answering questions other than those I asked.

In general, it's often the little things that distinguish a good candidate from a bad candidate, so keeping all of those little things in mind is very important!"
-- Josh, commenter on TheHiringSite.com

"Deal breakers I have seen include: Having a really immature [cell phone] ringback (I called one girl for an interview and her ringback was some hip hop song).

Also, once a candidate didn't know what company they were applying for. Although the job posting didn't note the company name, the root domain of my e-mail should give away our web address, and we were looking for someone that was tech savvy for the job.

Another time I told a candidate to dress fashionably for the interview because we were a fashion company, but she was a total mess when she came into the interview with loose clothing and really messy hair."
-- Danny Wong, hiring manager, Blank Label Clothing

When I asked for an explanation she told me that she could not remember the dates of employment at her previous job and that she had removed her previous job from the new résumé because she wanted everything to fit on two pages. When I told her that I could not proceed with her candidacy because of the inaccuracies, she actually got angry at me.

The second was a lawyer who, on a new résumé, changed the dates of his previous employments and removed one job completely. The funny thing was that he knew I had the previous résumé. The rule is simple: liars need not apply!"
-- Bruce Hurwitz, president and CEO, Hurwitz Strategic Staffing

"Arrogance. When a candidate is overly confident, I find them to have a sense of entitlement, which is the last thing any employer wants to deal with. Remember to be gracious to anyone you meet during the job search process. Being humble will get you farther than being conceited."
-- Elliott Martimbeau, Recruiting Manager at Sapphire Technologies

"One candidate I met recently came into my client's office and complained about the sign on the building. She said that it was too high up and was blocked by the trees surrounding it so she was unable to find the company. If you are this negative going into an interview when you're supposed to be at your best, think about how negative you'll be when you face challenges as an employee.

Another candidate interviewing for a coordinator role asked for directions when I scheduled the interview. These days with Google Maps being so prevalent, candidates should be able to find their own directions, even if they don't have a GPS. Worse yet, she got lost on the way to the interview, and rather than asking someone in the neighborhood to help her, she called me. It took me five minutes to explain where the building was. Clearly this was not a person who was able to think on her own -- a deal breaker for a coordinator role."
-- Abby Kohut, former hiring manager and author of "101 Job Search Secrets"

"Internally here when interviewing, we try and be somewhat forgiving as we understand everyone is only human, however when the competition is high, there are things that can immediately remove people from consideration -- particularly if it's something that reflects on skills or attributes relevant to the job.

One of the big ones for us is spelling on a résumé, simply because it speaks to a person's attention to detail. If they can't check their own résumé over to ensure there are no mistakes, how could we expect them to do it once they get hired by one of our clients? So unless someone is a true superstar or has skills and experience that are in high demand, spelling mistakes are a deal breaker for us. The lesson here then is to make sure you triple check your résumé before applying.

In addition, we've heard from a number of our clients about their personal deal breakers as well. While many are the same, we've definitely heard some unique ones. One hiring manager eliminated a short-listed candidate because her bra strap was showing. Another because a woman's skirt was too short. You never know the type of person you're going to be interviewing with and what type of quirky biases they may have. While some hiring managers' personal deal breakers might not exactly be fair to candidates, the bottom line is that they can and do eliminate candidates based on these personal judgments. Our best advice would be to err on the conservative or more professional side if you're ever in doubt."
-- Greg Masiewich, manager, IQ Partners Inc.

There you have it, hiring deal breakers straight from the source. It appears that all of the disqualifiers mentioned above were caused by one thing: lack of professionalism.

Remember, no detail is too small to be overlooked by a recruiter, so make sure you exude a professional demeanor during your job search -- whether it be in the way you dress, your manner of speaking, your online profile or even your cell-phone ringback -- recruiters take everything into account.