Japanese giant salamanders are in a fishbowl of sorts, for research 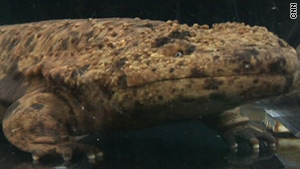 Japanese giant salamanders can stave off the ravages of a fungus that are lethal to other types of salamanders.
STORY HIGHLIGHTS
RELATED TOPICS

Washington (CNN) -- The Japanese giant salamander may hold the key to solving an extinction threat in the amphibian community, and researchers at the National Zoo in Washington are hoping a gift of five of the creatures from Japan will help them find out for certain.

Scientists estimate that about one-third of the more than 6,000 amphibian species in the world are in danger of extinction with one of the primary causes being a fungus that causes a skin disease called chytridiomycosis or "chytrid" for short.

For some unknown reason, the fungus is not lethal to Japanese giant salamanders. So, if scientists can figure out why, they can possibly use the knowledge to help other salamanders and frogs.

With a gift of two males and three females, researchers are starting a breeding facility for the salamanders -- the first one outside Japan for over a hundred years. Researchers plan to send the offspring to other zoos and aquariums for further study and education.

On Thursday one Japanese giant salamander peered with beady little eyes at media and special zoo guests gathered at his 8-foot tank in the new breeding facility. It was a big day for the amphibian; he was being introduced to the American public for the first time.

The big-headed, brown spotted, two-foot-long salamanders twisted and turned in their 2,500-gallon tanks, performing for the audience. At full size, the animals can grow to 5 feet long and weigh up to 55 pounds.

"They're big. They're ugly to some, and they're beautiful to me," said Zoo Senior Curator Ed Bronikowski.

The five Japanese giant salamanders have actually been in the United States since December, but the zoo kept them in quarantine until now.

According to Bronikowski, in the past six months they have already shown growth and have also shown personalities. "But that's only detected by their keepers -- it's subtle," he said.

One of the salamanders is on display for the general public, while four of them will reside in the zoo's breeding center.