The secrets of a 72-year marriage from the 'Original Grandparents' 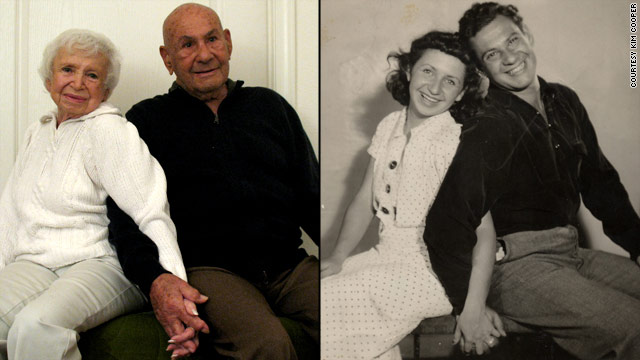 Harry and Barbara Cooper have been married for 72 years. Their blog, The OGs (short for Original Grandparents), chronicles their relationship and offers advice to viewers. The couple's blog has gained thousands of fans.
STORY HIGHLIGHTS
RELATED TOPICS

(CNN) -- Harry and Barbara Cooper are telling everyone how their marriage has lasted seven decades.

On the day of their 72nd wedding anniversary, they leaned toward each other, hands tenderly clasped, as they peered into the camera.

'It's a give-and-take situation," said Harry, as Barbara, giggled. "I give, and she takes."

This is an unconventional showcase for any elderly couple in their retirement home, but a typical day for two of the oldest bloggers in Los Angeles, California. Harry recently turned 98. Barbara is 93. The Coopers rely on their granddaughters to videotape their chat, which is later posted on their blog, "The OGs" (short for Original Grandparents).

Harry and Barbara have become an internet sensation, attracting thousands of fans since their blog debuted in late 2008. Their grandchildren helped them launch the OG blog as a way for them to share their wisdom, humor and relationship with the rest of the world.

When most people their age shy away from the mysteries of the Internet, the pair boasts 1,900 Facebook fans. Barbara, whose dark hair has turned to a wispy white, also tweets and posts restaurant reviews on Yelp.

But perhaps what's most fascinating for readers isn't the couple's ease with the Web, but it's the strength of their marriage. At a time when statistics show every other marriage ending in divorce in the U.S., Harry and Barbara have proved a relationship can last a very long time.

They have witnessed important moments in history together -- World War II, President Kennedy's assassination and the terror attack on New York's Twin Towers.

They've been inseparable since they first met on a tennis court in Los Angeles in 1937. Harry, then 24, was playing a game while Barbara, then 19, showed up with friends in her high heels. She caught his attention.

"Barbara was a pretty girl," he recalls. "She was very, very polite, and we got along pretty good."

On their first date, Harry took her for a drive in his car, and they did what most young love birds did back then: They munched on popcorn and listened to crooner Bing Crosby.

Harry proposed swiftly, about four months after their first date. He had asked Barbara's father for permission to pop the question. Harry sold himself as a hard-working man with $116 proudly saved in his bank account.

The couple were outside a jewelry shop in Pasadena, California, window-shopping when Harry turned to Barbara and said, "Someday, I'm going to buy you a ring like this."

He gave her gold wedding band with small diamonds. She kept the ring on her finger until her elbow surgery a few years ago.

Over the years, he proved himself to be a fine husband, Barbara said. In addition to serving in the Army, Harry was a delivery man and started a shoe business. At one point, he worked a dangerous position as a boilermaker's helper. Barbara spent most her time at home, raising their two children.

"It was happy," said Barbara about the early years of their marriage. "It was building one dollar on top of another."

By the 1960s, their children, who had been the center of their worlds, had grown into young adults ready to start families of their own. Their initial years as empty-nesters were challenging, but the couple found comfort in each other.

Barbara describes Harry as a sweet, content and happy man.

Harry and Barbara celebrated their 25th anniversary with a trip to Europe. Then the first grandchild came. Today, they have seven of them.

The couple can't remember what they did for their 50th anniversary, but for Harry's 80th birthday, they recalled, the family went on a three-day cruise to Mexico.

"We are just content individuals," Barbara said, adding, "We landed on our feet. We have a fine family."

But the couple experienced several emotional setbacks in 2007 when both their children, who were in their mid-60s, died. One died from a heart attack and one from cancer. The couple battled anguish and sadness after their children's deaths.

Granddaughters Kim Cooper, now 43, and Chinta Cooper, now 21, who live in the Los Angeles area, encouraged their grandparents to move to a nursing home nearby. There, the blog was born.

"They are so adorable together," Kim says. "Their incredible romance shines through in everything they do. They are funny, inventive, unusual characters."

Barbara was a pretty girl. She was very, very polite, and we got along pretty good.
--Harry Cooper, 98

In the video segments on the OGs, viewers can easily spot the enduring bond between Harry and Barbara. They lean in on each other and stare at each other when they talk. They laugh and smile together. They make being married, even at their old age, look effortless.

Barbara is better known as "Cutie" on their blog, where she wears several hats. As a food critic, she recently wrote a review of French pastries at a local restaurant. She danced in a video where she showcased her moves, waving her arms and sashaying her hips. In another post, she offered her opinion of Lady Gaga's music video "Alejandro."

"I think it's nothing new, it's nothing charming," Barbara wrote in the music-related post last month. "It's got no message. I'm sorry, I did not enjoy this."

Readers can also seek Barbara's advice on the "Ask Grandma" video series. Even with her meek voice, she delivers no-nonsense answers on friends, family and relationships.

Harry appears online as "PopPop," a nickname given to him by his granddaughter Kim when she was a child. He's the quieter sidekick in the duo, but he has his own section of the blog called "PopPop's Adventure Corner," where he tells jokes and sings songs he learned in the Army.

When Harry isn't blogging, he enjoys eating raw fish, spicy foods and Chinese dumplings. He broke his leg last year and now has titanium in his thigh. He uses a walker now, his family says, and requires more care than Barbara.

Barbara spends her days watching daytime judge shows and, of course, she visits Harry every morning. She suffered a heart attack a few years back but has been healthy since then.

So what's the secret to their marriage?

"We have a solid marriage," Barbara says. "It isn't Romeo and Juliet every day, but Harry thinks I'm OK, and I love him. We are accepting of each other."

And that's good enough for them.