In dating, men should make the plans 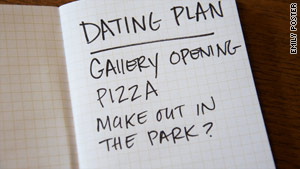 By making date plans, men can save some change in their pockets and prove themselves to a woman.
STORY HIGHLIGHTS

(The Frisky) -- When it comes to dating, men should make the plans. I think this would solve a lot of dating drama. Men have a natural knack for making plans, be them Death Star attack strategies, bank heists or prison breakouts.

But I'm not here to reinforce gender norms, much. I'm just making a decision that I think will benefit everyone. Men should make bold, creative, and romantic plans. In return, women should have fun. Because dating is fun. What did I write? Yes: dating is fun. It's giggles and burping butterflies, and like any adventure it sometimes ends with a daring escape from a troll. Fun!

It's a classic case of "win/win," if we can all agree that men should make the plans. Men get to save a buck, while women get proof that the man is capable of thinking about her when she's not around. During The Manic Recession, more men were laid off. Economic turmoil causes anxiety. Anxiety is caused by a loss of control. The Average Joe can't control the fluctuations of the global financial system.

But you know what a man can control? Making a plan. A little creativity can save a lot of scratch, especially when wooing a woman. Wooing women is, frankly, the whole point of life as far as I'm concerned. I'm pretty sure man was not put on this Earth to perfect the "pizza taco." Seriously. The first bridge was built by a man who had to cross a river to get to a prehistoric hottie. Men write cheesy love letters, heroically dispose of mouse traps, and make mighty buckets of pasta all to win the favor of bonny lasses. Making the date night plan is part of this noble tradition.

The Frisky: 9 ways to hit on a guy

And I'm stressing the money factor because if one guy who's a little insecure about his finances reads this, and decides to, say, scan the newspaper to look for a free gallery opening to take a date to, then I will swell with man pride. A single hot sauce tear will roll down my ruddy cheek. But seriously: free gallery openings are great. Chicks dig that noise. There's a museum here in New York City that's free on Friday nights. I mean, it's all modern art, so it's a bit of a walking nap. Nothing but canvases splattered with paint splattering, purple giraffes, and mannequins giving birth to toasters. But it's a freebie designed to help men on budgets kill a couple of hours before a tongue collision.

During the spring and summer, every city in the country has free concerts. Wine shops frequently offer fancy tastings. With a little research, it's not hard to find small, affordable restaurants. A good date plan is the same as, say, a good "MacGyver" plan.

First, there's the idea, then the research and, finally, the execution. Surprising her is the key. To do this, intel is necessary. Did she mention on the phone that she loves the water? Plan a picnic by a lake! Then research and execute. Men make plans: I have a fire escape plan, a zombie attack contingency plan, and a terrorist attack plan. My girlfriend doesn't know this. But in the eventuality of fire, undead hordes, or Al Qaeda, we're taken care of. Rope? Check. Homemade zombie weapon (a kitchen knife tied to a broom handle)? Check. Karate fury? Check.

The Frisky: 10 famous men who married (or stayed with) their mistress

I hear women complain that the men in their lives don't make plans. That these dudes are apathetic. Conversations go like this: "What do you want to do tomorrow night?" He shrugs and says, "I dunno." Women get frustrated by this, express said frustration, and are immediately dismissed as "nags." But I know better. Plans are proof that a man is capable of holding you in his head and heart when you're not there in the flesh. Out of sight, but still on the mind. It's nice to be thought about. We get that. This is settled then. Men make the plans. Women go out with those men. Everybody is happy. Dating is fun!

I love it when a plan comes together.

The Frisky: 5 types you shouldn't date