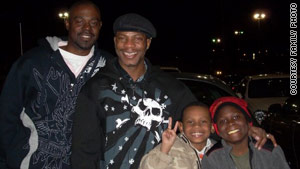 David Mayer, left, had four children and Keith Kennard had three when they met.

(CNN) -- David Mayer and Keith Kennard's family is a modern-day Brady Bunch, with a twist. David, 43, has three sons and a daughter. His partner, Keith, 47, has three boys of his own. Together they are two gay men raising seven children.

Their story reflects the changing face of the American family. The Williams Institute, an independent research group and UCLA think tank, estimates 20 percent (about 155,000) of same-sex couples in the U.S. are raising children younger than 18.

"It's a chaotic day keeping up with kids and doctors appointments and just their daily lives," says Keith, a nurse at an Atlanta hospital. "We don't get a lot of rest."

David, a manager for a security firm, and Keith say they've developed a regimented system for raising their children. Between getting everyone up and ready for school and shuffling around basketball practice and JROTC, their family's schedule is pretty full. By the end of the day, Keith says, "[We] get dinner on the table, homework checked and have them in bed by 10 o'clock, and the day starts all over again."

For this couple, the joys of family life outweigh the challenges. "We really couldn't ask for a better opportunity to really raise our kids together ... you don't really hear that in our gay community, especially with black men."

In the U.S., one in six gay men has fathered or adopted a child, according to the Williams Institute. David and Keith each had children before their relationship. Three of their sons and their daughter are David's biological children from a heterosexual relationship. Their other sons are children Keith adopted when he was single.

"I always knew that I wanted to be a dad ever since I was little," Keith remembers. "I really was very much interested in adoption."

Adopting when you're gay

For gays and lesbians, adopting children can be tricky because adoption laws vary by state. Keith started the adoption process in Georgia and says he was up-front about his sexual orientation.

"I brought it up because I wanted to make sure that there wasn't any problem," he says. "I had heard about the laws they had in Florida against [homosexual] individuals adopting children ... and I wasn't really sure what the laws were here in Georgia."

Florida is the only state that bans gays and lesbians from adopting. The law dates back to 1977 and was inspired by singer Anita Bryant's campaign against extending certain rights to gays and lesbians. The issue of gay adoption is before Florida's Third District Court of Appeals.

Earlier this year, Joe Follick, communications director of the Florida Department of Children and Families, stated, "Like every state agency, we are governed by the laws set by the legislature, approved by the governor, and if necessary, adjudicated by the courts ... Until there is a unified appellate court decision on this issue, we are bound by Florida statute to defend and adhere to the law."

Other states, such as Mississippi and Utah, allow gay and lesbian individuals to adopt, but not same-sex couples. California, Maryland, Massachusetts, Nevada, New Jersey, New York, Connecticut, Illinois, Indiana, Pennsylvania, Vermont and the District of Columbia all have policies that explicitly or implicitly state that sexual orientation may not be used to prevent gays and lesbians from adopting. Georgia, where David and Keith live, has no explicit laws prohibiting or allowing gays and lesbians to adopt children.

"The law could be changed. [Georgia] could come out and try to make a law specifically outlawing gay and lesbian adoption," according to Amber Burfeind of the Independent Adoption Center. Nationwide, 40 percent of the IAC's adoption placements are with same-sex couples. "[In Georgia], there are some counties that will allow a gay couple to complete a [joint] adoption," says Burfeind. "We're very careful of that -- to make sure we are not putting our couples' adoptions in jeopardy."

The IAC specializes in open adoptions, working with children's birth mothers and people looking to adopt. In Keith's case, all of his children were adopted from the Department of Children and Family Services. And all of them have health challenges. These illnesses were never an issue for Keith. In fact, it is what motivated him to adopt.

"I hated the fact that there were so many young African-American males in the Department of Family and Children Services' database, and no one was coming forward to adopt [them]," he explains. "Especially if [they have] special needs, a lot of people just do not want to deal with that. ... I hope people will look at the adoption of children as an alternative [for creating a family], especially gay men."

Keith admits that being a single gay man and raising three children was a hurdle at times, especially when it came to dating. "It was really difficult to meet and date. That's not even an option when you have three kids. ... Most men don't want to walk into a situation with a man who has three kids."

That changed when David and Keith met at a social retreat three years ago. They believe that each of them having their own children played a large part in the romantic connection. After dating for two years, David and Keith decided to mesh the two families together.

David and Keith say the most challenging part of being gay fathers is not knowing a lot of other gay men who are parents and being able to share experiences. But that doesn't make parenthood any less rewarding.

"For David and I to actually have that little Brady Bunch thing going and for it to actually work is a wonderful thing. We just wish we could really see more of that."