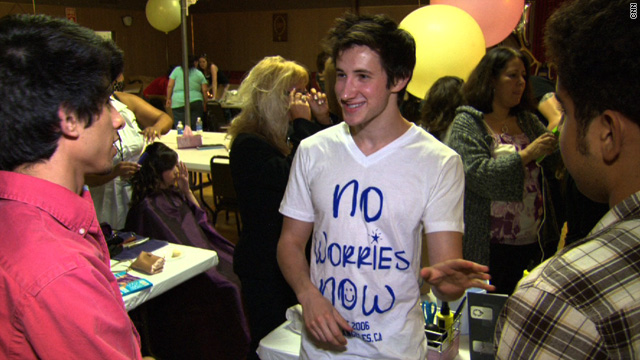 Fred Scarf founded No Worries Now to honor a friend he lost to cancer.
STORY HIGHLIGHTS

"Living with a life-threatening illness every single day, you just wonder if this could be your last day," said Rahm, who was diagnosed last summer with a rare bone cancer called osteosarcoma.

But last week, the 18-year-old from Chatsworth, California, was able to receive her diploma and attend a one-of-a-kind prom with nearly 200 other teenagers also living with a life-threatening illness.

The annual No Worries Now prom is the brainchild of 20-year-old Fred Scarf. The event is intended to give the teens an opportunity to celebrate their life and their youth in an environment of acceptance and camaraderie.

"Losing my hair was worse than hearing that I had cancer," Rahm said. "At the No Worries Now prom, people can look at me and understand what I'm going through, and I definitely feel a different intimacy with them because of it."

Scarf, a Cornell University junior, started the No Worries Now Foundation in 2006 to honor his best friend, Shiri Gumbiner. Gumbiner passed away at the age of 16 from osteosarcoma, the same cancer that Rahm is fighting.

"We planned to go to prom together," Scarf said. "Prom is like the ultimate milestone that's saying you braved the four years in high school. That was one of the things you really hoped to do. And we never had a chance to do it."

Scarf wanted to make sure the memory of his friend lived on.

"I didn't want to forget her charm, how funny she was ... how optimistic she was," he said. "I just knew that I had to do something."

Scarf initially conceived an organization to raise funds for osteosarcoma research. But he quickly changed course, realizing he could better capture Gumbiner's spirit by providing teens with a much-needed break from illness.

"For these kids, these battles go on for years," Scarf said. "And this is their life. And they're continually running a marathon, and they're never going to get a break. These proms provide this break, create a milestone and capture these kids' imagination."

The No Worries Now prom is geared toward teens who have or have had a life-threatening illness. A network of pediatric hospitals and organizations helps spread the word to teens, who can RSVP for the event on the foundation's website.

Scarf's foundation offers all attendees and their guests donated dresses, tuxedos, shoes and jewelry. They can also receive free hair, nail and makeup services, as well as wigs.

This year's prom was held at Sony Pictures Studios in Los Angeles, and it had a Hollywood feel. Actresses Anna Kendrick and Monique Coleman were on the red carpet with the prom attendees, and rappers Snoop Dogg and Ice Cube were among those who appeared in pre-taped message videos.

The event featured DJs and a professional break dance troupe. Caricature portraits and a photography booth were also included, as well as all-you-can-eat dinner and dessert.

For Samantha Ashburn, this year's prom was particularly precious. The 15-year-old's battle with osteosarcoma resumed in May after 2½ years living cancer-free.

"I have a list of things I want to do, but each hour of the day I think of something else," said Ashburn, who has been to four No Worries Now proms. "So I don't even go off [the list] anymore because I don't know how long I have here. So I want to live it up and be wild and make my mom have a heart attack."

Since 2007, more than 400 teens living with life-threatening illnesses have attended No Worries Now proms. The event has been held only in California, but Scarf aims to expand to multiple states as soon as next year.

When asked what his late friend would think of the work she inspired, Scarf said, "I think she'd be very proud. ... And I just hope that through this foundation ... I can kind of be as fearless as she was."

Want to get involved? Check out the No Worries Now Foundation website at www.noworriesnow.org and see how to help. You can nominate a 2010 CNN Hero at www.cnnheroes.com.