I believe in evolution, he doesn't 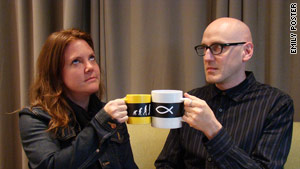 Some couples can agree to disagree, but some issues may be too deeply felt to allow compromise.
STORY HIGHLIGHTS
RELATED TOPICS

I have been dating my boyfriend for about three months. We get along great and he would do anything for me. We just have one problem. He doesn't believe in evolution and I very passionately do. We got in a discussion about it, which quickly turned into a huge fight.

Although my current career has taken me down a different path, I have my masters degree in biology concentrated in ecology and evolution so I know a little something about it and pretty much dedicated my entire education to learning about it. He is an engineer and very smart, but I just found out that he used to be really religious, hence his disbelief in evolution.

The Frisky: 10 famous females who have a twin

I tried to answer his many misconceptions about evolution as best I could without being prepared for such a heavy debate, but he persisted in refusing to listen to the evidence I presented and even compared me to a religious zealot who has been brainwashed by my schooling. I know that when I feel passionately about something I can get quite worked up and come across as condescending.

The Frisky: 6 absurd gender stereotypes that appear to be true

I understand that many couples have different beliefs and make it work so I know that we can too. However, I don't want us to have restrictions on what we can or can't discuss in a rational manner.

So I guess what I am asking is how do I broach this topic in a manner that doesn't turn into a huge argument? Should I just accept that we may never agree on the topic and try to get over it?
-- The "Mad" Scientist

The Frisky: 6 celebs talk about their (cheap!) first dates

You need to decide on a couple of things here, Ms. First, is it a boyfriend you want or a student? Because you can't have both.

If it's the former, you need to decide how important it is that your partner's beliefs align with your own. We aren't talking about a casual interest in the Yankees versus a vague support for the Red Sox here.

Evolution and creationism are beliefs that are at the basis for entire life philosophies, values, and behavior. They can be the lens through which people view their world, particularly if they're very passionate about their beliefs, as you say you and your boyfriend are.

The Frisky: 10 stars who (maybe) have secret babies

If, at three months in, you're already having huge arguments over your differing viewpoints, imagine how difficult things could be after the novelty of a new relationship wears off. And don't even get me started on the problems that could arise if you were to marry and have kids.

You're right that couples who have different beliefs can "make it work," but the key to success is mutual respect and a commitment to compromise. If you can't even have a real discussion in a "rational manner," as you say, with your boyfriend about your differing beliefs without tuning each other out or resorting to name-calling, I can't imagine you have much chance at a harmonious future together.

But if you're determined to see this through, you need to back off on your "teachings" and accept that your boyfriend has arrived at his beliefs the same way you have and doesn't seem open or interested in changing them. If that simply isn't something you're able to accept, I think it's probably time to move on.