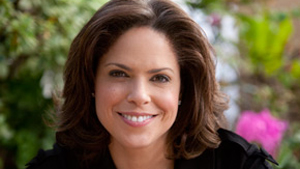 The following is an excerpt from "Latino in America" by Soledad O'Brien with Rose Marie Arce. Published by arrangement with Celebra, a member of Penguin Group (USA), Inc. Copyright (c) Soledad O'Brien, 2009.

When you have a name like María de la Soledad Teresa O'Brien, you have a lot of explaining to do. My mother is black and also Latina, more specifically Cuban. She is a devout Catholic who credits the Virgin Mary with any success she's had in this country. But it was my father, a man who spoke no Spanish, who chose the name María de la Soledad to honor the Blessed Virgin Mary of Solitude ("solitude" in Spanish is soledad).

My name is altogether too long for Americans, who've always struggled with it. It's even too long for a driver's license. African-Americans assume I'm named after the notorious Soledad prison or Mount Soledad in California. Latinos want to know if I'm lonely. That doesn't fit because I grew up with five siblings and I have four kids of my own, so I'm not lonely at all, though I do often seek solitude, the actual meaning of my name.

My father was Irish and Scottish, but from Australia, and my parents added Teresa when I was confirmed. My parents named all their children after people they loved and admired, and when it got to me, it was the Virgin Mary's turn. When I married, I thought about taking my husband's name (Raymond), but I realized that, odd as it is, the name I have works. I have a mass of kinky hair, light brown skin and lots of freckles. I'm black and Cuban, Australian and Irish, and like most people in America, I'm someone whose roots come from somewhere else. I'm a mixed race, first-generation American.

My ethnic roots are relevant when you look at the broader picture of who brings us the news. Who you are matters oh so very much when, according to the National Association of Hispanic Journalists (NAHJ), just 6 percent of the people working in TV news and 4 percent of the newspaper reporters in this country are Latinos. The NAHJ presents a report on media diversity called the "Brownout Report," and it determined that less than 1 percent of the stories aired by the networks include Latinos, and that tiny amount is heavily concentrated on immigration, crime and drugs.

It's hard to be the lone ethnic face in the room. People look to me to explain a community that is diverse and ever-changing, a community with which sometimes I don't have a great deal in common. There is so little in-depth reporting on people of color that I set the bar high for myself and the people around me. I see the job I have now as my opportunity to get good reporting about black and brown people on TV, as a chance to bring people together, and to tell a fair and accurate story of communities of color, not just rehash stereotypes for the sake of drama. O'Brien wanted to share her multicultural experience »

More than anything, the stories have to be good, the story lines compelling and the people in them interesting. If no one watches, then I've accomplished nothing. The communities I cover have their own high expectations. People see this as a rare chance for good reporting about their communities to make it to television and they expect a lot. It can be exhausting to be reduced to your race and ethnicity. You can be made to feel bad about where you come from or feel bad about succeeding or feel like you're not a part of a community because your experience is different. My Cuban-born mother is wonderful on this topic. This woman who didn't teach her children Spanish did teach us pride.

CNN, a part of the Time Warner company, lives for news about everything and anyone. In the office, the bosses openly discuss the need for a diverse staff and diverse stories, and each time we draw new viewers, the effort intensifies. There is an active diversity council, aggressive diversity training, regular speeches from the highest officers of the company about how our country is changing and CNN has to be a part of that change. They see the demographics of the future and know they have to look at their hiring and reporting practices so that they appeal to the widest possible audience.

As CNN saw our growth in African-American viewership, they affirmed a fundamental truth of news coverage -- people will watch you if they see themselves in what you report. It doesn't hurt if the people doing the reporting look like them, too.

In 2007, CNN's coverage was altered dramatically by the launch of a series called Uncovering America, and the entire staff was asked to find compelling stories about the broadest range of people possible, not just people of color but folks of every race and ethnicity from all walks of life. That series was followed by the launch of a documentary project called Black in America, and I was tapped to be the correspondent.

The yearlong effort of Black in America was exhausting for me. I was one of a handful of black voices on the staff, and each day was a meshing of ideas and backgrounds and cultures. In other words, we argued a lot. I compiled everything. I learned new things about the black community that I'd lived in and covered my entire life. The result was a four-hour documentary that earned terrific reviews, got more viewers than almost any CNN documentary and started a discussion about the community of which I continue to be proud.

Not everything was perfect.

It's critical in covering a community well to report both the good and the bad. I learned so much about reporting on race and some unexpected lessons about the stress of being a woman of color in the media. But by the time the project ended, I felt like I had started an important conversation about the struggles and the successes of the African-American community.

My first thought was what a terrific opportunity this was for me! After so many years of fighting for fair and accurate coverage of people of color, I finally had a chance to work on a wide-ranging project that could show all Americans a fuller picture of who Latinos are and what they mean to this country. I vowed to give voice to the part of the community I knew, an optimistic, family-centered people who infuse U.S. culture with the warmth of their humanity.

My community embraced this project from the outset with an enthusiasm I'd not expected. Total strangers approached me with advice and assistance. Over and over, I was asked to please report on the people who are so often ignored, the Latinos who do not reflect the "illegal alien" who crosses the border "to steal American jobs."

People, many of them my own co-workers, asked me to push past the rancor of the immigration debate, which has strayed from being a discussion of policy and law enforcement to one that demonizes and stereotypes and hurts people whether they are illegal immigrants or not.

Latinos saw this documentary as a wonderful opportunity to showcase the cultural struggles and contributions of Latinos; to focus on education, community and faith and show the broader public a more complete picture of how we live.

It was clear that the community felt starved for good solid coverage. No one asked me to do a snow job. Just please don't reduce us to crime, immigration and racial conflicts, they asked. Folks just didn't want to see their community hurt anymore and were very blunt about it. One afternoon I had lunch with Lupe Ontiveros in Los Angeles. She is a beloved Latina actor who has been reduced to the role of the maid or the nanny in scores of movies. I asked Lupe to be a major character in our documentary, and she offered an enormous amount of assistance.

When I left the table she turned to my producer and said bluntly in Spanish, "Please, just don't f-- us."

In the end, that wasn't hard because there are so many great untold stories to tell about Latinos that I knew would interest an audience of any racial or ethnic origin. The numbers of Latinos are exploding and spanning out into places where Latinos have never been seen before. Their impact on the United States is awesome.

I knew from the outset I had to have as broad a focus as possible to cover such a large story. My team of producers, photographers and editors had to look at the Latino community through many sets of eyes. I urged our team to break new ground, to not end up rehashing the same old story told of any minority community, that there are Anglos unhappy they've arrived. That is not what it means to be Latino in America. We had to step back and watch a more complex human story unfold.

As we did our reporting, I realized quickly how challenging this was going to be. Latinos are an extremely diverse ethnicity that can be of any race and have many different origins, history and traditions. You can't easily group people who come from as far away as Buenos Aires, Argentina, and Rio de Janeiro, Brazil, with people of Mayan, Incan and Taino descent who have mixed with Spaniards, Africans and Jews. We are about so much more than where we came from or how we look.

The essential point is that we don't come together in a real way until we set foot on U.S. soil. That's when our "Latino" experience begins. Latino is an American identity.

It is a word to describe Americans who are drawn to each other by this intangible cultural link, the similarity of the way we run our families, our devotion to faith, the warmth of our personalities and our connection to a history that recognizes no border to the south.

Latinos are a people who celebrate the new culture they've created in the United States while struggling each day with whether we need to assimilate or integrate into this new society. We ask ourselves what good things we want to preserve from our culture and what American values we want or need to adopt. And that question never goes away, not one, two or three generations beyond immigration.