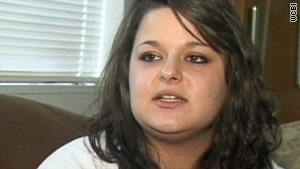 Constance McMillen said she was told not to take her girlfriend to the prom or wear a tuxedo.
STORY HIGHLIGHTS
RELATED TOPICS

(CNN) -- A Mississippi lesbian Tuesday won a judge's backing for her contention that her First Amendment rights were violated when her high school refused to allow her to attend her prom with her girlfriend.

But U.S. District Judge Glen H. Davidson refused to order the Itawamba County School District in Fulton, Mississippi, to hold the dance it had canceled over the matter.

In his 12-page order, Davidson also ruled that Itawamba Agricultural High School's denial of 18-year-old Constance McMillen's request to wear a tuxedo to her prom was a violation of her rights.

"The record shows Constance has been openly gay since eighth grade and she intended to communicate a message by wearing a tuxedo and to express her identity through attending prom with a same-sex date," Davidson wrote.

"The court finds this expression and communication of her viewpoint is the type of speech that falls squarely within the purview of the First Amendment."

When school officials told McMillen she could neither take her girlfriend to the prom nor wear a tuxedo to the event, the senior went to the American Civil Liberties Union, which demanded the school change its policy. In response, the school district canceled the prom altogether.

Davidson denied a motion for an injunction filed by McMillen against the school district's superintendent, the school's principal and its assistant principal asking the court to order that the April 2 prom be reinstated, saying that parents were planning a private event to be held on that date for all students, including McMillen.

Requiring school officials "to step back into a sponsorship role at this late date would only confuse and confound the community on the issue," he said.

Both sides in the dispute were happy with the outcome.

"It sets a legal precedent for gay and lesbian students all over the country that they have the right to bring a same-sex date to the prom and also to wear gender-nonconforming clothes to the prom. We were looking for a ruling that what the school did was violate her rights," Sun said.

School board attorney Michele Floyd said the school district was also pleased with the decision.

She said the parent-sponsored event, which may be called a ball instead of a prom, is to be held in Tupelo, 19 miles away.

But ACLU's Sun said McMillen had not received an invitation. "We haven't heard anything about this private prom other than what this school district has told us," she said. "It remains to be seen whether she will be able to attend the private prom."

McMillen's case is going forward on a damages claim and the ACLU's request for attorneys' fees, she said. "She got what she wanted, and now it's just a question of what the damages might be in her case."

"I never thought the school would try to cancel the prom and hurt everyone just to keep me and my girlfriend from going together," McMillen said last week in an ACLU news release. "A lot of people have made really generous offers to pay for a prom somewhere else, which I really appreciate. But all I've ever wanted was to be able to just go to my own school's prom with my girlfriend."

At the center of the lawsuit is a February 5 memorandum from the school to students that said prom dates must be of the opposite sex.

Superintendent Teresa McNeece also told McMillen that she and her girlfriend could be ejected from the prom if other students complained about their presence, according to the documents.