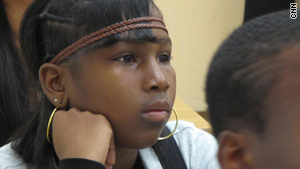 Los Angeles, California (CNN) -- For most of this school year, Sharail Reed has dreaded going to her third-period history class. In a very real sense, the class hasn't had a teacher all year. Instead, a parade of no fewer than 10 substitute teachers has been placed in charge of the class.

The eighth-grader says it's like being stuck in a revolving door.

"I don't really count them anymore," she said. "It makes the whole classroom situation kind of awkward, where the teacher doesn't know your name, and you don't know the teacher's name. Starting fresh."

Starting fresh? Ten times in one semester? And it's not an isolated incident.

In Los Angeles, as elsewhere, the layoffs started with those teachers with the least experience. That hit Markham Middle School especially hard.

The principal, Tim Sullivan, says he had recruited a team of idealistic young teachers to his campus. They were eager to face the challenges of teaching in an inner-city school. Instead, they found themselves on the front lines of the layoffs.

Recruiting replacement teachers to move to Markham from other schools in the district hasn't been easy, and Sullivan said he doesn't see it getting any easier in the next couple of years. Budget shortfalls are expected to mean more teacher layoffs this summer.

But the American Civil Liberties Union isn't buying it.

The organization has filed a lawsuit alleging that the teacher layoffs constitute a violation of the constitutional rights of inner city students to an education.

Attorney Catherine Lhamon, who also is working on the lawsuit, said, "There is something profoundly wrong when children in some schools lose two-thirds of their teachers while children in other schools get to keep all their teachers and continue learning in a stable educational environment."

Rosenbaum says the lack of money is not an excuse.

Markham English teacher Nick Melvoin agreed: "To me, it's obvious that students with the most need should get the most resources, not the least."

Markham Middle School sits in the middle of Watts. It is a neighborhood riddled by poverty and gang violence.

On the day CNN visited, the campus was locked down for two hours because two gun-wielding men had been spotted in the neighborhood. Children were locked in their classrooms as SWAT teams pored over the schoolyard, armed with assault rifles and wearing body armor. Canine teams searched room to room for the gunmen.

CNN was assured that this was a rare occurrence, even in Watts. What is not rare is the classroom crisis that remains ongoing.

Sullivan says that given proper staffing, he can turn the school around. "We had an all-star team. I need to be able to bring that all-star team back with some consistency for two or three years."

District officials say that doesn't seem likely. The school district's human resources chief, Vivian Ekchian, said, "This year, it has actually become worse. Our budget deficit is right now $640 million. And we will have no choice but to lay off employees again."

But if the ACLU lawsuit is successful, those layoffs won't be at Markham Middle School. The suit seeks a court injunction to stop further layoffs at schools that were hit the hardest last year.

If the lawsuit is unsuccessful, Sharail Reed's classes could again be thrown into chaos.

She is a good student but says she can see her future slipping away.

"I'm in the eighth grade. You have to start focusing and learning all you can," she said.

And Reed realizes that she is working with a disadvantage: "I don't have the right teachers."