Small gifts for vets make a large impact -- for everyone 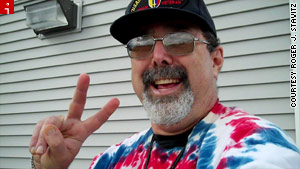 Roger J. Stavitz said brightening the days of fellow veterans at a VA clinic is part of "my own therapy."
STORY HIGHLIGHTS
RELATED TOPICS

(CNN) -- As our nation salutes the men and women who risked their lives for our country, CNN iReporters share the innovative ways they made a positive impact on veterans' lives.

iReporter Roger J. Stavitz decided to give back to the VA clinic in Lincoln, Maine, that he credits with saving his life from post-traumatic stress disorder and diabetes.

This Vietnam vet got his hands dirty in the grounds surrounding the new VA building, planting $500 worth of flowers to bring some color and fragrance to his brothers in arms. This small change made a major transformation in not only the austere building, but also Stavitz himself.

"The trip is 90 miles, round trip, but it is worth it for my own therapy," Stavitz said.

"It pleased the veterans, it pleased the staff, and veterans would stop to talk to me about what I was doing."

Those chats about shared experiences became an important part of their healing process. Stavitz recently visited his flowers, marveling that they were still alive at this time of year in Maine.

"They looked like old friends," Stavitz said, "the gift that keeps on giving."

He admits his gift may be small, but believes it is not insignificant. He hopes that people find one thing that makes them smile, like planting flowers does for him, and think about how that small act can help themselves as well as those who have given so much to our country. 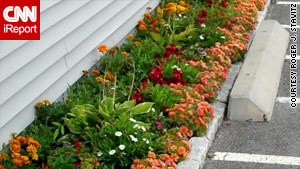 Stavitz's garden cost him only $500, but his hostas and marigolds make a long-lasting impression.

For Debbi Fisher, it all started because of Root Beer, her late husband's horse.

"He needed a job!" laughs Fisher, who founded the Rainier Therapeutic Riding Program in Washington state. The program, near the Joint Base Lewis-McChord, is the Northwest's first branch of the NARHA Horses for Heroes program.

In this program, healing occurs on horseback. The horses' mission is to help injured soldiers overcome the difficulties of returning home after battle, especially physical and mental disabilities.

Each soldier is paired with a horse and a lead volunteer for an eight-week program, completely free of charge.

"We teach them to understand how the horse thinks," Fisher said, "to use the thinking side of the brain instead of the reactive one. And all of a sudden a light bulb goes off, and the soldiers think, 'I can apply this, too.'"

By developing a close relationship with their horse during their time at Rainier, soldiers learn to trust again in a way that is difficult for them to do with people.

"My heart has always been there, and they have done so much for our country... This really helps them get back to society."

For Fisher, who has a son in Afghanistan and a daughter in the Air Force, it is a personal joy for her to make this difference.

See work being done at the Rainier Therapeutic Riding Program, on CNN iReport. 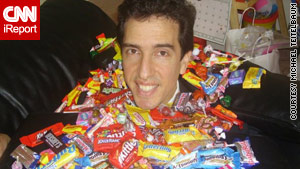 How does a dentist thank the troops? By sending them lots and lots of comforting candy.

Dentist Michael Teitelbaum was looking for a way to help his young patients avoid cavities, when he came up with a campaign that would also benefit our soldiers' sweet tooth.

After every Halloween he offers a candy buyback, where candy-sharing children receive a dollar coin for every pound of candy they bring in for overseas troops.

This November, he has already received about 200 pounds of candy. In eight years of Teitelbaum's candy buyback program, he has collected over 2,000 pounds.

"The kids that are quick to give up their candy have the Halloween bags that have been clearly picked clean of their favorite treats," Teitelbaum said.

He helps those children struggling to give up their Halloween haul with a certificate of patriotism, a picture, and of course, the dollar coins.

The soldiers, Teitelbaum said, give away much of the candy to the children in Iraq and Afghanistan, who have never tasted American sweets. But he has also received letters that the troops devour a lot of it themselves, and want more.

"Over there they really don't get to celebrate Halloween or other holidays," Teitelbaum said, "so it gives them a little taste of home."

See the candy donations pile up, on CNN iReport.

Have you helped make a positive impact for our Veterans? Share your story with iReport and Impact Your World.