How one man's shame sparked a 300-pound weight loss 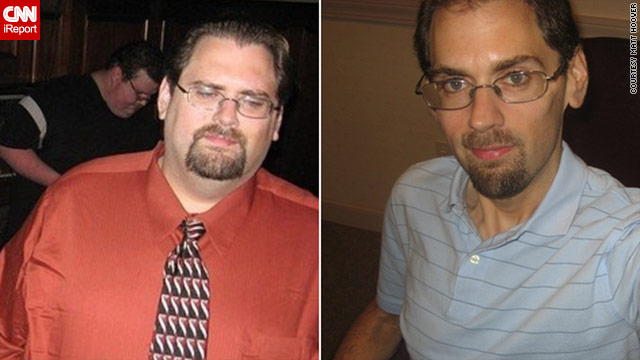 Matt Hoover lost about 200 pounds, from his starting weight near 450 pounds in 2007.
STORY HIGHLIGHTS

(CNN) -- Lugging a nearly 500-pound body, Matt Hoover was unhappy. Like many Americans, he knew how to lose weight, but was paralyzed by inaction.

After a lifetime of struggling with obesity, it took one moment, one spark, to get the 37-year-old statistician moving.

And that defining moment was mortifying.

People need the epiphanies that jerk them into action, said Timothy Ferriss, author of "The 4-Hour Body."

"I think one of the reasons many of the [weight-loss] programs are abandoned is that the pain isn't painful enough," he said.

To stay motivated in the new year, as many people resolve to lose weight, Ferriss suggests having some sort of public accountability. The public scrutiny -- even from friends -- can help motivate and apply some pressure.

Jared Fogle, the Subway spokesman, who recently lost weight and ran the New York marathon, said the public fascination with his weight-loss helps him keep it off.

"When you're in public scrutiny like that, it's never easy," he said. "You look at someone like Oprah Winfrey and she's always dealt with that. At the same time, it's giving me more motivation to definitely keep the weight off.

Read a Q&A with Fogle

"To lose 240 pounds and get my life back like I did 12 years ago was an important step for my life. But at the same time you realize, keeping it off is just as important. Living in the spotlight, I look at it as extra motivation."

Hoover was one of those who told himself he'd eventually lose weight, but he couldn't get started.

By fall of 2007, Hoover weighed about 470 pounds. He's not sure, because his scale only measures up to 450 pounds. The Somerville, Massachusetts, resident had lost weight before, but the pounds had returned with a vengeance.

It started one November when Hoover made plans to hang out with his friends.

"A friend of mine was in from out-of-town," said the iReport contributor. "She's from Australia and it was her first time in the U.S. I was showing her around Boston."

He invited his friends to join them for a dinner at an Italian restaurant. There was just one problem.

"I couldn't fit into the chair they had there," Hoover said. "It was really embarrassing -- just a horrible scene. They had chairs with arms. You had to be a certain width."

He couldn't stay for dinner. There was no place to sit.

"I told them to have fun, that I would go out and meet up with them later. I went to a coffee shop."

There, he sipped coffee "feeling miserable and sorry for myself."

"My size was preventing me from doing things that other people took for granted."

Then a few days later, his friend posted online a photo of him at the gathering.

"That's when I saw the photograph," Hoover said. "I just knew I had to do something. I couldn't believe that's how bad I looked."

The daily indignities -- feeling short of breath when he walked, the 5X clothing size he had to wear -- made him unhappy.

When he would fly for business trips, he would have panic attacks because he would have to ask for a seat belt extender and he might encroach on someone else's seat.

With one-third of U.S. adults and 17 percent of children obese, these anxieties are common. In hospitals, some obese patients can't fit into hospital gowns. The blood pressure cuffs aren't wide enough to fit a person's arms.

"There are so many subtle ways in the world where people are placed in situations, where there is humiliation and embarrassing moments caused inadvertently by well-meaning people," said Martin Binks, a psychologist.

But that kind of negative experience can be harnessed.

"The moment you have a humiliating experience in a public place -- that won't carry you through a lifetime of motivation. It gives you impetus to start," Binks said.

"Whatever is motivating you in the moment, use it -- so long as it's not harmful to you," Binks said.

Embarrassment or fear of death usually does not sustain people's commitment to change.

"The fear of a heart attack dissipates quickly," said Binks, clinical director and CEO of Binks Behavioral Health PLLC. "We aren't motivated by fear or our medical future. People with diabetes still don't follow their plan. Being scared isn't going to motivate over the long-term. It's finding things that are doable."

There's no need to wait for an embarrassing moment or a health scare to get the incentive.

"It's a moment you can create, like taking before-or-after photos or measuring body fat to get an accurate picture of your current state," he said.

The moments Hoover described weren't enough to sustain him through a three-year weight-loss journey, but it got him started. He ate smaller portions and took daily walks. The first 120 pounds came off.

"When you're that big, you can lose weight pretty quickly," he said.

But his journey was by no means smooth.

"There have been ups and downs," Hoover said. "It hasn't been a perfect process for the last three and a half years. I've slid a little bit."

The old habits and mindless snacking would creep back and so with the weight.

To be held accountable, he told his friends about his weight-loss efforts. To stay motivated, Hoover made a bet with his brother to see who could lose more weight. To get support, he joined online dieting communities. His mindset changed as he walked more.

"When you do exercises, it makes your eating better and gives you a healthy mindset. You don't want to screw up after walking four to five miles by eating a Big Mac."

When his weight-loss started to plateau, he joined Weight Watchers and lost another 150 pounds. Hoover weighs 185 pounds.

"I'm a runner now. I've run 10Ks and trained for half marathons," Hoover said. "I couldn't have done that before. Everything about my life has changed. I feel great."