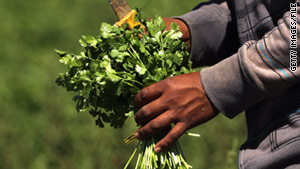 (CNN) -- A Texas produce distributor has recalled nearly 7,000 cases of cilantro and curly parsley after samples in Quebec, Canada, and Michigan tested positive for salmonella, the company said Monday.

The "precautionary, voluntary recall" announced Monday pertains to cilantro and parsley from J&D Produce, Inc., packed between November 30 and December 6, the Edinburg, Texas-based company said in a statement. Cilantro and parsley processed and branded as Little Bear between those dates can be taken to retailers for a full refund.

Also Monday, the Food and Drug Administration announced a source of a salmonella outbreak that had sickened at least 89 people in 15 states and the District of Columbia.

Tiny Greens' alfalfa sprouts and spicy sprouts (which have alfalfa sprouts plus radish and clover sprouts) were distributed in 4-ounce and 5-pound containers to farmers' markets, grocery stores and restaurants including Jimmy John's.

About 23% of those sickened in that outbreak were hospitalized, the Centers for Disease Control and Prevention said last Thursday. No deaths have been linked to the outbreak.

The separate J&D Produce recall, meanwhile, came after independent tests found salmonella on the company's parsley in Quebec and its cilantro in Detroit, Michigan, both of which came from the same processing line in Texas.