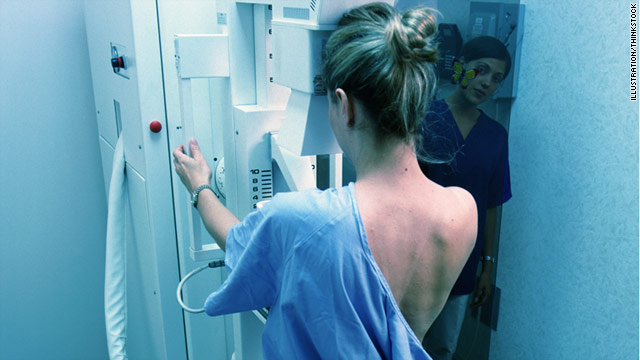 Up to 12,000 women from 40 to 49 could be saved by yearly mammograms over a 10-year period, a cancer expert says.
STORY HIGHLIGHTS

(CNN) -- If you're a woman in your 40s, you probably remember how checking the health of your breasts became a point of national contention last year.

The American Cancer Society, the American College of Radiology (although some would argue that radiologists have financial incentive in frequent screenings) and other organizations have continued to support women getting yearly mammograms from 40 onward.

The task force came back in December 2009 to say it had expressed the guidelines poorly. Women in their 40s should not be denied mammograms, but the screening should not be "automatic" either, Dr. Diana B. Petitti, vice chairwoman of the task force, said during a House Energy and Commerce Subcommittee hearing at that time.

But in the year since then, research has continued to suggest that women in their 40s need annual mammograms, including a study presented this week at the Radiological Society of North America meeting. At the same time, doctors at breast imaging centers are not seeing fewer patients in their 40s, and women in that age group say they're not waiting until 50 for their next screening, despite the confusion and heated controversy over the task force recommendations.

The situation has calmed down, but Michele Samuels, 48, of Mill Valley, California, is still angry. Her sister could have died of breast cancer if a mammogram did not detect it at 47.

"To tell women that it's not important, that it couldn't save their life because it might be inconvenient to some people, I really think is a crime," said Samuels.

A landmark study on breast cancer in Sweden in the journal Cancer, published in September, backed that up. And a new study from Britain also supports the suggestions that women should get yearly mammograms from 40 and up.

The new study is small -- participants were 156 women with breast cancer from the London Breast Institute. But it bolsters the idea that mammograms' value in the 40s outweigh emotional and financial burdens associated with them.

In the 10% of participants who'd had mammograms every year in their 40s, the likelihood of having had a mastectomy was less than half of those who never had a mammogram before, said Dr. Nicholas Perry, who presented the results at the Radiological Society of North America meeting this week.

Dr. Ned Calonge, chairman of the preventive service task force, told CNN he can't say whether a single study could change the recommendations, but the group will consider it when it gets published and decide whether the results are compelling enough to rethink the current guidance.

One issue with the study is that it is retrospective, meaning the results did not come from women who chose to have mammograms or not as part of the study. There could be other factors influencing the outcomes, Calonge said. Also, it only looked at mastectomies, so it could be that the women were living longer because of more aggressive therapies, he said.

One useful lesson to take away from the task force recommendations is that cancer screening carries harms and benefits, and clinicians have not been doing a good job of having balanced conversations about mammograms, said Dr. Therese Bevers, medical director of the Cancer Prevention Center at the University of Texas M.D. Anderson Cancer Center.

For instance, some women have asked about having mammograms every six months and yearly ultrasounds. Neither of these is recommended for women with average risk. For those with a genetic predisposition, strong family history or other risk factors, MRIs are sometimes used, but women who don't have those risk factors sometimes want them, too.

"We have oversold the public on the benefits of cancer screening,such that they think a little is good, a lot is better, and there's no downside to it," she said.

In fact, there are costs to screening. There's the monetary cost of course -- more frequent exams are expensive -- but also the likelihood of getting a false positive goes up.

In other words, you may get a result that says you have breast cancer when in fact you don't, but will have to go through more invasive procedures such as biopsies to confirm that.

And that's why Stephanie Marchant, 43, is unhappy and frustrated about going for her next mammogram. She went for her first one at 42 and had to return for a second and then a biopsy because of a speck on the first image.

"I'm sobbing my eyes out, shaking, scared to death," she said of the biopsy. "It was terribly traumatic and invasive and painful."

That speck turned out to be calcifications, not cancer. And the procedure came with a $4,900 price tag, which was less than her insurance deductible.

"It turned me off to the whole idea of how important it was to have this done," said Marchant, of Atlanta, Georgia. Had the task force recommendations come out before her ordeal, she might have waited until she was 50 to begin mammograms.

Bevers' office received many calls from patients a year ago canceling their annual mammogram appointments because they thought their insurance wouldn't cover the screening, and they didn't want to be stuck with the bill. She doesn't know whether those women have since rescheduled their appointments, but she has not heard of anyone not getting coverage.

Some insurance programs did cut back on funding for mammograms in their 40s in the last year, said Dr. Otis Brawley, chief medical officer of the American Cancer Society and CNNhealth.com's conditions expert. But the California Department of Public Health announced Wednesday that its Every Woman Counts program would reopen its doors to women 40 and older for breast cancer screening.

New enrollment had been frozen since January 1 because of fiscal challenges, the department said.

"A lot of women ended up just confused, and we probably hurt some people in their 50s and 60s especially by causing the confusion, number one, and two, by taking the spotlight off of all of the things we know save lives that we know are not being done," he said.

The task force pointed out that if you screen 1,000 women age 40 every year until 49, there will be more than 650 callbacks for re-evaluation over the 10 years. Many of those women will be scared about further testing, which may come back negative, meaning the mammogram or other procedures had falsely detected cancer.

Brawley hasn't heard of any women stopping annual mammograms because of the task force recommendations, but he does get calls from women who have been so frustrated with the mammography process that they stop going. Research has shown that some women give up on mammograms before their 50s and 60s, when it's far more beneficial, Brawley said.

Lisa Hall of Huntsville, Alabama, says she's too cautious about her health to wait until 50 for her next mammogram. Since her mother died of esophageal cancer without any risk factors and a friend's colon cancer was caught with a colonoscopy, Hall, who is 48, places a high value on screening and isn't putting off her next mammogram.

"Even if I didn't have the insurance coverage, I would try to find a way to get the annual screenings," said Hall, author of "Taking Charge of Your Own Health." "It's worth our time and effort and resources to prevent and detect early as many things as we can."