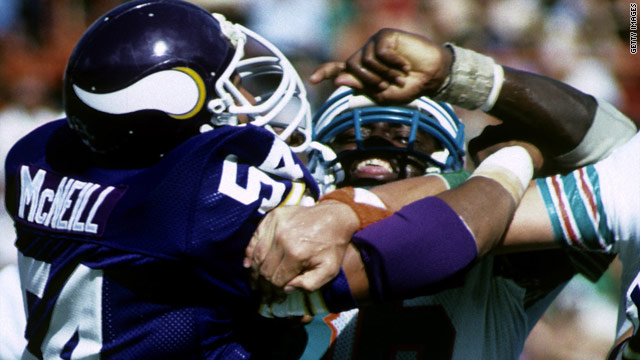 (CNN) -- Today is a rare day. Fred McNeill is animated, beaming. Sunlight glances over his face as he relives the glory days 30 years ago when he was a professional football player for the Minnesota Vikings.

McNeill is talking about the 1977 Super Bowl, the time he flung himself across the field, blocked a punt, then scrambled to recover the ball near his team's own end zone.

And yet, details about where he was just yesterday, the people he may have met, frequently elude him.

"It's harder, yeah, it's, it's hard to remember things, yeah," said McNeill, stammering and struggling to piece together his thoughts.

Not long after his glory days ended, in the mid-'80s, McNeill's memory (he is only 58 years old) virtually vanished. He became prone to fits of rage and depression.

McNeill is one of several former NFL players whose life began spiraling out of control years after leaving the playing field. Recent studies suggest the reason may be blows to the brain they suffered on the football field.

Kurt Warner: Playing through concussions 'part of the game'

"We know where it's coming from," said McNeill. "It's coming from the concussions and the impact the players have had playing football."

That impact could be manifesting as brain damage, according to posthumous studies of several former players' brains. Experts believe a buildup of tangles in the brain called chronic traumatic encephalopathy (CTE) may be to blame.

Dr. Bennet Omalu, a forensic pathologist and co-director of The Brain Injury Research Institute, was the first to describe CTE in American football players.

"There is no question about it, Fred [McNeill] is suffering from CTE," said Omalu, who has observed McNeill and discussed his symptoms with family members. "He has all the symptoms I have observed in all the other former players. His clinical profile is almost a perfect reproduction."

Omalu said he identified CTE in the brains of Mike Webster, Terry Long and Andre Waters, all deceased former NFL players. He examined thin slivers of each player's brain and spinal cord tissue under a powerful microscope and found that each player's central nervous system was riddled with CTE's characteristic brown tangles.

CTE is a brain disease that closely resembles dementia, which is usually diagnosed late in life. It manifests as dark tangles in the brain and spinal cord that may alter functioning in regions that control sexual impulses, emotion, even breathing. Omalu said that among players he has examined, CTE is associated with loss of cognitive functioning, loss of language, uncontrollable depression and suicidal tendencies.

"The first five cases of CTE I had attempted or committed suicide," said Omalu, who has found CTE in the brains of 30 former athletes, and added that he will soon publish a study linking CTE to suicides and violent behavior.

"There have been times that I have actually experienced a certain degree of depression," said McNeill. Sometimes, the depression consumed him. And on several occasions, when things seemed impossibly difficult, McNeill contemplated suicide.

"I was actually considering not living," said McNeill, tears glistening in his eyes. "I'd be sitting there with a pair of scissors and actually think that, man it would be so much easier if I just did this."

McNeill's brow furrows as he recalls a darker time. Suddenly he brightens: "It was a difficult time ... right now, hey this is a beautiful day."

The NFL has instituted rules, including education and fines for illegal hits that may be more likely to cause concussion. The League said it is conducting its own studies about the potential long-term effects of concussion among players. Still, the NFL has not acknowledged an association between CTE and concussion.

"It's very sad, whatever the cause is of this, for someone with this kind of neurologic deterioration," said Dr. Richard Ellenbogen, co-chair of the NFL's Head Neck and Spine Medical Committee. "No one is going to deny [McNeill's] perception of what has happened. Our committee is taking in all of the evidence and we're trying to validate what players are saying."

"We are trying to figure out a way to make sure there are not more players like him," added Ellenbogen, who is also team physician for the Seattle Seahawks.

With more information emerging about a possible link between concussion and mental problems, Omalu said he hopes many other players with CTE symptoms will emerge.

"Because NFL players have been ashamed, they did not want to come forward," said Omalu. "Now science is saying, 'You're suffering from a disease.'"

For McNeill, the difficulty of telling his story is tempered by his desire to help other players who may be suffering in silence.

"There are a number, a number of [former players] that are suffering from the impact of concussions," said McNeill. "It's a problem. Maybe no one knew that it was going to happen but it did happen."