Ten uses for your body after you die 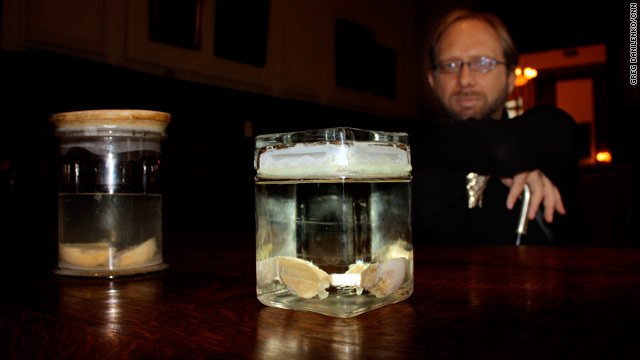 J. Nathan Bazzel donated his hip bones, which had to be replaced a few years ago, to Mütter Museum
STORY HIGHLIGHTS
RELATED TOPICS

(CNN) -- Like many Americans, you probably think you're pretty charitable. Perhaps you donate money to the needy or ill, give away your old clothes, volunteer at your child's school or participate in holiday gift drives in December.

But you may be missing something. As you're charitable in life, you could also be charitable in death. This holiday season -- Halloween -- you could start thinking about a kind of ghoulish donation: your body.

J. Nathan Bazzel has already made his plans. In 2001, he signed all the necessary documents to donate his body parts to the Mütter Museum, a part of the College of Physicians of Philadelphia. A friend of his worked there, and he knew that researchers from around the world came to look at its vast collection of body parts.

Bazzel, 38, is HIV-positive, and he wants scientists to learn from his remains.

"If just one person can take a look at my skull and kidneys, which have suffered from HIV and the drugs used to treat it, and learn something from them -- what a magnificent gift," he said.

He's so impassioned that the same year he signed the forms for his postmortem donation, he donated his right hip, which had to be replaced because of damage from an HIV drug, and then three years later, he donated his left hip.

Bazzel, who became the college's communications director two years ago, has already seen the benefits of having real human body parts on display: When high school students come in and see his hips' deformities, his lecture to them on the importance of safe sex takes on a whole new meaning.

Of course, being on display in a museum isn't everyone's cup of tea. So in the spirit of the season, here are 10 ways you can put your body to use after you die. In many cases, you can do more than one.

Nineteen people die every day waiting for an organ such as a kidney, heart, lung, liver or pancreas. Learn about organ donation, sign an organ donor card, tell your family your wishes, and don't be misled by myths about organ donation. If you like, you can donate some organs but not others.

Your bones, ligaments, heart valves and corneas might not be of use to you in the hereafter, but they can certainly help someone else. Learn about tissue donation, sign a card, and again, tell your family members you've done this so they won't be surprised when the time comes. As with organs, you can specify what types of tissues you'd like to donate.

3. Will your body to a university

Help a future doctor learn about the human body by becoming a cadaver dissected by first-year medical students. A state-by-state list of medical schools can get you started. Be sure to ask exactly what will happen to your body. While you might be used for dissection, you could be used for other purposes within the school, and you might not have much control.

Here's an interesting conversation about the respect shown by students to their cadavers.

If you'd prefer to be worked on by folks with more experience, actual, not future, doctors can learn from your body. At the Medical Education and Research Institute in Memphis, Tennessee, doctors brush up on their skills and learn new techniques; it's the training facility for organizations such as the American Association of Neurological Surgeons, the North American Skull Base Society and the International Spinal Injection Society.

Doctors get to practice (and possibly make mistakes on) the dead rather than the living. In return, the institute provides for transportation for your body to Memphis, pays for cremation once the work is done and returns the ashes to your family (or, if you prefer, to an interment facility in Memphis).

If you like the idea, you can fill out a donor form. If you'd prefer to first see where your body's headed, the institute welcomes visitors.

5. Leave your body to "the body farm"

Did you ever wonder how, on TV shows, detectives know the time of death just by examining the body? Cops can thank the folks at the University of Tennessee's Forensic Anthropology Center for helping them figure it out. "The body farm," as it's known, has "650 skeletons and growing" scattered over 2.5 acres in Knoxville, according to its website. Researchers and students study bodies in varying stages of decay to help anthropologists and law enforcement officials answer important questions, such as body identification and time of death analysis. (For a fascinating account of a visit to the center, see Mary Roach's book "Stiff.")

If you want to become one of those skeletons after you die, you're in luck, as they make donation pretty easy at the Body Farm. Get their Body Donation Packet, fill out their Body Donation Document and complete the biological questionnaire. They'll want a photo of you to help them learn more about "facial reconstruction and photographic superimposition as a means for identifying unknown individuals," according to the center's website.

If you live in Tennessee and within 200 miles of Knoxville, you're really in luck, because they'll take care of all the costs. If not, your family will be responsible for arranging transportation to the center.

Once they're done with you at the Body Farm, your family doesn't get your remains back, so if that's important to you, this isn't your best option.

Plastic crash test dummies are all well and good, but there's nothing like a real human body to simulate what happens in a car crash. You can will your body to the Wayne State University School of Medicine to become a crash test cadaver by filling out its Body Bequest Form. The form is for donation to the university, but "if a person specifically requests that their body be used in safety testing that is ongoing at the Bio-Mechanics lab, then we would honor that wish," according to an e-mail from Barbara Rosso-Norgan, the school's mortuary supervisor.

7. Give your body to a broker

We don't mean a stockbroker; we mean a body broker, who will take your parts and get them to scientists who will use them for research, training and education.

There are several groups in this business, including Science Care, Anatomy Gifts Registry and BioGift Anatomical.

Generally speaking, here's the upside of these groups: They pay to have your body transported to their facility, and with the parts that are not used in research, they pay for cremation and to have the ashes returned to your family (some will, if you prefer, distribute them at sea). This can save your family a lot of money.

The downside: You don't know where your parts will go. "We don't guarantee that we can use the body in any specific research program, and that's because our research is always changing," said Kristin Dorn, community relations manager at Science Care. "Your intent is to donate to science, not a specific research project."

Some brokers will allow you to say what areas you'd prefer your parts not go to. If this is important to you, find the broker who offers this option. "If someone is ready to donate their body to science, they will definitely need to do some research," Dorn said.

8. Send your body on tour

If you've been to the "Body Worlds" exhibit, you know what plastination is: a process of posing and hardening a body so it appears life-like.

You, too, could become one of these bodies on display by donating to the Institute for Plastination. If you live in the United States or Canada, your body will be embalmed on your own continent and then shipped to Germany, where technicians will perform the plastination process. They'll remove fat and water, "impregnate" your corpse with rubber silicone and position it into a frozen pose (you might be, say, running or sitting cross-legged or performing ballet or perhaps riding a horse). Your body is then hardened into that position with gas, light or heat. The entire process takes about a year, according to the group's website.

Your family pays to get your body to the embalming location, and the Institute for Plastination incurs the shipping costs to Germany.

There are rules about donation. You can be old, and you can be an organ donor, but if you died in a violent manner, it might not work out, as your body must be "largely intact" in order to donate, according to the institute's website.

Also, there's no guarantee your body will end up in one of the five exhibits. Some plastinated bodies are sent to medical schools and training programs, and you don't get to decide the destination of your corpse, according to Georgina Gomez, the institute's director of development.

If you're interested in going on tour and you live in North America, read the Guide to Donors and fill out the Donor Consent Form. There are also forms for European donors.

Researchers from around the world visit the extensive skeleton collection at the Maxwell Museum of Anthropology at the University of New Mexico.

Here's some information and the legal donor permission form and a donor information form.

The ground rules: Your family pays to get your body to the museum's facility in Albuquerque, and your remains (besides your bones, of course) get cremated and disposed of; they don't go back to your family. Researchers who want to work with the skeletons have to apply to the museum's Laboratory of Human Osteology; the skeletons are not put on display for anyone at the museum to see.

If you'd like to be put on display, see below.

Like Bazzel, you can donate parts of your body to the Mutter Museum at the College of Physicians of Philadelphia.

If you do so, you'll be a part of a pretty rarified group. Anna Dhody, the museum's curator since 2004, has received only three inquiries about donation after death, including Bazzel's.

"One woman contacted me and said, 'I have a 120-degree curvature of my spine. Would you like it when I'm done with it?' and I said, 'Yes, please,' " Dhody recalled.

Although the museum is particularly interested in bodies with abnormalities, it'll also consider taking your remains even if there's nothing particularly pathological about them. Either way, your family will have to foot the bill to get you to Philly. To learn more, send an e-mail to info@collegeofphysicians.org.

CNN's John Bonifield and Renea Lyon contributed to this report.