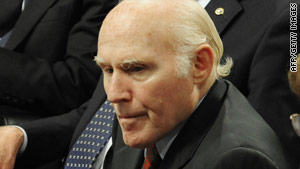 Sen. Herb Kohl and the Senate Special Committee on Aging, which he chairs, called for the investigation.
STORY HIGHLIGHTS
RELATED TOPICS

(CNN) -- Some court-appointed guardians for incapacitated seniors are not screened before they're appointed, and many are not monitored by the courts after they've taken over the affairs of their charges, resulting in hundreds of allegations of abuse, a federal probe found.

An investigation by the Government Accountability Office found allegations of abuse by legal guardians in 45 states and the District of Columbia, according to an advance copy of the report obtained by CNN. The report is scheduled to be released Wednesday.

In 20 cases studied by the office in which criminal or civil penalties resulted, investigators found that guardians stole at least $5.4 million in assets from 158 victims, the report said. In some instances, these same guardians abused or physically neglected the people they were supposed to help and protect.

In six of the 20 cases examined, the courts failed to screen guardians before giving them control over the financial affairs and care of their wards, the federal agency found. In one case in Missouri, a former taxi driver and convicted bank robber was appointed the legal guardian of a wealthy customer who had no family. As the elderly man developed Alzheimer's disease, his guardian stole more than $640,000 from him, writing checks out of the victim's estate to pay for exotic dancers and a new Hummer, court records show.

In Arizona, an 80-year-old woman's niece was appointed guardian of her wealth and well-being, despite having declared bankruptcy twice and being arrested numerous times for writing bad checks, according to court documents cited in the GAO probe. The elderly woman's attorney had objected to the appointment, saying the two were not close, but the court disregarded the protest. In the end, the niece misappropriated more than $150,000 from her aunt's estate, court records show.

A certified professional guardian failed to visit one of her wards for eight months, according to documents from a case in the state of Washington. The same guardian was then appointed to oversee another elderly person's estate, despite having $87,000 in tax liens filed against her.

Courts failed to oversee the conduct of appointed guardians in 12 of the 20 cases studied in the federal investigation, therefore allowing the abuse and financial exploitation to continue unobserved, sometimes for years, the federal report said.

It cited the case of a couple in Kansas who ran an unlicensed group home for mentally ill adults. The husband became the guardian of a 50-year-old female patient, allowing the couple to steal $250,000 from the woman, court documents show.

"In addition, they forced her and other residents to perform sexual acts for almost two decades as part of the fraudulent therapy treatment that they billed to Medicare, a federal court and jury found," according to the federal report.

The abuse was discovered when children on a school bus reported seeing naked people working on the farm, the GAO report said.

"At the husband's sentencing, the judge compared conditions at the house to those of a third world prison, and concluded at the wife's sentencing that '...but for the sighting by the children on the school bus, I am firmly convinced that [the group home] would be in business today,'" the report said.

Federal investigators also tested guardian certification required in a handful of states. To test to see whether this certification process would deter criminal-minded guardians from entering the system, investigators applied for the certification in Illinois, Nevada, New York and North Carolina. None of these states checked the undercover investigators' credit, nor did they validate their Social Security numbers to confirm their identities.

The GAO report was requested by the Senate Special Committee on Aging, chaired by Sen. Herb Kohl, D-Wisconsin. The committee says its next steps will be to consider federal legislation that will help state court systems improve their training of guardians, judges and legal personnel who handle adult guardianship cases.

The committee is also considering legislation that would help reduce fraud by unscrupulous guardians who receive the Social Security and veterans' benefits of incapacitated beneficiaries.