Swimming in warm water can take deadly toll on body 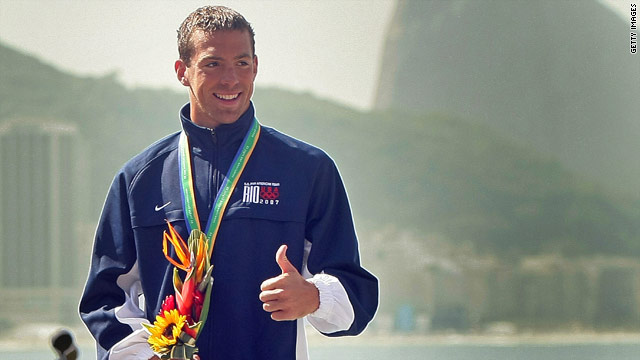 Merely sitting in a tub saps energy, said extreme swimmer Diana Nyad. "When you get out, you're feeling light-headed and very thirsty. ... Imagine now, you're going to crank your entire body, and swimming uses the entire body."

U.S. swimmer Fran Crippen died during a 10-kilometer marathon Saturday in the United Arab Emirates. Several of the athletes complained about the water temperature.

"Water in the 80s feels like a Jacuzzi," agreed Steven Munatones, who helped write safety rules for FINA, the international governing body for the sport of open-water swimming. He also noted that there was no cloud cover during the UAE competition, "which makes it even more uncomfortable."

Crippen's cause of death remains unclear. Officials with sporting organizations have suggested severe fatigue and heart attack. The official report released by the UAE Swimming Federation did not mention a heart attack.

In a conversation with his coach 12 hours before the race, Crippen said that the air temperature was 100 degrees and the water was 87 degrees.

"If the water temperature was 87 degrees, that's so warm," said Ken Kamler, a doctor and author who explores survival in extreme circumstances. The body dissipates heat through the skin during swims, he said. When that water is warm, "it's hard for your body to get rid of the heat," he said.

That could lead to "spasms, muscles not firing properly," which could have fatal effects, he said.

A person could get heart arrhythmia because the organ can't pump efficiently. The second possibility is lung failure as the muscles are unable to function properly. This could lead to swallowing water and drowning, Kamler said.

"I think every athlete was struggling a lot," said Jan Wolfgarten, a member of the German national team who competed in the race with Crippen. He, too, estimated that the water temperature was near 90 degrees.

Swimmer: Fatal race may not have been monitored closely enough

Swimming in warm water can trigger nausea, vomiting and light-headedness, said Nyad, who recalled swimming for eight hours in 89-degree water in August.

"I was nauseous," Nyad said. "I thought I was suffering jet lag. I realized maybe an hour and half in, I was really feeling sick. I had no strength. By the fourth or fifth hour, my arms were slapping and flopping over, and I felt headachy, nausea, dehydration."

"Even the fittest heart can suffer when working near 100 percent effort in extreme heat," she wrote in a blog post.

Much of a swimmer's reaction to the water will depend on his or her body fat and the environment the swimmer is accustomed to during training.

Crippen, 26, trained in pools in the U.S. including in Southern California, said Munatones, an experienced open-water swimmer who oversees the FINA world championship competitions in the United States and Canada.

"California is not going to compare to very warm water that Fran was swimming in," he said.

FINA is still waiting to find the exact temperature of the water in the UAE contest.

Although it remains unclear what happened to Crippen, it's difficult to identify warning signs that a swimmer is in trouble in open-water races, when athletes are frequently submerged.

"Most of the time, when you have a performance athlete who dies suddenly, it's some kind of cardiac arrhythmia," said Dr. Michael Broder, Nyad's team physician. "With swimmers, they can't call out. It's not at all obvious when they're having trouble."

In endurance competitions, swimmers sweat profusely and risk dehydration, placing greater strain on the body and heart as it attempts to pump oxygen into the tissues.

Another risk is an imbalance of electrolytes, the minerals that contain electric charges to help maintain blood chemistry, muscle action and other processes.

"When you get dehydrated and imbalanced, that can contribute to cardiac abnormalities, neurological problems, fuzzy thinking," Broder said.

FINA guidelines specify only that a water temperature of 61 degrees or lower is too low to compete. It doesn't address temperatures that are too high, leaving that decision up to individual event organizers.

"I've said for years we should have sponsored research on the effect of temperature on the open-water swimmer, but we're not a popular sport, so that hasn't happened," Munatones said.

Nyad disagreed with critics who said the race should've been canceled because of water temperatures.

Competing in difficult environments is part of the challenge, Nyad said.

"Do you cancel the New York Marathon because it's a hot day?" she said. "No. They warn everybody that you're going to have to watch it, drink much more frequently. They don't cancel the whole race."

Athletes adjust to conditions by pulling their pace back, hydrating more frequently, she said.

Crippen is the only swimmer to die during an open-water event on the pro circuit, Munatones said.

"Fran was a very good friend of mine. I've seen him grow in this sport," he said. "I think he would say, 'Don't end this sport. Improve it.' "