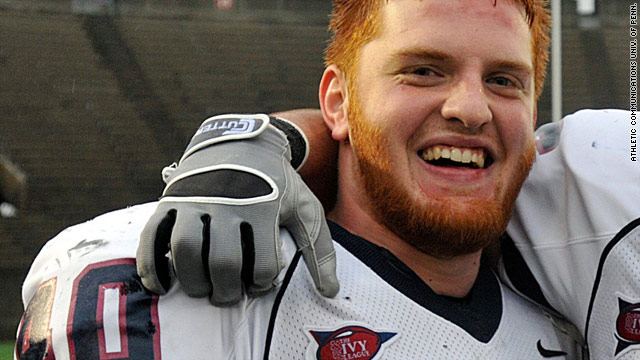 Owen Thomas, a junior at the University of Pennsylvania, had symptoms of chronic traumatic encephalopathy.
STORY HIGHLIGHTS
RELATED TOPICS

(CNN) -- An autopsy of a 21-year-old college football player who committed suicide has revealed mild stages of a type of brain damage typically seen in retired or aging athletes and can cause neurobehavioral disorders and bizarre behavior.

Teammates had described Owen Thomas as an affable college junior who had been overwhelmingly voted to be one of the captains by the University of Pennsylvania football team, and his coach had called him "the most popular kid on our team." Thomas also was named to the Second-Team All-Ivy in 2009.

His suicide in April stunned his friends and family.

Researchers from Boston University requested an autopsy of his brain. This week, they said that Thomas had chronic traumatic encephalopathy, making him the first active college football player known to have had the debilitating condition.

CTE is also called dementia pugilistica, because career boxers who've suffered repeated blows to the head and concussions have been known to develop the syndrome.

Its effects are mainly neurobehavioral, including poor decision-making, impaired memory, erratic behavior, use of drugs and alcohol, depression and suicide.

"We know that CTE can bring on things like depression and erratic behavior and problems with impulse control," Dr. Robert Stern, co-director of the Center for the Study of Traumatic Encephalopathy at the Boston University School of Medicine, said on CNN's "American Morning."

"And there have been several cases of suicide in the past amongst people who were found to have CTE. But in any individual case, we can't say for sure that there's a link," he said.

Grimsley died of an accidental gunshot wound to the chest. Webster, Long and Strzelczyk all died after long bouts of depression, while Waters committed suicide in 2006 at age 44. McHale was found dead last year of an apparent drug overdose. Henry died at the age of 26 after falling from a moving truck during a fight with his girlfriend.

While CTE has been seen in older players who've suffered concussions and repeated head injuries, Thomas had never been diagnosed with a concussion as far back to the age of 9, according to his medical records and family.

Thomas was a lineman, a position that endures as many as 1,000 hits to the head per season.

Recently, neurologists have suggested that such blows to the head could be deceptively severe, even if the player does not feel any pain or show any symptoms. The accumulation of such strikes to the head could cause long-lasting damage.

"It shows us that you don't need to have had known or reported concussions to develop this brain disease," Stern said. "It really shows us that those multiple, repetitive sub-concussive blows to the head that are experienced by so many athletes in many different sports can bring on the beginnings of this disease." 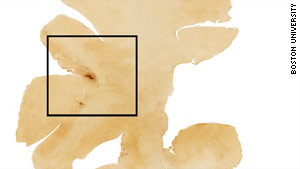 The syndrome is believed to be caused by large accumulations of tau proteins in the brain that kill cells in the regions responsible for mood, emotion and executive functioning. Tau proteins are also found in the brains of patients with Alzheimer's disease and dementia. Thomas' brain had evidence of the tau protein.

"CTE, which is a progressive brain disease that eventually would lead to dementia, can start at a very young age," Stern said. "You don't need to have played pro football for years to start developing this disease. Owen was 21 years old, and we saw definitive disease, mild but very definitive."

Thomas apparently hanged himself in his off-campus apartment, according to CNN affiliate Philly.com. 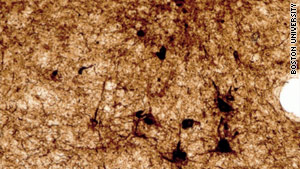 Microscopic images show large numbers of tau (dark brown spots) in the areas of damage. In healthy brain tissue, there would be no such protein tangles.

"While we will never know the cause of Owen Thomas's depression and subsequent suicide, we are aware of and deeply concerned about the medical issues now being raised about football head injuries and will continue to work with the Ivy League and the medical community in addressing these issues," the University of Pennsylvania said in a statement.

"Owen's untimely death was a terrible tragedy, and we continue to grieve for his loss."

CTE remains a baffling condition because there is no test for it while a person is alive. Detecting the syndrome requires brain samples, which cannot be given until a person is dead.

"It definitely can go undetected," Stern said. "We don't know how long it goes, how long it develops before we can start seeing symptoms."

Thomas' case highlights that football should be made safer, Stern said, and the suggestions include reducing the number of hits to the head and using different types of helmets.

"We need to make sure that parents, the kids themselves, the trainers and the coaches really understand that repeating blows to the head over time can have dramatic problems later in life," Stern said.

The NFL has said it will step up efforts in preventing and researching the dangers of head injuries, after the league has been accused of minimizing medical evidence.

"Up to this point, this concern about head concussions was not on my radar," Thomas' mother, the Rev. Kathy Brearley, of Allentown, Pennsylvania, said to Philly.com. "That Owen had the onset of this disease at the age of 21 should be a concern to everyone."

Thomas will be honored in a ceremony Saturday before the University of Pennsylvania's opening game.