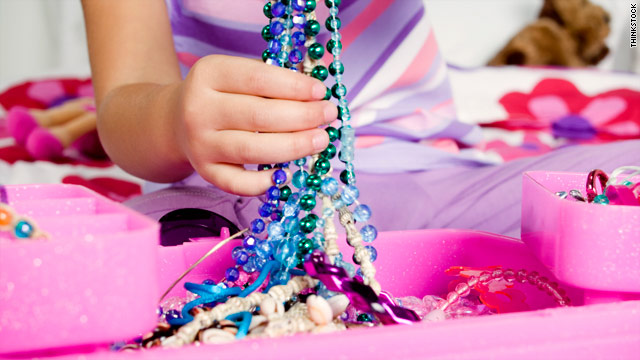 According to Consumer Reports magazine, there are "worrisome levels" of potentially hazardous metals in some children's prodcuts currently on store shelves.
STORY HIGHLIGHTS
RELATED TOPICS

Cadmium and lead levels are the focus of the magazine's report, which is based on tests of more than 30 products using an initial screening method called X-ray fluorescence and outside laboratory analyses.

While lead has drawn attention from product safety advocates for years, cadmium -- a metal commonly found in paint and batteries -- has become a larger concern recently. And the magazine argues that the U.S. Consumer Product Safety Commission needs to develop regulations to limit its use.

"We're concerned it's going to start showing up a lot in other products, such as children's jewelry, or hair barrettes or other products," said Don Mays, Consumer Reports' senior director of product safety and technical policy. "The problem here is that young children in particular have a tendency to put jewelry in their mouth, a necklace, a little pendant, they have a tendency to suck on it."

The magazine says lead levels in a green clover-shaped cell phone charm sold at the retailer Claire's "caused the greatest concern." The charms tested by the magazine contained 100,000 parts per million of total lead -- a quantity that would be illegal if it were considered a children's product.

"Although the charm is not marketed specifically to children 12 and under, it could appeal to that age group or it could be accessible to them if a parent or older child has one," the magazine's analysis says.

Messages left by CNN Tuesday at the Florida and Illinois offices of Claire's were not immediately returned. However, in May, Claire's issued a voluntary recall of a charm bracelet following reports of high levels of cadmium, according to statements posted on its website. The bracelet had been removed from Claire's stores in January.

"Within weeks of these reports, Claire's Stores added procedures requiring all of its suppliers to test for cadmium in children's jewelry," the company said. Testing requirements were already in place for lead and nickel content, according to the statement.

Claire's noted there are no U.S. standards addressing the presence of cadmium in children's jewelry, and said it encouraged the development of such standards.

Consumer Reports says samples of a Revlon Couture Hair Accessory Barrette tested positive for high levels of total cadmium, though potential for significant cadmium exposure through normal use is low.

Even so, Mays says, children could put the barrettes in their mouths.

"The barrette is not marketed to children, but it could interest and be accessible to them," the magazine claims.

Representatives from Revlon did not immediately return calls from CNN seeking comment.

Even when companies change their products to comply with lead limits, older versions the company has replaced might remain on store shelves, the magazine says, suggesting that may have happened with a Kidorable bumblebee raincoat marketed to toddlers and preschoolers.

The company told "Consumer Reports" that it reformulated the coat in 2008 to comply with a new consumer product safety law and began labeling its raincoats and backpacks as lead-free in January 2009. And versions of the coat purchased by the magazine's testers in January and May 2010 contained trace levels of lead well below federal limits.

But the magazine's testers were still able to purchase older versions of the coat in December 2009 and found lead levels that were higher than the legal limit.

The magazine says consumers should look for the newer products and "take a pass on non-labeled hand-me-downs or coats from yard sales."