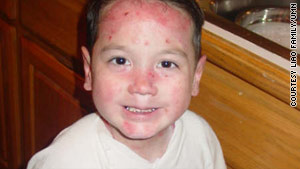 Jake Liao had to be bandaged every day to prevent skin wounds and infections.
STORY HIGHLIGHTS

(CNN) -- For years, Theresa Liao heard there were no cures, no treatments, no hope to help her son Jake.

"When he was born, his hands looked like they had been boiled in oil," said his mother. "It looked like someone had taken a potato peeler and skinned him down to muscle."

At the slightest friction, Jake's skin would shed, leaving the newborn wailing in pain. When Jake rubbed his eye, a chunk of his eyelid would come off in his fingers. He was born with recessive dystrophic epidermolysis bullosa, a terminal genetic condition in which persistent skin problems lead to crippling deformities and, eventually, skin cancer.

"I'm not saying this is a cure," said co-author Dr. Jakub Tolar, an associate professor of pediatrics at the University of Minnesota. "This is a critical step on the road to make this a disease of the past."

EB patients lack a protein called collagen 7 that acts as a Velcro, hooking the layers of skin -- the epidermis and the dermis -- together.

The transplanted bone marrow contains stem cells that can turn into skin cells. These new skin cells could produce the missing collagen 7 to stitch the skin layers, gradually healing the blisters and improving the patient's condition.

The transplant appears to be effective, but doctors don't know exactly what type of stem cells are responsible for the change.

EB patients have often been called butterfly children, because their skin is so sensitive. They have also been likened to permanent second-degree burn victims.

She held him up in front of me and said, 'Please, save my child.'
--Dr. John Wagner

The graze of a diaper can sheer off skin from their waist and inner thigh. Putting T-shirts over their heads can cut skin off their ears. In severe cases, children live in the bondage of bandages, like little mummies, to protect their fragile skin from wounds and infections.

The constant inflammation and blisters can fuse fingers and toes, creating a webbed look. EB also irritates the lining of the esophagus, so that many children with the condition get stomach feeding tubes.

The Netherlands allows for euthanasia for patients of this rare condition. The ones who survive to their 20s usually succumb to skin cancer.

EB patients require daily bandage changes to protect their skin in an intensive process that takes about four hours. Liao likened it to "controlled torture."

For years, Liao, of Princeton, New Jersey, scoured the Web, and called companies, dermatologists, hematologists and nurses until one doctor mentioned that perhaps a stem cell treatment could reboot Jake's entire body to help him produce the missing collagen.

Liao pounced after learning that Dr. John Wagner, director of pediatric blood and marrow transplantation and clinical director of the Stem Cell Institute at the University of Minnesota, would be in New York for a meeting in 2004. He had a long track record of working on stem cell and cord blood issues.

Liao approached Wagner with her then-2-year-old Jake in her arms. Jake had thrown up parts of his esophagus a few days before, and was still moaning in pain.

"She held him up in front of me and said, 'Please, save my child,' " Wagner recalled.

The pediatrician was horrified.

I was both horrified and feeling horrible that I can just walk away from this and say, 'I'm sorry. I take care of leukemia patients. I don't want to choose this one.'
--Dr. John Wagner

He told Liao that he couldn't just start a stem cell treatment -- there had to be animal models, money for research (orphan diseases like EB are notoriously hard to fund), approval from regulatory bodies, and he needed to have a track record of treating the disorder. There were many complicated, time-consuming steps and millions of reasons to listen politely and walk away.

"Little by little, he tried to avoid me. I kept e-mailing him and calling him," Liao said.

"What affected me more was this mother pleading with me, saying 'You can't say no. Everyone else says no. Everyone else says it's incurable.' " Wagner said. "I was both horrified and feeling horrible that I can just walk away from this and say, 'I'm sorry. I take care of leukemia patients. I don't want to choose this one.' "

"My research is developing stem cell-based therapies for kids who are destined to die. So I deal with many sad cases, but this one is over the top," he said.

Though they had no experience in skin diseases, Wagner and Tolar, the study co-author, started examining stem cell possibilities for EB.

They implanted several different types of stem cells into mice. After trial and errors, they eventually found that bone marrow transplants somehow helped heal wounds and regenerated skin in mice.

In 2007, they started the first human clinical trial with seven EB patients. 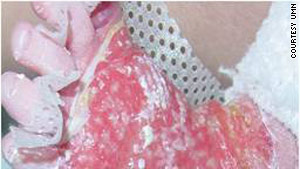 Nate's foot before the transplant. 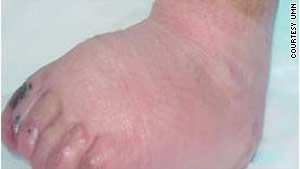 Nate's foot about 71 days after the transplant.

The transplants were risky because they require chemotherapy to wipe out the recipient's immune system to prevent rejection of the bone marrow.

Liao knew the risks but said she felt Jake and a younger brother were "going to die, relatively painfully and have a difficult existence" until passing away from malnutrition or cancer with the disease.

"Before anyone judges me or my family, I'm not going to ask them to walk a mile in my shoes, I would say take about three steps," Liao said. "Somebody had to go first. Somebody had to make a difference."

By that time, Jake was 5 years old and had a 16-month-old brother, Nate, who also had EB.

In November 2008, Nate went first in the trial, receiving a bone marrow transplant from a perfect match -- his older brother, Julian.

When doctors examined Nate months after the surgery, the contrast was striking. Nate was also producing more collagen 7.

"The differences in the way the skin healed, he was very different," Wagner said. "He gave us hope."

Seven months later, Jake was patient No. 3 in the trial, receiving a bone marrow transplant from a cord blood match.

But Jake struggled. Stricken with complications of the transplant and an infection, he died 183 days after the procedure.

The differences in the way the skin healed, he [Nate] was very different. He gave us hope.
--Dr. John Wagner
RELATED TOPICS

Out of seven children in the trial, two died. The other child had died in the clinical trial before the transplant. The transplant has inherent risks, the authors said.

"This is bone marrow transplantation, it's not a trivial procedure," said Dr. Jouni Uitto, professor and chairman of dermatology and cutaneous biology at Thomas Jefferson University, who was not part of the study. "It's a major procedure that has a high risk component."

The five participants who survived have all improved. One boy bought a trampoline and can enjoy activities he never imagined before the transplant.

"It's an exciting study in the sense it raises cautious optimism that bone marrow transplantation may be a way of treating the condition," Uitto said.

More research is under way to better minimize risks. Since the study was published, six more children with EB have received transplants, and all have shown improvements, doctors said.

Hundreds of EB patients have come to Minnesota hoping to take part.

It's bittersweet for Liao, as she closely monitors Nate's health, but also grieves for Jake.