Shaping up a city in the nation's fattest state 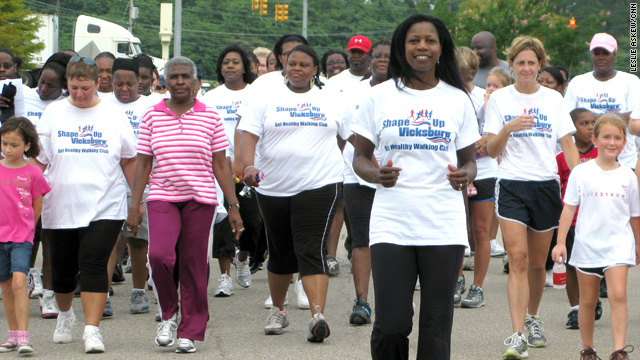 "Cancer killed her, but obesity restricted her life," said Washington's sister, Linda Fondren. "Her last words to me were, 'Linda, I wish I had lived my life more for myself.' "

Washington had been a single mother, working multiple jobs in the food service industry to make ends meet.

"She did not know that she could do both," Fondren said. "You can be of service to people ... but you must take care of yourself first."

It's not an uncommon story in Mississippi. Its nickname is the "Hospitality State," but for the last six years it has been the fattest state in the nation, according to a 2009 report by the Trust for America's Health and the Robert Wood Johnson Foundation.

This week, the Centers for Disease Control and Prevention reported that 34.4 percent of Mississippi's adults are obese, meaning they have a body mass index of 30 or more.

Fondren, 54, wants to move her state from the fattest to the fittest. For the last four years, she has led her hometown of Vicksburg in its battle with the bulge.

Being the fattest state "is not a good heavyweight title to hold," she said. "I felt that people needed to be challenged."

Fondren remembered how her sister had been too embarrassed to exercise in a gym with men. So in June 2006, she opened an all-female workout facility, Shape Up Sisters.

The gym was a success -- it now has more than 600 members -- but Fondren eventually realized that she needed to expand her reach if she wanted to slim down her community.

She says part of the problem in Vicksburg is that being overweight is so commonplace it is often considered the norm.

"Most people ... they do not know that they have a weight problem because we live in an environment where everyone almost looks the same," she said.

So in October 2009, Fondren kicked off Shape Up Vicksburg. The initiative challenged residents to lose weight while giving them the tools they needed to reach their goal.

Fondren held free fitness and nutrition classes across the city and convinced many of the city's restaurants to add healthy items to their menus. Participants could track their weight loss online or at weigh-in stations at Wal-Mart and the local medical center.

"People want to do good, but they need help," Fondren said.

Approximately 2,500 people joined Fondren's movement, and over 17 weeks they shed, on average, more than 5 pounds each. To date, residents have lost nearly 15,000 pounds.

Many attribute the success to Fondren's relentless determination.

Today, Shape Up Vicksburg includes a walking club, which draws up to 200 people, and a weekly nutrition class. Fondren's gym is also open to all women every Saturday, and she frequently teaches fitness classes at area schools and churches.

All of these activities are free, something she believes is a critical factor.

"It's the poor African-American and white communities that are the most obese, and those are the ones that are most unreachable," Fondren said.

As a successful real estate developer, Fondren largely funds the effort herself, but the initiative also receives donations from local businesses.

"I felt as though if I didn't lose weight I was going to die," she said.

But fear drove her to take action. Since joining Shape Up Vicksburg six months ago, Fisher has lost 50 pounds.

It's those stories that keep Fondren motivated. She's determined to expand her effort statewide to find more converts to her cause.

"This is a life-or-death issue," she said. "Obesity affects us all ... and the only way that we're going to combat it is: Stand together."

Want to get involved? Check out the Shape Up Vicksburg website at www.shapeupvicksburg.com and see how to help.