Want to keep your child drug-free? Here are five signs of possible trouble 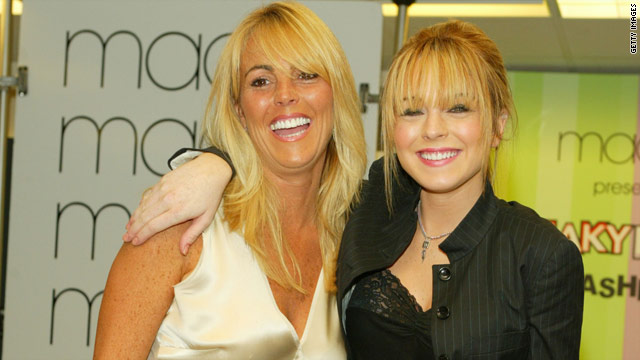 (CNN) -- "I see a scared, scared woman," said Lindsay Lohan's father, Michael, in an interview with CNN's Larry King, referring to how he felt watching the troubled movie star being handcuffed and taken away to jail on Tuesday.

Lohan, who on July 6 was sentenced to serve 90 days in jail for missing alcohol counseling sessions in violation of her probation, will also be required to sign up for an additional 90 days in a drug and alcohol rehabilitation program within 24 hours of completing her jail term. The attorney for Michael Lohan says the father had been publicly reaching out to Lindsay for months, trying to get her to go to rehab, but they couldn't get her to listen.

Lohan's acting career took off when she played the part of identical twins in the 1998 Disney remake of the "The Parent Trap." She has been in more than a dozen movies since then. However, Lohan's life took a turn for the worse in 2007.

She was arrested twice, once on charges of driving under the influence, and again for cocaine possession. In a news release at the time, Lohan said it was clear that her life had become "completely unmanageable" because, "I am addicted to alcohol and drugs."

How does one go from the cute little girl in "The Parent Trap" to being trapped in a cycle of drug and alcohol abuse?

The parents of children who have been through it say the warning signs can sometimes be unclear.

"I don't think most parents go running down the path that you have an emerging addict on your hands anytime they try something," says Jan Ligon, a member of the National Association of Social Workers. He became a specialist in crisis services to relay lessons he learned taking care of his own son, Jon, who suffered with alcohol and drug addiction.

Even though Ligon knew Jon had tried marijuana and alcohol with friends, he thought it was simple experimentations. But when his son began to lose inexplicable amounts of weight and his grades began to tumble, Ligon started snooping around his bedroom.

"I found scales from his school science lab, indicating that he was weighing something," he recalls. "I said, 'OK, this is not a good thing.' "

It can be a real challenge separating youthful curiosity from a potential drug or alcohol problem, and experts warn against overreacting to every little detail.

Sean Clarkin, executive vice president of the Partnership for a Drug-Free America, recommends sitting down and having a conversation with your child as an initial step.

"Say, 'Look, I'm concerned about you, and I want to know what's going on,' " he suggests. The likelihood is that they will respond with "nothing," but Clarkin says at least this opens the door of communication.

"You don't know what to look for, unless you know to look for something," says Dr. John Dombrowski, a member of the American Society of Anesthesiologists. The ASA recently issued tips and guidelines to help parents recognize the signs of robo-tripping, the abuse of over-the counter medications.

Experts shared five signs that parents can look for that might indicate a problem:

1. Your child has a sudden change in appearance, friends and activities.

"Teenagers try on different identities all the time," notes Clarkin. He says to be on the lookout for patterns of change and not to freak out over one specific behavior.

For example, if your child suddenly decides to dress in grunge instead of his typical polo shirt, that is not an infallible sign of a problem.

"But if over several months you see them hanging out with a bunch of different friends, getting really contentious AND dressing differently -- the totality should say to the parent that something is wrong," he explains.

2. You are unfamiliar with the language your child speaks (texts).

Do you recognize these terms: Dex, skittling, tussing, robo-tripping and triple Cs?

If your answer to either question is no, maybe it's time to take a crash course in teenage lingo. Experts say familiarizing yourself with your child's vocabulary can help you be more proactive in communicating and getting involved at the front-end of a problem.

The Partnership for a Drug-Free America offers this Drug Guide by Slang, and the Office of National Drug Control Policy offers this list of street terms to help you recognize the names used to identify popular medications and controlled substances.

"Parents. The Anti-Drug" is the name of a group that offers this list of terms to help you decode internet lingo. The attorney general in Idaho has compiled this Parents' Guide to help adults decipher the various terms used in chat rooms, text messages and on blogs.

3. Bottles disappear from the medicine cabinet faster than they should.

The Substance Abuse and Mental Health Services Administration estimates that 3.1 million people ages 12 to 25 have used nonprescription cough and cold medicines to get high at least once, and that medications containing dextromethorphan (DXM), an ingredient found in many cough syrups, accounted for more than 12,000 emergency department visits in 2004.

Dombrowski, who specializes in pain medicine in Washington, D.C., has treated numerous young patients in intensive care for "robo-tripping," the term many use to describe taking too much DXM. He says parents often don't consider the cough and cold medications to be a problem.

"The tendency is to think it must be safe because these drugs are common around the house and don't require a prescription," he said. "It gives you a false sense of security."

Many parents are familiar with Robitussin because of robo-tripping. But the National Institutes of Health has this list of other products containing DXM. This interactive points out the potential danger zones in your home and community where young people often gain access to over-the-counter medications. Experts also suggest the website DXMstories, where adults who have abused DXM in their teenage years warn young people never to try it.

4. Another family member has an addiction problem.

If you or someone you know has a drug or alcohol problem, SAMHSA offers a state-by-state list of substance abuse treatment facilities. The Alcohol Policy Information System offers this map where you can find out the laws for underage drinking in your state.

Experts say it is also important to consider the influence one sibling can have on another. In his interview with Larry King, Lohan's father expressed concerns about his other daughter.

"What really hurt this time wasn't Lindsay and the sentence coming down on her, but my daughter, Ali, was a mess, and it just broke my heart to see Ali go through it," he said.

Laurie Kramer, a professor of applied family studies and the founding director of the Family Resiliency Center at the University of Illinois, researches sibling and peer relationships and says not to underestimate how brothers and sisters act as "agents of socialization" in both encouraging and preventing risky behaviors.

"Parents are going to be more direct and intentional in what they want children to do, learn and experience," Kramer said. For example, they are more likely to say, "Here's what you do, and here's what you don't do." She says it's never going to be that straightforward with a sibling.

She says even when you don't realize it, siblings are vigilantly watching and learning based on what the other is doing, and they use this information to form judgments. They may decide not to follow in the path of a sibling who is behaving inappropriately, but the proximity means the risk is there.

"If the situation has gotten serious, it's not out of the question to separate the children or set some limits on how and when they can interact," she advises.

5. Your gut says something is wrong.

Ligon says he and his wife had a feeling something was happening with their son, but because they never saw him drinking or doing drugs, they thought the fears were unwarranted. They didn't want to lose his trust.

"You really struggle as a parent because you want to be nosy, but not too nosy," says Ligon. "Kids are magnificent at hiding things, and the moment they sense something is going on, they get even better at it," he says.

If you need help talking to your child about addiction, the Partnership for a Drug-Free America has this free intervention eBook; refer to page 5 for tips on how to have the tough conversation.

Clarkin says parents often think "my kid wouldn't do that," or they worry that approaching a child too soon without direct proof would do more harm than good.

He says drug use that starts off as something experimental can quickly become a problem of dependence, so it is important to get involved as soon as possible.

"It's better your child is a little upset that you approach them and everything turns out to be fine, than to ignore your instinct and be terribly wrong," he says.

Despite years of treatment, Ligon's son continued his addiction, and at 35, he died after taking an IV containing heroin and cocaine.

"Knowing what we know now, we would have sought professional help the moment we knew Jon smoked a joint at age 11," he says.

He advises parents to get it checked out and that scheduling the precautionary appointment is no different than going to the doctor for that spot on your arm or that headache that won't go away.

"I would have done that sooner, even if it didn't matter in the end."