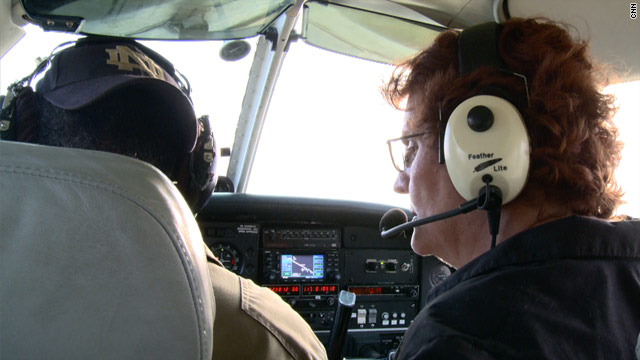 "I would pick up patients and drop them off ... and they would call a cab, and that was how it was done," said Broussard, who was part of a group of volunteer pilots who flew in patients from all over Texas.

In 1999, one of her frequent-flyer patients, Eva, called Broussard and said she wouldn't be coming in.

Houston, Texas, is home to many medical centers, including MD Anderson Cancer Center, one of the world's premier cancer treatment facilities. But cab fare from Houston's main airports to the treatment centers can range from $50 to more than $100 each way.

For patients struggling financially, that expense alone can keep them from getting the treatments they need to stay alive.

"People lose everything. They lose their cars; they lose their homes. They're living with relatives. They wouldn't have cab fare. A lot of people would just stay home and die," said Broussard, 60. "And that's just not acceptable."

So Broussard started a group she called Houston Ground Angels, organizing volunteers to drive patients to and from Houston's airports and treatment centers for free. Today, driving her red pickup along Texas highways, Broussard credits Eva -- who passed away in 2001 from colon cancer -- as the inspiration for the program.

"I said, 'Eva, I'll drive you down.' I put her in my truck and went downtown. And then, all of the sudden, it just popped in my head, 'I wonder if [other people in] Houston would be interested in this?' "

Broussard placed an ad in the Houston Chronicle calling for volunteer drivers, and the response was overwhelming. About 300 people called to sign up.

At the time, Broussard was a single mother of five working full-time at an oil refinery. She spent her spare time coordinating the drivers, or "ground angels." When pilots alerted Broussard that they were flying in a patient, she would arrange for a ground angel to meet them.

"I was on the phone all the time. I carried a spiral notebook with all the volunteers' names and numbers in it," Broussard said.

Ultimately, the pilots liked the program so much that they asked to join, and the organization became the Houston Ground Angels and Pilots.

Today, the group includes nearly 50 pilots and 300 drivers. Patients contact the organization to request ground transportation from a Houston airport or a flight from their regional airport. Requests are posted on the group's website, and volunteers sign up for each "mission."

Missions take place seven days a week. Rides are provided to patients who arrive into the Houston area on a commercial flight or who've been flown in to a regional airport by one of the program's pilots. The group also helps fly in patients from the Gulf Coast, Oklahoma and Arkansas by working with other volunteer flying organizations whose pilots cover part of the distance.

Since 2001, the group has completed about 6,000 missions -- most of them rides, along with hundreds of flights. Broussard says many volunteers are drawn to the group because they have lost loved ones to cancer.

Cathy Laflen, 62, has been relying on the group for eight years. After she was diagnosed with brain cancer in 2001, the cost of treatment crippled her financially. Unable to work, she lost her home and her car.

Laflen, who lives about 4½ hours from Houston by car, was referred to MD Anderson Cancer Center but lacked the funds or transportation to get there. With the help of Broussard's team, Laflen has been able to fly into Houston and get treated. She credits the volunteers with giving her hope.

"They've saved my life," Laflen said. "Anytime that I need to come up here, they do it. The ground angels have everything set up. I don't have to worry. I would have died a long time ago, because they have nothing like this down where I live."

Patients receiving transportation from Broussard's group must submit proof of their medical need. Those requesting flights also must have a letter from their doctor saying that they need air transport and that they are well enough for it.

Recently retired, Broussard is now a full-time volunteer. She and her team aim to make sure that patients coming into town for treatment travel without stress.

"There's no worry, because there is going to be somebody that's going to fly them," she said. "There will be somebody that will pick them up. They're not thrown to the wolves in the big Houston metropolis, of being afraid of where to go."

Broussard -- who has also opened her house to patients who can't afford a place to stay -- said the program hits home the most when she sees patients thriving despite being told they had a limited life expectancy.

"They tell us all the time that they get their strength through us," she said. "If they only knew it's the other way around."

Want to get involved? Check out the Houston Ground Angels and Pilots website at http://www.houstongroundangels.org/ and see how to help. You can nominate a 2010 CNN Hero at cnnheroes.com.