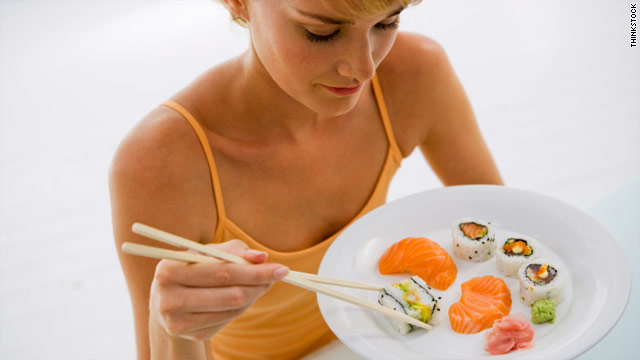 (Health.com) -- Millions of Americans already take fish oil to keep their hearts healthy and to treat ailments ranging from arthritis to depression. Now, a new study suggests that the supplements may also help women lower their risk of breast cancer.

Postmenopausal women between the ages of 50 and 76 who took fish oil were 32 percent less likely to develop certain types of breast cancer than women who didn't, the study found.

The researchers looked at 14 other popular supplements (including gingko biloba, black cohosh, soy, and St. John's wort), but only fish oil -- which contains concentrated amounts of the omega-3 fatty acids found in salmon, tuna, and other fish -- had any connection to breast cancer risk.

Despite their findings, the researchers say it's too soon to recommend that women start taking fish oil to stave off breast cancer.

"People should try to achieve nutrients through a healthy diet, so eating fish is a better recommendation than fish oil," says the lead author of the study, Dr. Emily White, Ph.D, an epidemiologist at the Fred Hutchinson Cancer Research Center, in Seattle, Washington. "We think that fish oil is promising in terms of disease prevention, but it's not proven."

White and her colleagues measured fish oil consumption using surveys, and they simply compared the rates of breast cancer diagnosis among women who took the supplements and women who did not. Though their analysis took a number of other factors into account (such as age, family history of breast cancer, and whether the women were on hormone therapy), unknown factors could have affected the results.

"We tried to equalize the two groups in terms of other health behaviors, but only a randomized trial would offer more definitive information," White says, referring to a study in which women would be randomly assigned to receive fish oil or a placebo.

In the past, a number of studies similar to White's that have found an apparent link between supplements and reduced cancer risk haven't been confirmed by more rigorous studies, says Dr. Jay Brooks, M.D., an oncologist at Ochsner Health System, in Baton Rouge, Louisiana.

"This is an interesting study, but we've done a lot of [these] studies that have turned out not to be helpful in terms of prostate cancer prevention," Brooks says.

Health.com: How to reduce your breast cancer risk at any age

Still, it's plausible that fish oil could lower breast cancer risk. The unsaturated fatty acids in the oil are believed to tamp down inflammation, which plays a role in some cancers as well as heart disease. Fish oil supplements, which have been shown to lower blood pressure and triglycerides (a type of blood fat), are most commonly taken to improve heart health.

The new findings "reinforce something that most of us feel in our hearts but are struggling to prove," says Dr. David Pearlstone, M.D., chief of the division of breast surgery at Hackensack University Medical Center, in New Jersey. "Fish oil probably is really good for you in a lot of ways, but the data has been [slow] in coming."

The study, which appears in the journal Cancer Epidemiology, Biomarkers & Prevention, included about 35,000 women without breast cancer living in Washington state. Between 2000 and 2002, the women filled out questionnaires about their past and present supplement use, medical history, and lifestyle.

Health.com: Supplements for cholesterol: What works?

Over the next six years, 880 of the study participants (or about 2.5 percent) got breast cancer. The women who were taking fish oil when the study began had a reduced risk of invasive ductal carcinoma, the most common form of breast cancer. Fish oil did not seem to affect the risk of lobular cancer.

Americans spent $739 million on fish oil supplements in 2008, according to the Nutrition Business Journal. Although more research is needed before doctors begin recommending fish oil to women, using already-popular supplements to reduce breast cancer risk holds a lot of appeal.

"It would be an easy intervention," says Pearlstone.