How to tell your child you might be dying 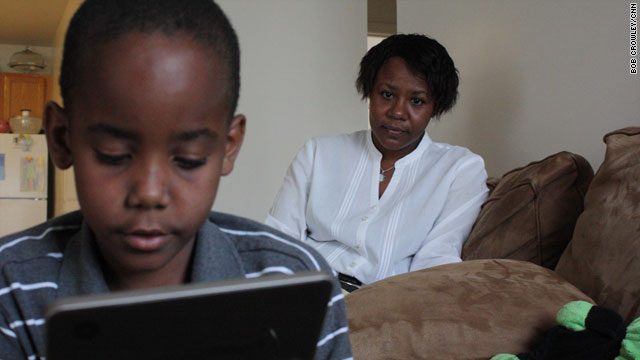 When Jacqueline Shaw got cancer three years ago, she elected not to tell her son, Aaron, who was 4 at the time.
STORY HIGHLIGHTS

(CNN) -- When Jacqueline Shaw picked up her son, Aaron, from day care, he came running at her full-force, as always, with all the energy you'd expect from a loving 4-year-old thrilled to see his mother at the end of the day.

But as Aaron lunged at his mother for a hug, instead of returning his love as usual, Shaw's body froze. She steeled herself and tried desperately not to cry out in pain.

"He jumped into my arms, and I had to hold back the tears," says Shaw, 46, who lives in Quincy, Massachusetts.

The pain was because the day before, Shaw had undergone surgery to remove a cancerous lump from her breast. The wound was fresh and the muscles and tissue still sore. She held back the tears because she didn't want Aaron to know she had cancer.

What to tell children when their mother or father has cancer -- or whether to tell them anything at all -- is a difficult decision faced by many. According to a study published this week in the journal Cancer, more than 1.5 million cancer survivors have minor children, and more than 2.5 million children have parents who've had cancer.

Many more parents have other debilitating and even deadly illnesses and also have to figure out what to tell their children.

"You have to be prepared to meet the child where he or she is to give the information," says Rosalind Kalb, a clinical psychologist who works for the National Multiple Sclerosis Society. "One of the things I always say to parents is that this is not a one-time conversation. It's not a situation when you take your child and sit them down and tell them what's going on, and you're done with it."

Conversations about a parent's illness will be different for each family and each situation.

Shaw, for example, felt she didn't need to say anything to her son, since her cancer didn't have many physical manifestation; she didn't lose her hair, she wasn't terribly fatigued and she missed hardly a day of work.

"If there are no visible symptoms and you're feeling fine, you may decide to put it off for a while," Kalb says.

Parents who cannot put off the difficult conversation with their children should prepare themselves by first "getting their own emotions in order," Kalb suggests.

"I like to think of it like a flight attendant in an airplane: Put your own mask on first before attempting to assist other people," she explains.

Then when it's time to tell a child that a parent has cancer, the next step is to think about what the child can handle at his or her particular age.

Children around the ages of 2 to 4 might not be able to comprehend what's happening to a parent, but might sense something is wrong based on the parent's behavior, whether that parent is anxious, worried or exhausted.

Parents should realize that events such as bed-wetting or wanting to sleep with mom and dad aren't isolated incidents. They're reactions to what they sense going on in the family.

"I advise parents to try to contain your own anxiety so that you can be there for your child," Joshi advises. "Say in a very simple way, 'Mommy's gone to the hospital to get better.' "

Giving the child a project also helps, such as making a card for mom while she's sick.

"This is something very tangible they can feel good about," she says.

By 5 or 6, children have much better cognitive abilities, and simple explanations won't work as well, Joshi says.

"They know much more than we think they know," she says.

I told him and I asked him if he understood and he said he did. ...It was easier than I thought it would be.
--Jacqueline Shaw

To find out what they do know, Joshi advises asking them open-ended questions such as, "What do you think is wrong with mom?"

If your child is 10 or older and knows the name of your illness, there's a good chance he or she has already looked it up online, Joshi says.

"They've looked it up, they're talking to people, they're getting answers," Joshi says.

It's important, then, to help a preteen deal emotionally with the information he or she has assembled.

"Acknowledge your own feelings, that grownups get sad," Joshi advises. "You can say, 'We're all a little bit worried about mom.' "

As children become teens, they'll want to know more about their parent's illness, and parents can consider having a teen accompany you to a doctor's visit so he or she can ask questions.

"It's important to inform them and let them know what's being done to take care of the problem in a more sophisticated way," Kalb says. "They want to know about treatment. They need more meaty information."

Children and teens often benefit from support groups. The Children's Treehouse Foundation has a list of support groups at hospitals that provide ongoing support.

The American Cancer Society, Cancer Care and Parenting at a Challenging Time have detailed information about helping a child when a family member has cancer.

For Shaw, a single mother, getting financial assistance helped her take care of Aaron while undergoing cancer treatments. She received help from the Family Reach Foundation. CancerCare Assist has a list of other financial resources for people with cancer.

Shaw says that she's glad she didn't tell her son about her cancer and that she's grateful to friends and family who helped keep the information from him. His day care teachers, for example, knew about her illness, and didn't say anything to Aaron.

Plus, they made sure to put a chair near the door to his classroom, allowing Shaw to sit down when she entered the room and protect her wounds from his oncoming hug so Aaron wouldn't detect she was in pain.

But this week, knowing that CNN would be telling her story, Shaw decided to tell Aaron that she had been sick.

"It has been a burden on me because I knew I had to tell him one day," she told CNN in an e-mail. "I told him and I asked him if he understood and he said he did.

"It was easier than I thought it would be."

CNN's Sabriya Rice and Jennifer Bixler contributed to this report.