Blood test may be able to predict menopause 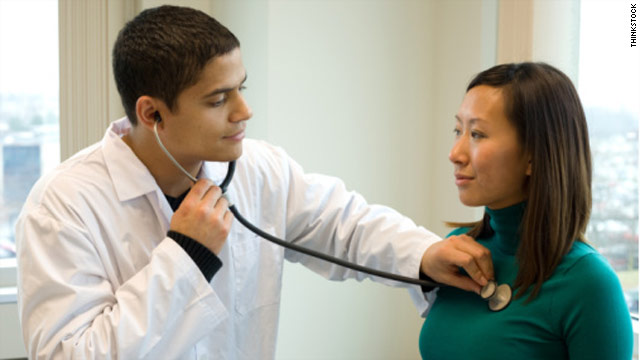 (Health.com) -- A simple doctor's-office blood test may one day be able to predict when a woman will start menopause, possibly even in women in their 20s.

Pending validation in future studies, the test could help women make reproductive decisions, say the authors of a study that will be presented Monday at the annual meeting of the European Society of Human Reproduction and Embryology in Rome.

"Women may want to know if they're OK waiting to start a family till they're 41," says Dr. Jennifer Wu, M.D., an obstetrician/gynecologist at Lenox Hill Hospital, in New York City, who was not involved with the study. "If they know they're going to start menopause at 45, they may not want to wait."

But the test definitely isn't ready for prime time and may not be used primarily to guide family planning decisions, even if it is eventually brought to market, other experts say.

Health.com: Fit at any age: Your 50s strength workout

"I'm not sure that this would help with family planning decisions [although] it's a very interesting first, small, observational study," says Dr. Steven Goldstein, M.D., president-elect of the North American Menopause Society. "It would be helpful to do a larger trial and see if it pans out and, if so, to what degree of accuracy."

In the study, researchers from Shahid Beheshti University of Medical Sciences, in Tehran, Iran, measured blood levels of anti-mullerian hormone in 266 women who were ages 20 to 49.

AMH is proportional to the number of viable eggs left in the ovaries, which produce the hormone, says Dr. James A. Grifo, M.D., Ph.D, program director of the NYU Langone Fertility Center, in New York City.

Health.com: 8 reasons sex is better after 50

In the study, the women were tested three times over a nine-year period, and a statistical model was used to predict menopause. So far, only 63 of the 266 women in the study reached menopause during the 12-year follow-up period.

Still, for these women, the test results accurately predicted menopause, give or take an average of about four months, with a maximum margin of error of 3 to 4 years (the greatest amount the test was "off"). On average, the women in the study experienced menopause at age 52.

Currently menopause is defined as a woman's last menstrual period -- confirmed after a full year without periods. As such, it can be recognized only in hindsight. "It has to be a retrospective diagnosis because you never know that period you just had is going to be the last one you'll ever have," Goldstein explains.

But that still doesn't mean that a premenopausal state and fertility are equivalent. Doctors commonly try to measure ovarian reserve, the amount of viable eggs still in the ovary, when trying to determine fertility.

"There's a difference between ovarian reserve from a fertility point of view and ovarian function from simply getting a period and making estrogen," Goldstein points out. "The much more important issue for fertility is ovarian reserve, not necessarily whether you're going to go through menopause at 50 or 53."

And although AMH is sometimes used to calculate ovarian reserve, it's not the preferred method. Doctors use other hormones for example measuring levels of follicle stimulating hormone (FSH) or estrogen but they still don't do the job very well at this point, Goldstein says.

"Assuming this test works, can you extrapolate [menopause] to the end of fertility? That remains to be seen," says Grifo.

The test might, however, help with making other types of medical decisions, Goldstein says.

"If it were really reliable, it could be helpful in counseling patients in decisions regarding hysterectomies," he says.

For example, if a woman aged 49½ came in with mild anemia from bleeding fibroids, results of the test could help her decide whether to undergo a hysterectomy or removal of the uterus, to deal with the fibroid problem.

"If I thought she would be [in] menopause in another six months, we could probably temporize with iron or non-steroidal anti-inflammatory drugs even," says Goldstein, who is also professor of obstetrics and gynecology at NYU Langone Medical Center.

But if menopause were further away, a hysterectomy now may make more sense.