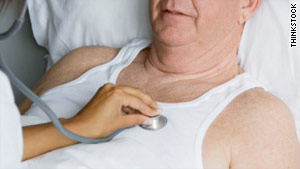 Study findings highlight the changes that need to be made to heart disease care, doctors say.
STORY HIGHLIGHTS
RELATED TOPICS

(Health.com) -- Heart attacks dropped by 24 percent in a large cross section of Northern Californians over the past decade, most likely due to less smoking, better blood pressure control, and lower cholesterol, a new study reports.

What's more, rates of the most severe type of heart attack dropped by 62 percent, according to the study, published this week in the New England Journal of Medicine.

"We believe improvements in targeting risk factors are in part responsible," says the study's senior author, Dr. Alan Go, M.D., the assistant director for clinical research at Kaiser Permanente, in Oakland, California. "We've observed in our population that fewer people are smoking, and there's better control of blood pressure and cholesterol."

All of the 46,086 heart attack patients in the study were insured by Kaiser Permanente Northern California, a private not-for-profit health plan that serves more than 3 million people.

The plunge in heart attack rates may not reflect trends elsewhere in the country, or even in other Northern Californians, however. Although the study patients were ethnically diverse and ranged in age from 30 to 90-plus, they all had one thing in common: They were insured and received quality preventive care.

"The Kaiser Permanente people, almost by definition, are employed," says Dr. Thomas Pearson, M.D., the director of the Prevention Research Center at the University of Rochester Medical Center, in Rochester, New York. "They are on a health-care plan, one which has paid attention to making sure people get guidelines."

The study included "haves" but no "have-nots," Pearson adds. Still, he says, the findings "provide a pretty good map" for how to prevent heart disease and reduce heart attacks.

Go and his colleagues looked at the 10 years spanning 1999 and 2008. During that period, the percentage of Kaiser Permanente Northern California members meeting recommended blood pressure levels doubled (from 40 percent to 80 percent), while the percentage of those with healthy levels of LDL (or bad cholesterol, a primary culprit in heart disease) rose from 67 percent to 73 percent.

The use of heart medications--including beta-blockers, cholesterol-lowering statins, and aspirin--increased during those years as well.

These prevention efforts appear to have paid off. Over the study period, the heart attack rate declined from 274 to 208 cases per 100,000 people, a decrease of 24 percent. The percentage of people who died within 30 days of a heart attack also declined by 24 percent.

Meanwhile, the rates of a severe and often deadly form of heart attack in which a coronary artery is fully blocked--known as an ST-segment elevation heart attack--also decreased, from 133 to just 50 cases per 100,000 people.

"Differences in the patients themselves did not explain what we were finding, so the remaining explanations could be differences in types of care," says Go, referring largely to preventive care.

That's great news for the members of Kaiser Permanente Northern California. What about for the rest of us?

The outlook isn't nearly as positive in some other regions and populations, says Jeremiah Brown, Ph.D., an instructor at the Dartmouth Institute for Health Policy and Clinical Practice, in Lebanon, New Hampshire, and the co-author of an article on heart disease trends accompanying Go's study.

While heart attack rates were falling among the people in the study, Brown points out, rates of diabetes and obesity continued to climb across the nation as a whole. "We are still facing an epidemic that is causing a gradual-to-rapid increase in heart disease-related deaths," he says.

And heart disease is not equally distributed across the U.S., Pearson notes. Southeastern states, and especially the regions lining the Mississippi and Ohio River Valleys--a swath collectively known as "Coronary Valley"--are among the hardest hit, he says.

Though the population in the study isn't representative of the nation as a whole, the findings do highlight the changes that need to be made to heart disease care, Brown says.

Right now the American health-care system is largely "reactionary," he says. "We do an excellent job of treating heart attacks and a relatively poor job of prevention."

If the health-care system can transition from "dealing with problems" to "creating sustainable lifestyle changes in our communities," Brown adds, "we can prevent the onset of chronic illness in our country beyond that of heart disease alone."