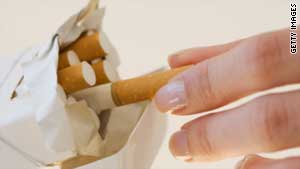 Despite Randolph's weary tone, the 800th time seems to be the charm--so far. Randolph, who started smoking after his senior year of high school, hasn't had a cigarette in a month. "It feels like a year some days," the New York City-based actor says. "This is actually the longest I have been able to quit smoking out of all my previous attempts."

The support he's received from the Facebook group has been a major factor in his success this time around, Randolph says. "I really enjoy reading about other ex-smokers, and seeing that they have stopped for long periods of time is very encouraging," he says. "Sometimes, when you first quit, you feel all alone, and the online reinforcement is very comforting."

Twenty years ago, smokers who wanted moral support while quitting had relatively few options. They could try to find a support group or smoking-cessation clinic in their area, but that was about it. These resources still exist, but now smokers--and ex-smokers fearful of falling off the wagon--can also turn to websites, Facebook pages, and even Twitter accounts dedicated to helping people kick the habit. The Web enables quitters to access smoking-cessation tools anywhere, anytime, and provides a platform for sharing information, videos, and personal stories with other smokers.

As social media sites like Facebook have exploded in popularity, the number of smokers seeking help online seems to be growing as well. One year after its launch in the spring of 2009, the New York City Facebook page--known as NYC Quits Smoking/I Quit Because--now has more than 5,000 fans. Qwitter, a Twitter-based smoking-cessation aid run by the Florida Department of Health, has more than 400 followers.

Social media may counter the strong social element that often keeps people from kicking the habit. Smokers tend to gather--and bond--in designated smoking areas, and potential quitters can be bombarded daily with the question "Want to grab a smoke?" It can be difficult to step out of that social network, and that's where a smoke-free online network may help.

Other online resources, ranging from the National Cancer Institute's Smokefree.gov to for-profit sites such as QuitNet and Habitchanger.com, offer a comprehensive suite of services to help you quit. These sites typically have several features that users can navigate through: step-by-step guides to quitting, expert advice, tools to help people identify their smoking triggers or tally up how much money they're wasting on cigarettes, and forums or chat rooms in which people can share information and tips.

What role do online programs play?

Web-based smoking-cessation programs "are about as good as just about anything else out there," says Cameron D. Norman, Ph.D., an assistant professor at the University of Toronto's Dalla Lana School of Public Health, who has studied the use of social media and electronic communication in health-care information. However, he adds that web programs are "not designed for necessarily everybody. Oftentimes people will use multiple methods to help them quit."

Many experts agree that online tools are a useful adjunct for people trying to quit smoking, but there's no silver bullet. Randolph says that in-person counseling, in addition to Facebook, is helping him kick his habit.

One big benefit of the best sites, Norman says, is that they collect many different resources--chat groups, phone hot lines, tips for quitters, and so on--in one place.

The fact that social media and quit sites are now available just about everywhere through smart phones is also a big plus, he adds.

Health.com: 10 smokers who kicked butt (or are trying to)

Scott Allan, 46, of Upton, Massachusetts, is gradually cutting down his cigarette intake with a little online help; right now he's down to a quarter of the number of cigarettes he used to smoke every day, and has 17 more days to go until he's smoke-free. "I like the Facebook page Quit Smoking, but it is not as proactive as Habit Changer," says Allan, who works in hospitality and sales. Habit Changer sends him an email and a text message each day with encouragement and advice.

"I believe that social media is helping me to find other 'quitters' and keeping my task of quitting on my mind more," he says.

There hasn't been a great deal of research on the effectiveness of social media for smoking cessation, and some experts are skeptical that online support groups, chat rooms, or Facebook pages--what experts call the peer model--really help people quit.

Face-to-face counseling is a proven aid to smoking cessation, but studies have suggested that electronic devices could also effectively deliver support. Peer emails and text messaging, even individually, could boost a smoker's odds of quitting successfully.

Smoking-cessation websites, however, seem to be an ideal vehicle for reaching a wide range of smokers and providing ample opportunity for getting social support. Though these sites have become increasingly popular, their effectiveness is still being determined.

Studies have turned up mixed results. A 2008 study conducted by researchers at the University of Minnesota, for instance, showed that personalized web programs nearly double a patient's chances of quitting compared to a control group, while a 2006 study showed no significant differences between smokers who used an Internet-based cessation program and those who participated in counseling sessions.

Other studies have had more modest results. A study sponsored by the American Cancer Society and published this February in the Annals of Behavioral Medicine examined the effectiveness of an Internet-based program called SmokeClinic, which guides smokers through a sequence of interactive steps to help them quit smoking and is based on the structure used in in-person counseling.

Of the 1,106 people who completed SmokeClinic, 13 percent were smoke-free 13 months later, compared to 10 percent of people who visited a control site featuring free booklets for self-guided quitters. But among smokers who were depressed, there was no difference in success rates between the two groups.

"From a research point of view it seems, so far, that something more systematic [like the approach used by SmokeClinic] is more helpful," says Daniel F. Seidman, Ph.D., who led the study and directs the smoking-cessation service at Columbia University Medical Center, in New York City. Seidman adds that the success rate of SmokeClinic is similar to telephone counseling or brief therapy sessions.

Health.com: Social, sneaky, or skinny -- Which type of smoker are you?

Although SmokeClinic--which Seidman and his colleagues developed and sold in 2005--isn't currently available online, Seidman says that the recent study has spurred plans to rebuild the site. In the meantime, most smoking-cessation sites out there offer a self-guided, interactive format that is less structured than SmokeClinic's.

But Seidman says smokers can take steps to change their behavior that can help make their quit attempts successful: understand your smoking patterns, prepare to make a change, plan a successful quit day, become aware of your personal smoking triggers, and so on.

"I've been doing this kind of work for 20 years and these are the things you need to know to have a successful journey out of [quitting] smoking," adds Seidman, the author of Smoke-Free in 30 Days.

Digital natives--people who have grown up with the Internet--may be more comfortable with, and likely to use, social media than people who are older, says Norman, who recently worked on a project in which young people interviewed their peers on camera about smoking and uploaded the videos to YouTube. Seeing other smokers telling their stories, and telling their own stories, can be very useful, he says.

Health.com: Common smoking triggers, and how to fight them

"That creates a conversation, and that's really what social media is all about," Norman adds. "Social media is about telling stories, it gives you a chance to blog, to tweet, to tell something on Facebook, to post photos."

And this kind of conversation has played a major role in helping Randolph quit. "I have gotten so much support and encouragement just being able to see posts from individuals all over my city, country, and the world who have successfully quit smoking," he says.

"I wouldn't be able to do that otherwise if media such as Facebook, Twitter, and so many other websites didn't exist that connected people. Without the encouragement of seeing others successfully quitting, my quit would have been much more difficult."