Lady Gaga: 'I do not have lupus'
STORY HIGHLIGHTS

(CNN) -- Addressing rumors that have circulated about her health, Lady Gaga told CNN's Larry King this week that she doesn't have lupus, but has tested "borderline positive" for the condition.

It may sound contradictory, but doctors say this can occur with lupus.

Like many autoimmune diseases, lupus is a mystifying condition. It's often hard to diagnose because of its vague and varying symptoms. No two cases are alike, according to medical experts. The disease can come and go without explanation, and its severity varies from mild discomfort to death.

"It is such a variable disease, that it's difficult [to diagnose] unless you deal with it all the time," said Dr. Gary Gilkeson, the vice chair of the department of medicine for research at the Medical University of South Carolina.

Lupus commonly affects women of color and occurs when antibodies that fight infections attack the body's own tissues. This causes symptoms such as swelling, rashes, joint pain, mouth sores and hair loss. It can become more severe if the inflammation spreads to kidneys, the heart, lungs, blood vessels and the brain. Patients often feel exhausted.

"Lupus is in my family, and it is genetic," Lady Gaga said. "And it's so funny because my mother told me the other day that my fans were quite worried about me because they did talk about the fact that I was tested for lupus.

"And the truth is I don't show any signs, any symptoms of lupus. But I have tested borderline positive for the disease. So as of right now ... I do not have it. But I have to take good care of myself."

Patients suspected of having lupus may undergo blood and urine tests or kidney or liver assessments.

"There is not a single lab test that is specific for lupus," said Gilkeson, who chairs the Lupus Foundation of America's medical-scientific advisory council. "You have to use the combination of the lab tests plus the clinical signs and symptoms."

Signs of lupus
The American College of Rheumatology has developed clinical and laboratory criteria to help physicians diagnose and classify lupus. Having four of the 11 criteria means a person probably has lupus.

-Joint pain and swelling that occurs in two or more joints

-Swelling of the linings around the lungs or the heart

-Neurological disorder, such as seizures or psychosis

-Other positive blood tests that may indicate an autoimmune disease

This test, known as ANA, checks for a stimulated immune system. A positive on the test doesn't mean that a person has lupus, because the levels can be elevated from genetic factors, an infection or medications. About 10 percent of young women test borderline positive in the ANA test, but it doesn't mean they have lupus.

Lady Gaga has said her aunt died of lupus.

"People with a family history can test positive, but never get it," said Dr. Scott Zashin, clinical associate professor of medicine at the University of Texas Southwestern Medical School. "There is a little higher risk of developing lupus because of family history, but it's possible to never get it."

A person typically needs to satisfy four out of 11 criteria for a lupus diagnosis, according to existing medical guidelines. But a person can still get a lupus diagnosis even if he or she doesn't meet four criteria, Gilkeson and Zashin said.

"The most common symptoms are achy joints, you almost feel like you have the flu, low fever, skin rashes," Zashin said.

Lupus may lie dormant for years and return when triggered by what's believed to be a combination of genetics and environmental factors, such as a medication or a virus.

Lupus Foundation of America: Could you have lupus?

Rasheda Thomas learned she had lupus when she was 12, after she developed a rash on her face.

But the symptoms gradually faded away for 10 years. 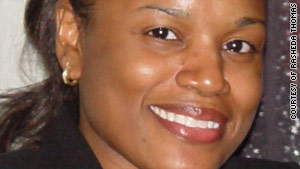 Rasheda Thomas, 35, said flares from the lupus tends to "knock me off my feet."

Then in 2005, Thomas woke up with skin lesions all over her body. When her doctor told her the lupus had returned, she said, "I cried my eyes out."

The disease severely affects the lifestyle of patients. Having lived free of the symptoms, Thomas had been a road warrior as a marketing manager for Fox Sports. She worked out constantly and loved to dance jazz and ballet.

But after the lupus returned, her joints often ached and her feet swelled. "I can't fit in my shoes anymore," Thomas said. The pliés strained her body too much.

She gets episodes of joint pains, migraines, mouth ulcers and rashes, occurring almost every other day.

"When I have a flare, it knocks me off my feet," she said. "When I get migraines that last 12-15 hours, everything must stop. I have to leave work and take a car service home. If I get a flare on my skin, it feels like lighting a match to my skin. I have to stop. Everything stops for me."

Simple tasks like bending, writing or walking are strenuous.

Despite the challenges of lupus, Thomas remains cheerful.

"I think I'm the lucky one," she said. "I think it could be worse. I look at people who haven't made it through who passed away from the illness."

Some people with lupus may experience minor symptoms, and for others like Thomas, it changes their entire lives.

"With any kind of disease, if you get a mainstream person in the media to talk about it, like Michael J. Fox about Parkinson's -- we're getting awareness," she said. "A lot of people never heard the word lupus before. We don't see PSAs as you do with other illnesses. I think we can get more awareness. It's slow, but it's coming."