Binge eating recommended as a psychiatric diagnosis; obesity is not 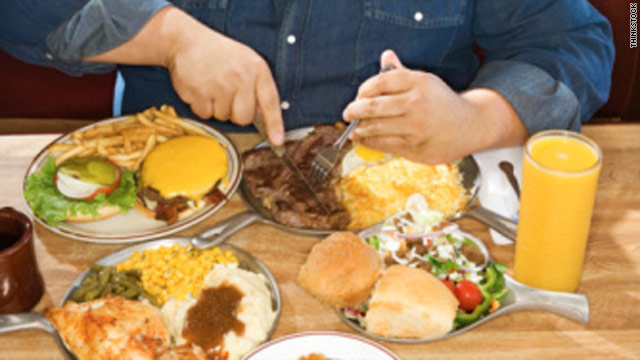 Binge eating is a step closer to becoming a recognized psychiatric disorder, but obesity has not been deemed appropriate for entry into diagnosis manual.
STORY HIGHLIGHTS
RELATED TOPICS

(CNN) -- Binge eating should be included as an official psychiatric disorder in new mental health guidelines, but obesity should not, a group of medical experts is recommending.

Psychiatrists are in the process of revising their field's diagnostic manual, known as Diagnostic and Statistical Manual of Mental Disorders. The manual contains descriptions, symptoms and other criteria for diagnosing mental disorders. It has implications for what treatments doctors use and what insurance plans may choose to cover. DSM's fifth edition is due in 2013.

After reviewing research, the work group cited scientific evidence that binge eating tended to run in families, had a distinct demographic profile with a greater likelihood of male cases, older age, a later onset of the disorder and personality disturbances.

Binge eating is described as eating amounts of food larger than most people would eat in a period of time under similar circumstances and feeling lack of control during the episode, according to the DSM group's proposed revision. The person also feels distressed, and the binging occurs at least once a week for three months.

Binge-eating episodes are associated with at least three of these behaviors:

1. Eating much more rapidly than normal.

3. Eating large amounts of food when not feeling physically hungry.

4. Eating alone because of being embarrassed by how much one is eating.

5. Feeling disgusted with oneself, depressed or very guilty after overeating.

In the current DSM, binge eating had been under the category known as "eating disorder not otherwise specified," also known as EDNOS.

Other eating disorder patients whose symptoms didn't meet all the diagnostic criteria would fall into this category.

For example, under DSM-IV, a patient has to stop having her period to have an anorexia nervosa diagnosis. Otherwise, she falls into the EDNOS category.

The DSM work group has recommended getting rid of the criterion of not having a period, because many female patients are anorexic but continued to menstruate.

"It's been problematic because it doesn't fit a lot of people -- women on birth control, girls who haven't started menstruating and boys and men," Dr. B. Timothy Walsh, the chair of DSM-V's eating disorders work group. "We recommend the criteria be dropped."

There are other types of EDNOS, such as purging disorder (a person doesn't binge, but vomits after eating) or night eating syndrome (a person wakes up at night and eats). Not enough information is known about these disorders at this point, Walsh said.

The problem with the EDNOS is that patients sometimes have more severe medical needs but don't qualify for the level of care from insurance companies, said Dr. Ovidio Bermudez, the medical director of the Laureate Eating Disorders Program in Tulsa, Oklahoma.

"Generally speaking, there is this unspoken aura out there that EDNOS is not as severe, therefore it's not as deserving in putting resources to use," he said.

Obesity not a freestanding disorder

Obesity was not recommended as a psychiatric disorder for several reasons, said Walsh, a professor of pediatric psychopharmacology in the psychiatry department at Columbia University in New York.

"It's a physiological, anatomical abnormality of excess body fat," he said.

Obesity could be the result of several factors including, "behavior, environment, genetics, some of those may include behavioral disturbances, which might be part of DSM," he said.

Walsh presented the group's recommendations, which were released online several weeks ago on the DSM website, at the American Psychiatric Association's annual conference last weekend.

"Most people with binge-eating disorders are overweight or obese, but you have to look into the question of whether obesity itself should be recognized as a DSM-V disorder. We don't think that can be justified," he said.

"People become homeless for all kinds of reasons," said Walsh, adding that the analogy wasn't a perfect one. "Some of them include emotional and behavioral problems, but also you get homeless for all sorts of other reasons like the environment."

"Obesity is a physical illness. Clearly like all illnesses, it has an emotional component to it. But so does asthma or diabetes. It doesn't mean they're emotional or psychiatric illnesses."

Bermudez said he had hoped DSM-V would have less categorical criteria and would be more descriptive of symptoms. But it's a hard balance to strike, he said.

"If it's too categorical, it's not so good," he said. "But if it's too fluid it becomes a challenge, because it jeopardizes the consistency of diagnosis."