5 toxics that are everywhere: Protect yourself 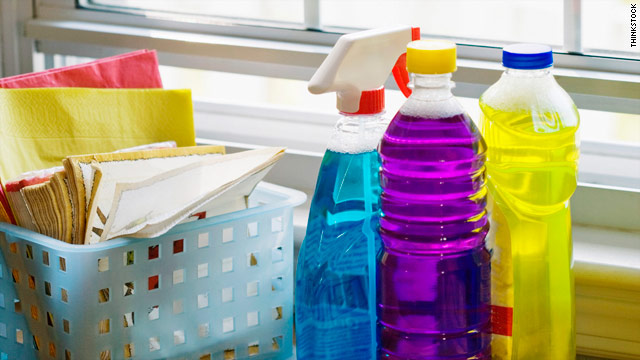 If the recycling number on a container is a 7, assume the container contains BPA unless it says otherwise.
STORY HIGHLIGHTS

Is enough being done to protect us from chemicals that could harm us? Watch "Toxic America," a special two-night investigative report with Sanjay Gupta M.D., June 2 and 3 at 8 p.m. ET on CNN.

(CNN) -- A growing body of research is linking five chemicals -- among the most common in the world -- to a host of ailments, including cancer, sexual problems and behavioral issues.

We encounter them every day -- in plastic bottles, storage containers, food wrap, cans, cookware, appliances, carpets, shower curtains, clothes, personal care products, furniture, television sets, electronics, bedding, cushions and mattresses. In short, every room in almost every house in the United States is likely to contain at least one of these chemicals, many of which did not exist a century ago.

They are bisphenol A, or BPA; phthalates; PFOA; formaldehyde; and polybrominated diphenyl ethers, or PDBEs. Tests reveal most of us now carry them in our bodies, but are they putting our health -- and the health of our children -- in jeopardy?

Here's what you should know about:

What it does: BPA is a building block of a lightweight, clear, heat-resistant and almost unbreakable plastic called polycarbonate. It's also used in epoxy resins.

How we're exposed: Eating food or drinking liquids stored in containers containing BPA. Infants and small children may also be exposed from hand to mouth contact with materials containing BPA. BPA also migrates from dental sealants into patients' mouths. Fetuses are exposed in the womb by their mothers. Almost everyone has been exposed. The Centers for Disease Control and Prevention found BPA in the urine of 93 percent of the people it tested.

Health effects: The American Chemistry Council, an industry trade group, says exposure is so low there are no ill health effects. A new five-year Kaiser Permanente study of Chinese factory workers found higher BPA exposure linked to reduced male sexual function. This research joins a growing body of research on animals that suggests BPA poses a potential cancer risk and may mimic the female hormone estrogen and disrupt the extremely sensitive chemical signals in the body called the endocrine system. According to the Food and Drug Administration, these studies suggest BPA could affect "the brain, behavior and prostate gland in fetuses, infants and young children."

Regulation: BPA is an Environmental Protection Agency "chemical of concern," one of five substances the agency has targeted for increased scrutiny and potential new regulation. (The others are phthalates, short-chain chlorinated paraffins, PBDEs, and perfluorinated chemicals including PFOA.)

What you can do to reduce exposure: Buy stainless steel bottles and glass food storage containers. If you buy plastic, check for the recycle number on the bottom. If there is a number 7, assume the container contains BPA unless it explicitly says otherwise. Switch to fresh or frozen vegetables instead of canned. Other precautions include not microwaving or putting hot liquids in BPA plastic containers and throwing away baby bottles and feeding cups that are scratched.

What they do: This family of chemicals softens plastics. They also are used to bind chemicals together.

How we're exposed: Absorbed into the body through personal care products, ingested in drugs, on food, in water and dust. Infants can be exposed through infant care products like baby shampoos, lotions and powders. Fetuses are exposed in the womb. Virtually everyone is exposed to phthalates.

Tell us: Is your town toxic?

Regulation: Phthalates are an EPA "chemical of concern." The FDA allows for plastic containing phthalate in flexible food packaging. The U.S. government last year banned or restricted six phthalates for use in children's toys and children's products.

What you can do to reduce exposure: Avoid shampoos, conditioners and other personal care products that list "fragrance" as an ingredient. These may contain phthalates. (Companies are not required to disclose the ingredients in their scents, and the industry says this phthalate is safe.) The federal government recently ended one source of exposure, banning the sale of toys containing any of six phthalates.

What it does: PFOA is used to make Teflon and thousands of other nonstick and stain- and water-repellent products.

Where they're found: PFOA is present in Teflon and other nonstick or stain- and water-repellent coatings as a trace impurity. These coatings are used on cookware, waterproof breathable clothing, furniture and carpets and in a myriad of industrial applications. PFOA can also be produced by the breakdown of these products.

Health effects: Almost everyone has PFOA in his or her blood. PFOA causes cancer and developmental problems in laboratory animals. The EPA concludes research on PFOA is "suggestive of carcinogenicity but not sufficient to assess human carcinogenic potential."

Regulation: PFOA is an EPA "chemical of concern."

What you can do to reduce exposure: The EPA does not recommend any steps to reduce exposure to PFOA. You can reduce potential exposure by using stainless steel or cast iron cookware. If you use nonstick cookware, do not overheat, which releases toxic gas.

How toxic is your air?

What it does: Formaldehyde is an ingredient in resins that act as a glue in the manufacture of pressed wood products.

Where it's found: Pressed wood products such as particle board, plywood, paneling and fiberboard; also, glues and adhesives and durable press fabrics like drapes.

What you can do to reduce exposure: Buying furniture free from formaldehyde eliminates much of the exposure we face from the chemical. One option to reduce "off-gassing": purchase "exterior grade" pressed-wood products, which emit formaldehyde at significantly lower rates. If you have wood products containing formaldehyde, increase ventilation, reduce humidity with air conditioning or dehumidifiers and keep your home cool.

What they do: PBDEs are a group of chemicals used as flame retardants, meaning they reduce the chance of something catching fire and slow how fast it burns when it does catch fire.

Where they're found: PBDEs are found in televisions, computers and wire insulation, and furniture foam. Over time, televisions and other products shed PBDEs, which accumulate in dust. More than 124 million pounds of PBDEs are produced annually worldwide and they do not break down easily.

How we're exposed: Swallowing PBDE-contaminated dust and contact with this dust are the primary routes into our bodies, where they collect in fat tissue. We can also be exposed through food and water. Breast-feeding infants are exposed to PBDEs through their mother's milk and have the highest exposure compared to their body weight, followed by infants and toddlers, according to the data collected by the Centers for Disease Control and Prevention. Levels in humans have been rising rapidly since PBDEs were introduced in the 1960s and '70s.

Health effects: PBDEs accumulate in the body. Toxicology tests show PDBEs may damage the liver and kidneys and affect the brain and behavior, according to the EPA.

Regulation: In December, the EPA named PBDEs "chemicals of concern."

What you can do to reduce exposure: Try to find products without PBDE flame retardants and be sure to sweep up dust.