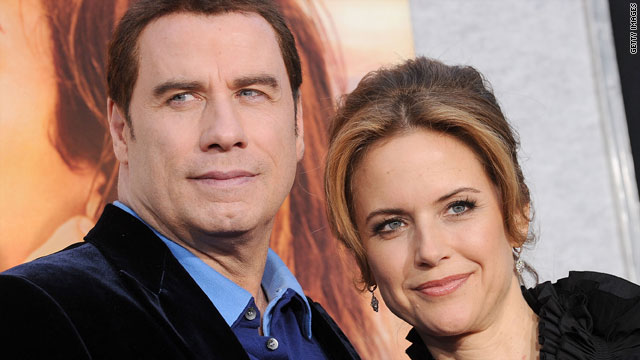 Kelly Preston, with husband John Travolta, is the latest celebrity to get pregnant in her late 40s.
STORY HIGHLIGHTS

(CNN) -- This month, actress Kelly Preston announced that she was pregnant at the age of 47, prompting TV talk show discussions about the marvels of modern medicine that allowed Preston and her husband, actor John Travolta, to have a baby so late in life.

But 47 -- that's nothing. Compared with some other women, Preston's practically a baby.

Both doctors say these days, it's not that difficult to get pregnant in your late 40s or early 50s -- as long as you have two things: someone else's eggs and at least $16,000 or so.

"Most women can get pregnant with donor eggs," said Kreiner, the medical director of East Coast Fertility in Plainview, New York. "The only reason you wouldn't be able to is if you have problems with your uterus, such as scarring or fibroids we can't operate on. But only about 1 to 5 percent of women have those problems."

So with donor eggs, could a woman get pregnant at, say, age 80?

"Theoretically, one would think there's no age limit," Kreiner said. "But it hasn't been tested."

Preston, who hasn't said whether she conceived naturally or with the help of donor eggs or any other form of technology, joins a list of celebrities who became pregnant in their mid- to late 40s. According to People magazine, actresses Geena Davis had a baby at age 46, Beverly D'Angelo at 49, Marcia Cross at 44 and supermodel Iman at 45. Actress Holly Hunter had twins at 47.

"They come in and say, 'Well, so-and-so got pregnant, and she's 47. My husband and I have been trying for so long. Why can't I get pregnant?' " said Dr. Hilton Kort, founder of Reproductive Biology Associates in Atlanta, Georgia. "I try to explain to them, we don't know how that celebrity got pregnant."

Here are some questions and answers about having a baby that late in life.

Like Kelly Preston, I'm 47. What are my chances of getting pregnant naturally?

Slim to none, doctors say.

"Spontaneous pregnancy [rates for] someone 47 is VERY low," Kort wrote in an e-mail, explaining that your chances of conceiving naturally at that age are less than 5 percent each month, and the miscarriage rate in the first trimester is 70 to 80 percent.

"It's not impossible that someone aged 47 [got pregnant] without assistance, but it's highly unlikely," he adds.

What are my chances of getting pregnant at age 47 if I use in-vitro fertilization and my own eggs?

"Success with IVF at this age with patient's own eggs is practically unheard of," said Kreiner, of East Coast Fertility.

The odds are so low that Kort highly discourages women that age from even attempting IVF with their own eggs.

"Forty-three is pretty much my cutoff for IVF with a woman's own eggs. Occasionally, I'll do it at 44," he said. "The success rate is under 5 percent. When I explain this to women, they don't even want to try."

What are my chances of getting pregnant at age 47 if I use IVF and donor eggs?

Kort says he has a 70 percent to 75 percent success rate when women in their mid- to late 40s use donor eggs.

Grifo, who used donor eggs to get his 56-year-old patient pregnant, says he has a 55 percent to 60 percent success rate with donor eggs. He says his patient was due in mid-April, but the woman hasn't contacted him to say whether she had the baby.

How much does it cost to get pregnant with donor eggs?

It costs $20,000 to $30,000 per attempt to get pregnant with donor eggs at the New York University Fertility Center, where Grifo is the program director.

You can cut that price in half by using one of two strategies.

If you use frozen donor eggs instead of fresh, it's about $16,000 at Reproductive Biology Associates in Atlanta.

If you and another woman use the same egg donor, it's also about $16,000 at East Coast Fertility.

What will I have to go through medically to get pregnant with donor eggs?

Kort and other doctors say they ask women in their mid- to late 40s to have an examination by an internist.

"The internist will be looking at hypertension, anemia, heart problems, pulmonary problems, diabetes and any other conditions that would get worse during pregnancy or could be brought on by pregnancy," Kort said.

Older parents may not be as energetic. But we older parents can be a lot more attentive and a lot smarter.
--Dr. Jamie Grifo, program director of New York University Fertility Center

Kort says that once a woman is cleared to become pregnant, she takes hormones, estrogen and progesterone, for 4½ weeks to prepare her uterus to receive the donor's fertilized egg. After the fertilized egg is implanted in her uterus, the the woman continues taking the estrogen, which is a pill, for another eight weeks, and progesterone, a shot she takes at home, until 10 weeks into her pregnancy.

Is it dangerous to be pregnant at age 47?

"The scientific literature says women do quite well in pregnancy at this age," Grifo said. "But it is a little riskier. There's a higher risk of developing high blood pressure, diabetes, and needing a C-section, all of which are manageable."

Will doctors help me get pregnant no matter what my age, or is there a cutoff?

Kort won't help a woman get pregnant after age 50.

"Women go into natural menopause around 50," Kort explained. "If that's when nature cuts things off, that's a good enough standard for me."

Kreiner doesn't have an absolute cutoff, on the other hand, instead making case-by-case decisions.

"There are increased health risks for the mother and the fetus, so we feel compelled to screen very carefully," he said.

He says his patient who gave birth last year at age 54 had a healthy pregnancy and a healthy baby.

What about being a parent late in life -- is that a good idea?

John Travolta will be about 74 years old when his baby graduates from high school. Is that too old?

The answer is yes, if you listen to angry e-mails Grifo receives from people he doesn't know but who apparently have heard about his work.

"I get these random e-mails, and they say, 'Who do you think you are?' and 'why are you doing this?' " Grifo said. "They're really caustic."

Grifo says some people worry that an older parent will die when the child is still young.

"But really, anybody can die at any age," he responded. "It's moot."

Others are concerned that parents won't have enough energy in their late 40s or 50s to raise a baby.

"Older parents may not be as energetic," said Grifo, who's 54 and has children ages 6 months and 2 years. "But we older parents can be a lot more attentive and a lot smarter. Nothing's all good or bad. There's a positive and a negative for everything."

Kreiner, also 54, looks at it differently. He has personal concerns about someone choosing motherhood very late in life.

But he adds that he doesn't let his personal views get in the way of helping women get pregnant into their 50s as long as they're healthy enough to do so.

"I rule out my own feelings as being irrelevant," he said.

CNN's Sabriya Rice and Jen Bixler contributed to this report.