What does it take to make a big race run? A lot of doctors 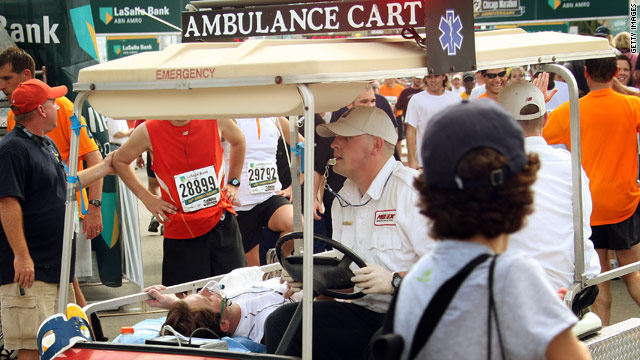 A runner is transported to an aid station near the finish of the 2007 LaSalle Bank Chicago Marathon.
STORY HIGHLIGHTS
RELATED TOPICS

(CNN) -- Forty years ago the competitor field for the Boston Marathon was small enough that doctors listened to every runner's heart before the race.

The medical team for Monday's race includes 47 doctors, 110 nurses, dozens of massage therapists, 26 first aid stations, "sweep" buses to pick up runners who can't go on and a sports psychologist making sure no one has a meltdown. At the finish line, 1,000 medical professionals will be on hand to give space blankets to runners whose body temperatures will instantly plummet when they stop running.

But the chief risk to competitors is lack of preparation, doctors said.

"The single biggest reason for problems with runners is a lack of training, and without training one has no indication that something is wrong with their heart," said marathoner and Massachusetts cardiologist Malissa Wood. "And the overwhelming majority of running deaths are related to a heart condition a runner was simply not aware they had."

She has spent years studying marathon runners and has met all kinds. She has seen charity runners who attempt to run 26.2 miles without ever having run more than five miles. She has met the person who foolishly thinks he or she can lose weight running a marathon.

Wood helped lead a 2006 study on Boston runners' hearts that found, in part, that the more a person trained before a race, the less heart-contracting enzymes leaked during the race.

"Training is not just about offsetting muscle soreness, but preparing your heart to withstand constant strain," said Wood.

As daunting as running a marathon may seem, more than a half-million people competed in the 26.2-mile endurance tests last year.

The single biggest reason for problems with runners is a lack of training, and without training one has no indication that something is wrong with their heart.
--Dr. Malissa Wood, cardiologist and marathoner

"It's open to everyone, which means everyone, if they aren't careful, can get injured," said Jeff Galloway. The former Olympic runner has coached more than a quarter-million people through their first marathons and annually directs one of the world's largest 10Ks, the Peachtree Road Race in Atlanta, Georgia.

Galloway has built a cottage industry around a run/walk/run method that research shows staves off joint and tendon injury. His suggestion -- run for four to five minutes and walk a minute. Give your muscles time to recover and you'll be less likely to hit "the wall," or the phase when glycogen levels are low and the body turns to burning stored fat for energy.

The race directors of the world's biggest marathons, including New York; Chicago, Illinois; Berlin, Germany; London, England; and Boston, meet once a year to share medical strategies, said Chicago's director Carey Pincowski. The Chicago staff has shared its new texting system, which alerts runners to severe weather before a race. The invention of the system was largely a reaction to freakishly extreme heat in 2007 at the Chicago Marathon that sent at least 50 runners to the hospital.

"We expect runners to pay attention and decide what's best for them," Pincowski said. "There's nothing wrong with saying, 'Today is not my day and I'll wait for the next marathon to come along.' "

Also in 2007, a runner in his 30s died during the race. His death was related to a heart condition and not caused by the heat, according to reports.

While the number of people competing in marathons is at an all-time high, deaths during races are still rare. Studies vary, but one accepted estimate is that one in every 50,000 marathon runners will experience a life-threatening condition during a race.

No database keeps track, but reportedly at least six people died in 2009, including three (they didn't know one another) at the Detroit Marathon. Race director Rich Harshbarger said the deaths were ruled natural, an "odd, tragic coincidence."

The Detroit race's staff of more than 30 doctors and nurses will not be bolstered much this year because there simply isn't anything more officials can do to help a runner who goes ahead despite having a condition that might harm him or her.

"I have to rely on each runner to know how healthy they are," said Harshbarger. "I think some people forget that running a marathon is not something to be done on a whim. It's a serious sport."