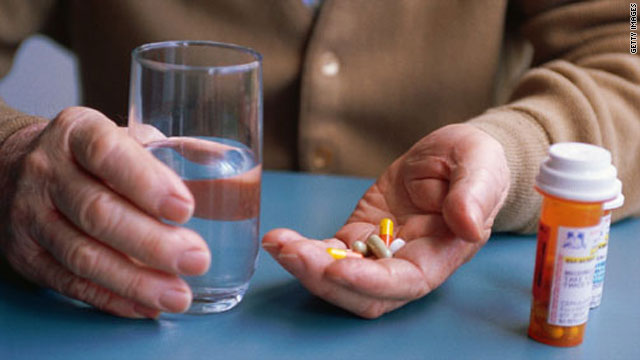 Most states have prescription monitoring programs to prevent drug abuse, but their effectiveness and requirements vary.
STORY HIGHLIGHTS
RELATED TOPICS

(CNN) -- Former child actor Corey Haim had prescriptions for as many as 553 dangerous drugs in the last year of his life, and it's the result of "doctor shopping," California's top law official said Tuesday.

The issue of doctor shopping -- visiting numerous doctors to fraudulently get prescription drugs -- has been raised in numerous celebrity deaths, including Anna Nicole Smith, Michael Jackson and Heath Ledger. Doctors say they often rely on their own instant judgments in the office and have little reliable means of double-checking the patients' information.

The 38-year-old actor died last month after collapsing at a Los Angeles apartment. The cause of death is pending, awaiting a toxicology report.

Haim had visited several emergency rooms and urgent care clinics with complaints of an injured shoulder or depression, according to investigators.

Doctor shoppers often visit facilities where medical professionals don't know them, experts say. They also call during weekends or ask for prescription refills using excuses such as having dropped the pills in toilets or getting pills wet on a camping trip, physicians said.

Misuse of prescription drugs is a growing problem. Estimated hospitalizations for poisoning by prescription opioids, sedatives and tranquilizers increased 65 percent from 1999 to 2006, according to a study in the May edition of the American Journal of Preventive Medicine.

Doctor shopping is a problem, but it's not the chief way prescription drugs end up with people for whom they're not intended, said David Brushwood, professor of pharmaceutical outcomes and policy at the University of Florida in Gainesville.

"It's a relatively insignificant source of diverted prescription drugs, as compared with theft from drug stores, warehouses, acquisition over the Internet, theft from people's homes."

In those states, a record from the prescription drug purchase is sent to the state agency that oversees the monitoring programs. Doctors can request reports online and find out what medications a patient has received in the past six months to a year.

"There are doctor shoppers, who see 15 doctors and pharmacies or more by deceiving physicians for professed pain and other disability that would cause prescribing these drugs," he said. "If doctors know they are obtaining drugs from other prescribers, they might be really reluctant to prescribe."

But these monitoring programs have limitations, Brushwood said.

It's easy to dodge the system by providing different names and identification numbers or buying drugs in neighboring states, he said. Most state laws do not require the doctors to look at the patient's drug history.

Many health professionals don't use the monitoring system anyway, Brushwood said. In his research, many expressed skepticism about the accuracy of the information and complained it was "time consuming" and did not "seem necessary," he said.

Doctors have other tools to prevent being duped.

"We're doing addiction screening in our clinics," said Dr. Doris K. Cope, professor and vice chairman for pain medicine in the department of anesthesiology at the University of Pittsburgh School of Medicine. "If someone is at high risk for addiction, we try to identify them, and we have one of our pain psychologists evaluate them. We then make appropriate referrals for their continued care."

They also test urine to see whether it matches the patient's medication history.

"If someone comes in and can barely move, they put on this big drama, then you see them get up and run out the door, even my youngest son could figure that out," said Cope, a member of the American Society of Anesthesiologists' Committee on Pain Medicines.

Some employ clever strategies such as memorizing symptoms to get a certain prescription or telling their doctors they have allergies to particular medication to get a stronger drug. But physicians have to walk a fine line, said Longo, a psychiatrist.

"We all have the expectation to practice prudent, conscientious medicine, but we're not trained to be DEA agents," Longo said. "We don't want to alienate patients who aren't addicted or abusing drugs. The majority of patients who have legitimate illnesses feel stigmatized getting controlled drugs."

Some of the popularly abused drugs include oxycodone, hydrocodone, benzodiazepine and methamphetamine.

"This is the addiction epidemic of our time," Longo said.