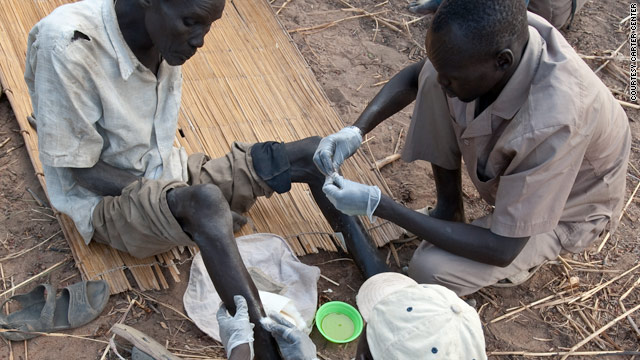 (CNN) -- Since 1980, one disease has been erased from the face of the Earth: smallpox. Health officials believe Guinea worm disease will soon be next.

Public health officials hope the rare disease, which remains only in sub-Saharan Africa, will be eradicated by 2015. About 85 percent of the 3,000 world cases are in southern Sudan; the remaining 15 percent are reported in Ghana, Ethiopia and Mali.

Thirty years ago, the World Health Organization declared that smallpox had been eradicated after an intense global vaccination campaign and development of surveillance programs to identify and contain cases.

For more on Guinea worm disease: Vanquishing the 'fiery serpent'

An effective vaccine was key in eradicating the scourge, said Dr. D.A. Henderson, who directed the WHO global smallpox eradication campaign from 1966 to 1977.

"One hundred percent of the people were protected with a single vaccination, and it protected for 10 years," said Henderson, now a professor of medicine and public health at the University of Pittsburgh. "Smallpox was the worst disease, so there was motivation for a lot of people and governments to be rid of the disease."

In comparison, Guinea worm disease is an obscure condition and has no vaccine. Eradicating the painful worm depends on getting access to clean water and changing people's behavior.

"I am persuaded that the Guinea worm effort is entirely possible," Henderson said. "It's going to be difficult because most of the problem is in southern Sudan where there is lot of hostility and fighting."

Guinea worm disease is usually non-fatal, but causes crippling pain and can immobilize its victims from being able to work, farm and function.

WHO has identified polio as the next disease for eradication, although that decision remains controversial.

Polio, a viral disease, affects nerves and can lead to partial or full paralysis. A vaccine exists, but its protection is "nowhere near as effective as smallpox vaccine," Henderson said.

One medical ethicist says trying to wipe polio out may not be the best goal. Simply controlling cases of polio would be more effective than "trying to chase down last marginal cases, which gets enormously expensive," said Arthur Caplan, director of the Center for Bioethics at the University of Pennsylvania.

In comparison, Caplan said, stopping Guinea worm is effective relative to the expenditure.

The Guinea worm eradication campaign by the Carter Center is expected to cost $300 million by 2012.

The next goal with Guinea worm is to stop transmission of the parasitic disease in southern Sudan, which reported 2,690 cases in 2009.

For more on how Guinea worm infects a person, see this life cycle

A country that reports zero cases of the disease enters a three-year certification phase where the activity is monitored by a special World Health Organization committee. That committee, known as the International Commission for the Certification of Dracunculiasis Eradication, makes independent evaluations and recommends to the WHO's director general whether to declare eradication.

"We're expecting by 2012, there is a fairly good chance of Sudan having broken transmission, which means we have another three years to put Sudan [as] the last country in the decree certification phase," said Dr. Gautam Biswas, who oversees the WHO's Guinea worm eradication campaign.

Over two decades, Sudan has been battered by civil war and ethnic cleansing in the western Darfur region. Despite the rift between its mostly Arabic northern region and African south, Guinea worm has been an issue that brought the sides together.

"The cease-fire enabled us to conduct disease surveillance with the freedom of movement, not fearing land mines and getting shot," said Dr. Nabil Azziz, who coordinated Sudan's national Guinea worm eradication program until 2007. "It was the beginning of developing coordination between north and south Sudan." Azziz now works for the Carter Center as a resident technical adviser.

Every year, health officials from both sides convened to discuss Guinea worm. After northern Sudan had reported no new cases in 2003, southern Sudan began its own program under the direction of Makoy Samuel Yibi Logora in 2005.

The two groups in midst of civil war were "able to sit down about Guinea worm and agree on what each side has to take place," Logora said.

Although the programs are no longer joined, Azziz and Logora remain friendly, bonded by the mutual goal of eradication. When they ran into each other during a recent meeting in Atlanta, Georgia, they embraced.

"Oh, godfather," Logora responded as they exchanged pleasantries in Arabic.

In Sudan, Logora said, "People can fight and forget and eat at the same table."