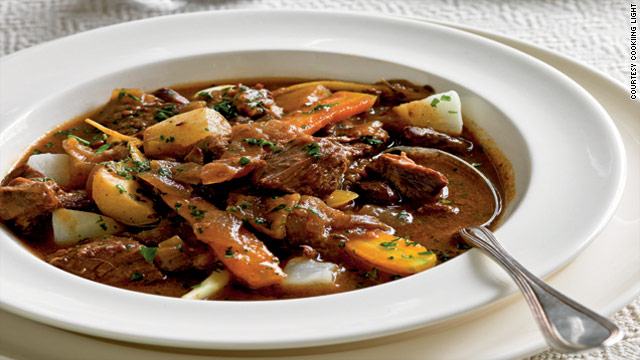 In Ireland it was a national holiday, the anniversary of the death of a patron saint who converted pagans to Christianity.

Until the 1970s, Irish bars weren't even allowed to open.

This idea of a more reverent, religious holiday was carried to America. Margaret Johnson, a second-generation Irish-American and Irish food expert who now lives on Long Island in New York, recalls St. Patrick's Day from her childhood as a time for family, community, and food.

"I grew up in Newburyport, Massachusetts," says Johnson of the small, mostly Catholic community where she lived. "Almost all my friends had last names like McLaughlin, Sullivan, or O'Keefe. My maiden name was McGlew. So we were all alike."

There was a large Irish population, but also quite a few French-Canadians and a couple of parochial schools: Immaculate Conception and St. Louis de-Gonzague.

Of course, she attended the Irish school, where she always participated in the annual St. Patrick's Day pageant, which preceded a school holiday.

At home, her extended family celebrated by gathering for corned beef and cabbage prepared by her mother. Though not traditionally Irish, this dish was the closest thing they could find to approximate the bacon and cabbage Margaret's Irish-born grandmother knew in the old country, where butchers cured pork in a manner similar to Jewish-American corned beef.

She also recalls that her family often drove to Boston -- 40 miles away -- for the parade during the 1950s and '60s because Newburyport didn't have one. In the big city, Johnson watched starry-eyed as bands marched by and music filled the air, but she always liked the Irish pipe bands best.

Like her mother, who never visited Ireland, Margaret dreamed of one day going to the motherland, a goal she finally realized on her 40th birthday when her husband took her and her children. Now, 25 years later, she's made 50 trips and visited all 32 counties.

Johnson, the author of seven Irish cookbooks (two published in Ireland), knows a thing or two about authentic cuisine. Asked if she cooks Irish food year-round or only for St. Patrick's Day, she responds, "People eat Italian food 365 days a year, so why not Irish?"

Root veggies like parsnips, turnips, rutabagas, and of course potatoes are popular in Irish cooking.

"It's not uncommon to serve potatoes three or four different ways," Johnson says. "Boiled, mashed, and fried -- all in the same meal."

Although we tend to think of lamb, beef, and pork, Ireland is also known for its seafood, like smoked salmon.

"And considering that the country is an island surrounded by some of the cleanest water on the planet, the fish there is wonderful," Johnson says.

A meal is typically served with hearty Irish soda bread, be it brown or white. The real deal is quite different from the American version, which is usually sweet and more cake-like, with raisins and caraway seeds.

Today, Johnson lives in Westhampton Beach, New York, where many New York City residents have summer homes. The Irish influence may not be quite as strong, but this sleepy winter town comes to life on St. Paddy's Day. Restaurants that close for the winter open for the day.

And as she did in her childhood, Margaret now gathers her family to celebrate. The morning begins at her home with a hearty breakfast or brunch of Smoked Salmon with Tangy Horseradish Sauce, an easy recipe to manage, as the salmon is store-bought. She makes the sauce and her famous Brown Soda Bread up to two days ahead. Then they bundle up, plop her young grandchildren in the little red wagon, and head out to The Patio restaurant, their designated spot to watch the local parade.

Afterward, they head back home, where Margaret starts a pot of her favorite Irish stew for dinner. While they wait, she sets out a traditional Irish Ploughman's Lunch Platter of Irish cheeses, cold meats, salad, and sweet-tart Tomato Chutney. And, of course, they drink a Guinness or two.

3. Add half of beef to pan; cook 5 minutes, turning to brown on all sides. Remove beef from pan with a slotted spoon.

12. Uncover and bring to a boil; cook 10 minutes or until vegetables are tender. Sprinkle with parsley.