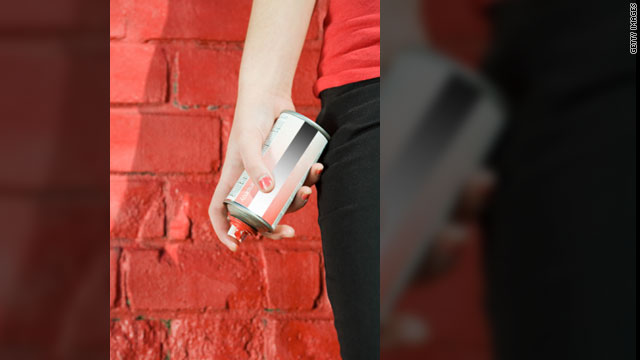 Some young people are inhaling a variety of cheap household products to get high including spray paint, shoe polish and glue.
STORY HIGHLIGHTS
RELATED TOPICS

Washington (CNN) -- When their kids turn 12, parents are concerned about peers pressuring them to smoke cigarettes, drink and use drugs, but it turns out 12-year-olds are doing something else: getting high on inhalants.

A new national survey from the Substance Abuse and Mental Health Services Administration report finds that they're using inhalants more than marijuana, hallucinogens and cocaine combined.

Some young people are sniffing -- inhaling -- a wide variety of products to get high. Inhalants are legal, cheap and everywhere. They can easily be found in most homes: spray paint, shoe polish, glue, air fresheners, hair spray, nail polish, gasoline, aerosols, computer cleaners, even the refrigerant from air conditioners.

"We continue to face the challenge of increasing experimentation and intentional misuse of common household products among the youngest and most vulnerable segments of our population: 12-year-olds," said Harvey Weiss, executive director of the National Inhalant Prevention Coalition.

"The data are ominous, and their implications are frightening because of the toxic, chemical effects of these legal products on growing minds and bodies."

According to the survey, 6.9 percent of 12-year-olds have "huffed," while 1.4 percent have used pot, 0.7 percent hallucinogens and 0.1 percent cocaine. The report found 5.2 percent smoked cigarettes.

Huffing can be fatal, leading to "sudden sniffing death."

Dr. Jennifer Caudle, director of the family medicine section of the Department of Internal Medicine at Sinai Hospital in Baltimore, Maryland, said it's critical to educate adolescents about the dangers of huffing.

"Young people do not always realize the consequences of their actions. However, it is possible to die from trying inhalants even once. 'Sudden sniffing death' causes the heart to beat rapidly, which can result in cardiac arrest."

Kevin Talley and his wife, Deborah, know that all too well. Their 17-year-old daughter, Amber Ann Suri, died after using inhalants in February 2009.

Talley said the teenager apparently had been inhaling for six months, but by the time they began to suspect something was wrong, it was too late.

"Parents must wake up to the reality that their child might try huffing and the consequences could be devastating," said Pamela S. Hyde, administrator for the Substance Abuse and Mental Health Services Administration. "That's why SAMHSA is leading the way to get information out to health care providers, kids, parents and everyone in the community so that our children hear a consistent message about the dangers of huffing."

It's a message 17-year old Ashley Upchurch said she now takes seriously. She said she started huffing when she was 11.

"Inhalants were cheap, legal and an intense high that would also enhance the feeling I would get from other drugs," she said. "These highs nearly destroyed my life." She's been in recovery for two years.

Many experts said 12 is considered a gateway age for inhalant use, but the National Inhalant Prevention Coalition and Substance Abuse and Mental Health Services Administration would like to slam that gate shut.

It is kicking off National Inhalants and Poisons Awareness Week, which starts Sunday. The American Osteopathic Association also is joining the national effort.