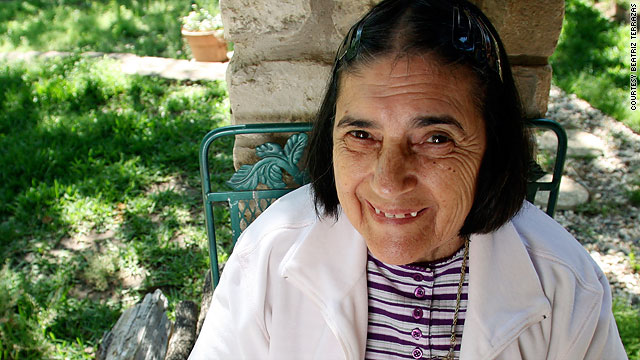 Francisca Terrazas of El Paso, Texas, has Alzheimer's disease and is the subject of her daughter's blog.
STORY HIGHLIGHTS

(CNN) -- Francisca Terrazas could not be left alone.

She burned her foot pouring boiling water over an ant hill in her driveway. She would wander for hours searching for aluminum cans. The effects of Alzheimer's disease had taken hold.

The reasons why minorities are at higher risk are unclear but not believed to be genetic.

The disease is indiscriminately devastating, robbing memories and personality as brain cells deteriorate.

But Alzheimer's for minorities presents unique challenges. Socioeconomic disparities can prevent access to health care, early detection or proper management of other conditions linked to the disease such as high blood pressure or diabetes, said Angela Geiger, the chief strategy officer for the Alzheimer's Association.

"African-Americans and Hispanics are less likely to know they have Alzheimer's and dementia," she said. "That has significant impact on the quality of life."

Some families ignore the symptoms, such as behavioral changes and memory loss, because their culture respects the elderly so much that they try to conceal their flaws, said Dolores Gallagher-Thompson, a professor of psychiatry and behavioral sciences at the Stanford University School of Medicine.

Minorities may not get early treatment, when medications are more likely to be effective and when patients are more capable of making plans, according to the report. At doctor's offices, some can encounter language barriers and difficulties navigating a complicated health care system.

Beatriz Terrazas sees this dichotomy in her family. Both her mother and her mother-in-law have the disease, and sometimes she feels as if she is "drowning in Alzheimer's."

Her white, well-educated mother-in-law has more financial options and insurance, Terrazas said; she lives in a residential care facility.

In contrast, Terrazas' 80-year-old mother, who has a sixth-grade education, relies on Medicaid and lives with her younger daughter in El Paso, Texas. She requires constant supervision. She goes to adult day care and has a Medicaid-funded home companion or a relative help with her care. When there is no one to care for her, Francisca Terrazas follows her daughter to work.

It's as if her mother has been "rebirthed to infancy," Beatriz Terrazas said.

Beatriz Terrazas, who lives near Dallas, Texas, occasionally relieves her younger sister, who is the primary caregiver for their mother. But she and her siblings were on the same page after learning about their mother's Alzheimer's in 2007: They did not want her in a nursing home.

"My family is still very Mexican in at heart," she wrote in her blog, My Mother's Brain. Putting her mother in a nursing home "would feel like giving up a part of my cultural and family history."

In Mexico, the extended family lives in the same neighborhood. When an elderly member became ill, the entire family -- aunts, uncles, brothers, sisters, cousins -- pitches in to take care of the afflicted, Beatriz Terrazas said.

But Terrazas' extended family members are scattered across Mexico and the U.S., making home care more of an individual's responsibility rather than that of an extended family.

In addition to the cultural beliefs, Terrazas' family members can't afford more upscale facilities and worry that ones covered by Medicaid would not meet their standards.

Minority families often feel a filial obligation to take care of their elderly at home, said Gallagher-Thompson, who is also director of the Stanford Geriatric Education Center.

"There are very strong cultural taboos against nursing home placement or assisted living," she said. "The idea is that the family is everything. You have to keep the person at home, no matter how hard it is to take care of them."

But the stress of caregiving is enormous, as many family members (often called "the sandwich generation") work full-time and raise their own children.

"They feel that they're being traitors," said Betty Marquez, an owner of New Horizons Adult Day Care, an El Paso center for the elderly that has mainly Hispanic clients.

"They feel, 'I'm letting down my mother, father or both parents,' " Marquez said of families who leave their loved ones at the day care. "They've sacrificed so much, and they can't give them the time of day since caring for Alzheimer's, it's 24-7. On top of that, they're working, and it's impossible."

Some days are harder than others.

Francisca Terrazas sometimes stares blankly at her eldest daughter and asks who she is.

"Lord, I'd give anything to have one day to ask her advice, share a family story that she no longer remembers, have a good laugh or cry over it," Beatriz Terrazas said. "Every once in a while, she'll remember something out of thin air. The synapses are firing, and then they're gone again."