Sunday offering: Surgery for the needy 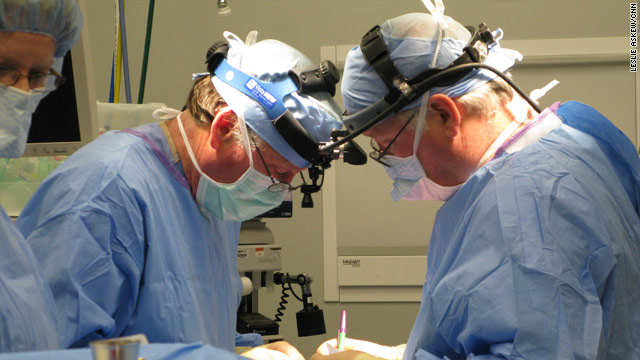 Since 2005, Surgery on Sunday has treated more than 3,100 uninsured patients.
STORY HIGHLIGHTS

Lexington, Kentucky (CNN) -- In the 1950s, when Dr. Andy Moore's father was the first plastic surgeon in town, many residents didn't have health insurance. But Dr. Andrew Moore Sr. believed that medicine was about service.

"He would accept all kinds of things in payment. People would bring chickens or a bushel of apples or a piece of furniture that they'd made," his son recalled. "He wanted them to be able to maintain their dignity."

Moore says he inherited his father's conviction, as well as his love of medicine.

Moore, who shares a plastic surgery practice with two of his four brothers, started a program that provides outpatient surgical care to Kentucky's uninsured -- for free.

On the third Sunday of each month, Surgery on Sunday opens its doors at the Lexington Surgery Center. Since 2005, when Moore persuaded a hospital to donate space and recruited volunteer staff members from across the state, SOS has treated more than 3,100 patients.

"In this economic time, the people that need this are our friends, neighbors and family," said Moore, 61, a Lexington native. "They can't wait till we get some sort of solution from the national government. They need this health care now."

Volunteers arrive bright and early -- the first surgery is at 7:30 a.m. -- and leave in the early afternoon. On an average Sunday, the group cares for 25 to 30 patients. Volunteers include anesthesiologists, nurses, receptionists and other surgeons. 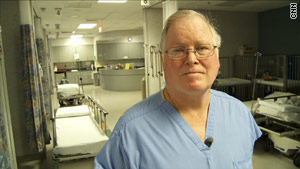 Most cases are gallbladders, hernias and colonoscopies, although SOS offers a wide range of surgical procedures. Different surgeons perform procedures depending on their specialties.

"The joy for me is not only taking care of the patients but to see my volunteers getting a lot out of what they're doing," Moore said.

For the Moores, medicine and service are family traditions. All three surgeon brothers -- Andy, Woody and Michael -- participate in Surgery on Sunday, and their mother is one of the program's official greeters.

Surgery on Sunday clients are the "working poor" who don't qualify for federal programs and can't afford insurance.

"It's our duty to help people that fall between the cracks in the health care system," Moore said. "This is what I went into medicine for. ... It's about taking care of people and not necessarily expecting something in return for it."

When he started out as a plastic surgeon 26 years ago, providing free care to patients was simple, Moore says; it just required a phone call to the hospital. Over time, hospitals agreed to help less and less, and the growth of insurance and computers added to the complexity. But patients still needed treatment. 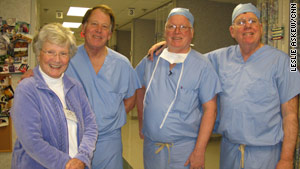 All in the family: Moore with brothers Michael, right, and Woody and their mother, Peggy Moore.

According to the Census Bureau, 46.3 million people in the United States are uninsured. In Kentucky, the fifth poorest state in the nation, 33 percent of working-age adults lack health insurance, according to a University of Cincinnati poll.

Moore says he won't stop fighting for the uninsured to get the care they deserve. "Knowing that you've made a real difference in their lives, at the other end, is the thing that keeps you going," he said.

Moore hopes to expand the program nationally. In March, the group is starting its first satellite program in Dallas, Texas, which will be operated by local volunteers using a template provided by Moore and SOS.

In Lexington, costs are covered by donations and private foundations, and patients are referred to SOS by hospitals and free clinics. People are seen based on the urgency of their medical need, and about 1,500 people are on a waiting list.

Michael Weyls had to wait more than a year for his second SOS surgery. A California native, Weyls, 52, was an avid surfer who worked construction for years. He was diagnosed with malignant melanoma at age 30 and had it removed, but it reappeared 20 years later.

At that point, Weyls was uninsured and couldn't afford the surgery, so his skin cancer advanced. By the time he first got to SOS in the fall of 2008, half of his nose had to be removed.

The surgery may have saved his life, but it also left Weyls disfigured and in a deep depression.

A year later, Moore helped reconstruct Weyls' nose. It took two Moore brothers and four hours of surgery to give Weyls a new start at life.

"What they did is awesome, and I'm grateful," Weyls said. "It's a wonderful program."

Want to get Involved? Check out the Surgery on Sunday Web site and see how to help.