Pet vaccinations are no longer one-size-fits-all 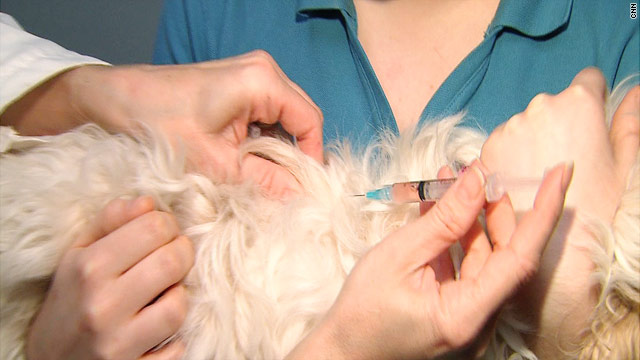 Given all the choices for veterinary vaccines, the decision for what shots dogs and cats need can get confusing.
STORY HIGHLIGHTS

(CNN) -- When Linda Thomas of Frederick, Maryland, found out her 2-year old beagle, Henry, had Lyme disease, she was pretty upset. Her dog hardly went outside. But after his diagnosis, Henry's vet told Thomas that Lyme disease, which is transferred to pets by deer ticks, is fairly common in Maryland, and Henry probably should have been vaccinated for it.

"Who knew?" said Thomas. "Had I thought he was in danger, I would have looked into it."

Like many pet owners, Thomas was faced with a dilemma: As drug companies continue to develop new veterinary vaccines for numerous diseases and conditions, those who have animals must decide which vaccinations are right for their dog or cat.

"I was given a whole list of shots that Henry needed," Thomas said. "It got kind of confusing. And kind of expensive."

Until recently, vets simply gave all pets booster shots every year. That's because vaccine manufacturers suggested the regimen. And although veterinarians still believe a yearly checkup will keep pets healthy, the number of vaccines given yearly has diminished. Although the American Veterinary Medical Association stresses that shots are the best way to keep your pet and the general public safe, they do admit that yearly boosters and a slew of shots at one time are not always necessary.

"Studies are starting to show that we don't need to vaccinate them every year, said Dr. Ashley Shelton, assistant director of the AVMA. "Some need to be boostered more frequently, others need to be less."

And for some pet owners, that's a bit of a relief, not only for their pocketbooks but for their state of mind. Many animal lovers, like Thomas, shy away from too many inoculations for their pets. "Sometimes I feel they [the medical community] come out with these new vaccines and they push them on us," she said. "I'd like to know what I'm giving my pet."

The AVMA says "core" vaccines, such as rabies, distemper and the vaccine for the parvovirus, are recommended for most dogs in a particular area because they protect from diseases most common in that vicinity. For cats, rabies, feline leukemia and a respiratory vaccine are core vaccines. "Noncore" vaccines are reserved for individual pets with unique needs such as the protection against Lyme vaccine. And they work.

For example, since most states in the U.S. require pets to be vaccinated for rabies, the number of cases in dogs and cats has fallen drastically. More than 90 percent of all animal cases reported annually to the Centers for Disease Control and Prevention now occur in wildlife. Before 1960, the majority of rabies cases were in domestic animals. According to the AVMA, improved vaccination programs and control of stray animals have been effective in preventing rabies in most pets.

Although human rabies deaths are rare, the AVMA estimates public health costs associated with disease detection, prevention and control have risen, exceeding $300 million annually. These costs include the vaccination of companion animals, animal control programs, maintenance of rabies laboratories and medical costs. But the effort has worked. The CDC estimates one to two people a year die of rabies in the United States.

What once was a yearly vaccine, rabies vaccines are now certified for three years of protection in most areas of the U.S. However, some states still require yearly rabies shots, so talk to your vet.

Drs. Sarah Bowman and Wendy Knight, co-owners of CityPaws Animal Hospital in Washington, D.C., agree that vets should tell pet owners when their pets should be vaccinated and what the vaccines are for.

When the canine flu vaccine became available a few years ago, Knight only mentioned it to her clients. But last year, when the virus became widespread, the clinic made sure owners knew about the vaccine. Not because humans could catch the flu from their dogs -- that appears not to happen -- but because vets were seeing serious consequences in animals.

"There was an outbreak in the last year, and a lot of the dogs were not only getting upper respiratory symptoms, but also pneumonia," Knight said. "We felt it was important that our owners knew it could be a problem. We didn't push it, but we made it clear it [canine flu] was becoming a problem.

Bowman also says it is important that vets and owners talk before coming up with a vaccine program, because a boxer can require different shots from those needed by a bichon frise.

"You can tailor a vaccine series for an individual animal based on age, where the animal lives, is it traveling a lot, whether they go outside," Bowman said.

"Vaccines are no longer one-size-fits-all, Shelton said. "People need to set up a schedule with their vets and keep an accurate record of their pet's vaccines. That way, they'll be able to know what their pet is vaccinated for should an outbreak or problem occur."