The next frontier in athletic doping -- genes 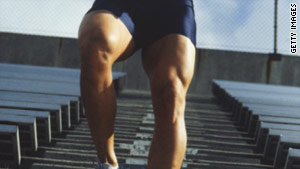 Since human genome was decoded in 2004, scientists have scrambled to apply the knowledge.
STORY HIGHLIGHTS

Consider "Marathon Mouse," a rodent with an artificially tweaked protein gene that made him run twice as far as normal mice.

Want to know if your child has a future in track? Make junior say "Ah..." for a cheek swab to see if he has a gene common in fast runners.

Have an injury that just won't heal quickly enough for a game? Scientists are coming up with ways to seal those muscle tears like the cheerleader heals herself on "Heroes."

"It's not a stretch to imagine that there's an Olympic athlete -- possibly at Vancouver -- who has started this new, very risky form of gene manipulation," said Dr. Theodore Friedmann, a top scientist with the World Anti-Doping Agency, which conducts drug testing for the International Olympic Committee.

"I don't know of any particular case where a person has gene doped but the technology is here. If there isn't a case I can point to today, there will be soon," the geneticist said from his lab at the University of California-San Diego.

When the human genome was decoded in 2004, scientists scrambled to apply the knowledge in hopes of curbing muscular dystrophy, advancing stem cell therapies and unlocking the secrets of diabetes. Others discovered that manipulating genes could heighten athletic performance, kicking off a new stage of a classic race between dopers and the testers chasing them.

Gene doping is a broad term used to describe any change created purposely to a person's DNA through various means, from injection to pill. Friedmann wrote in this month's Science magazine about a few methods, including injecting IGF-1, or insulin-like growth factor, a chemical manipulation of naturally occurring IGF.

When you lift weights, you cause tiny ruptures in your muscles. That action triggers your body to reproduce multiple copies of cells that merge with muscle fiber, ultimately strengthening your muscle. When the muscle is being rebuilt, another protein called myostatin tells the nearby cells to stop multiplying; your muscle is done growing until you can get back to the gym and repeat the process.

When the chemical IGF-1 is injected in rodents, however, their muscles heal at a much faster rate and they are able to lift more weight. IGF-1 can boost that initial strength and healing process, and it's possible in another step to artificially block myostatin production, allowing the muscle to keep growing without putting in half the sweat.

Two simpler gene doping methods involve pills. When their existence was first revealed last summer in the journal Cell, an international uproar ensued, with media portraying them as fix-alls for the average person who doesn't want to work out and the competitor who wants an edge.

The "couch potato pill," a synthetic protein called Aicar, enhanced nonexercising rodents' endurance on a treadmill by 44 percent after four weeks. Another was an experimental substance, GW1516, which improved endurance capability by 75 percent. Neither drug is approved by the FDA, said their inventor, Dr. Ronald Evans, a geneticist at the Salk Institute for Biological Studies in San Diego, California.

"I got hundreds of phone calls from everywhere -- a lot of athletes wanting to get it," said Evans', whose research was intended to treat muscle wasting and obesity disorders.

He is accustomed to controversy. In 2005, he showed the world "Marathon Mouse," a rodent whose genes he tweaked so that it was resistant to weight gain and could run twice the normal distance of other mice.

"At first, I was bothered by the reaction," he said. "It's not what we might ideally want to think sport is, but the reality is athletes will do anything to perform better."

I don't know of any particular case where a person has gene doped but the technology is here. If there isn't a case I can point to today, there will be soon.
--Dr. Theodore Friedmann, World Anti-Doping Agency

Last year, Pierre Bordry, the head of France's anti-doping agency (Agence Francaise de Lutte contre le Dopage) told Le Monde that he was "convinced that two new products have been used during the Tour, two drugs that are not yet on the market."

CNN spoke with Bordry, who reiterated his belief, but did not respond when pressed to name those drugs.

There was no detection method for Aicar at the time of the 2009 Tour de France bicycle race, according to WADA spokesman Frederic Donze. If there has been a test developed since then, it's WADA' s policy not to reveal that, he said, adding that the French anti-doping agency has probably stored samples of the 2009 Tour for possible later re-analysis.

"I heard that Aicar had been used, but I have no idea if that's true," Evans said.

Aicar is listed on WADA's nine-page banned substances list, which does little if there's no known test for it or other gene doping mechanisms. Friedmann is only aware of one way to test, which is wholly impractical -- performing a biopsy to see if a genetic change has left a tissue signature.

"Do you know an athlete who would consent to having their muscles cut? I don't," said Friedmann.

Another testing obstacle: How could one tell a difference in gene make-up without an athlete's genetic code already on file for comparison? WADA is trying to address that by developing a "passport" program that will keep blood and urine profiles of elite athletes on file long-term. Canada and Great Britain announced this month they would participate in the program for the London 2012 Olympics.

Nevertheless, there is one basic and overall problem with gene doping, at least right now. Nearly every scientist considers the method potentially deadly, primarily because the method is still largely untested in humans. It's unclear how to stop a gene mutation once it has begun, scientists say.

While Marathon Mouse did not, as some jokingly suggested, grow big enough to eat Manhattan, it had a healthier life than baboons that were given a substance known in its trademark form as Repoxygen during a 1998 lab study. The drug, which was developed but never marketed by British company Oxford Biomedica, carries an experimental virus meant to deliver a gene that treats severe anemia. There has not been a proven case of actual use of Repoxygen by athletes.

But in 2005, the trial of once-celebrated German track coach Thomas Springstein was a wake-up call to the sporting world that Repoxygen also carries the gene for erythropoietin, or EPO, a protein that boosts red blood cell production and endurance.

Springstein was convicted in a criminal court in his home country and given a 16-month suspended sentence for supplying performance enhancing drugs to his underage runners, who claimed he told them the pills were vitamins. Prosecutors read e-mails from Springstein in court. "The new Repoxygen is hard to get," he allegedly wrote, apparently to an unknown supplier. "Please give me new instructions soon so that I can order the product before Christmas."

In a 1998 study, baboons given a substance similar to Repoxygen nearly died when their red blood cell count skyrocketed so severely that massive amounts of their blood had to be drained. Other primates developed an immunity to EPO and failed to produce red blood cells at all. They had to be euthanized.

Yet despite such nasty outcomes, the ethical debate over gene doping is hotter than ever. In an era when it is socially acceptable, practically encouraged, to enhance yourself with Botox, tummy tucks or extreme dieting, people referred to as the "pro-dope" lobby say genetic manipulation is mankind's natural evolution to achieving unparalled physical greatness.

Andy Miah, a bioethicist and University of the West of Scotland professor, argues that society is morally obligated to find safer means to genetically enhance athletes.

"If we can develop technologies that more carefully align with an athlete's individual physiology, then the chances of it leading to unforeseen side effects diminishes considerably," Miah said.

Every athlete makes a choice about what technology they will use to help them prepare for competition."
--Andy Miah, bioethicist
RELATED TOPICS

If it's possible to create webbed fingers so that swimmers can improve their stroke, he's for it.

"Some will recoil at the idea of this, since they feel it will sully the good name of so-called 'clean' sports. My response is that this is already happening," he said. "Every athlete makes a choice about what technology they will use to help them prepare for competition. Some athletes will reject the advice of nutritionists, psychologists, physiotherapists and so on.

"They may not even wear running shoes. However, the majority of athletes immerse themselves in a world of technology -- whether they perceive it or not -- and modern sport has always been about the obsession to evolve performance, beat world records and generally test the boundaries of human capability."

He notes cases of Paralympians who could perform better than their able-bodied competitors, such as double amputee Oscar Pistorius, a South African sprinter who some say has an advantage because of his Cheetah Flex-Foot carbon fiber artificial limbs.

Atlas Sports Genetics is a company founded a year and a half ago in Boulder, Colorado, considered America's capital city for endurance sports. In 2009, Atlas sold about 1,000 mail-order at-home tests to parents mostly of junior high students, according to spokesman Mike Weinstein, a mechanical engineer.

Each test costs $149 and consists of a cotton swab and activator that Atlas says will show if the child possesses ACTN3, a gene expressed in fast-twitch muscle fibers. Stronger fast twitchers are faster runners. The company does not guarantee results, which are determined at a lab in Australia.

"It really is kind of for the Type-A parent that really wants to confirm what their hopes are that their child is going to be an athlete," he said. "It hasn't been as large a market as we thought it could have been, but we're growing."

Experts CNN spoke with agreed that there was no way one gene could predict that a child is a future world-class cyclist or Olympic sprinter. There are more than 200 genes linked to exercise. There is no single solution to sports success, they said.

Evans was reminded of this recently at a conference. He was finished giving a lecture and looked up to see athletes in the audience.

They asked him: "If I take your drug with EPO and growth hormone, would it be safe? How do we get it?"

"They said, 'Because we're athletes,' " the scientist recalled.

Then the athletes turned the question on him.

"They asked me, 'Dr. Evans, let's say there was a drug out there that you knew would make you smarter and you might be able to make another discovery, would you take it?' " he said.