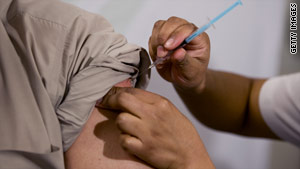 Health officials continue to urge people who haven't received a swine flu vaccination to do so.
STORY HIGHLIGHTS
RELATED TOPICS

Atlanta, Georgia (CNN) -- The H1N1 virus, also known as swine flu, may have killed as many as 17,000 Americans, according to new estimates by the Centers for Disease Control and Prevention (CDC) in Atlanta.

Though 2,498 confirmed deaths linked to the H1N1 virus had been reported to the CDC as of January 30, the agency estimates that between 8,330 and 17,160 people actually have died from H1N1.

In comparison, the CDC says that in a regular flu season, about 36,000 people in the United States die from seasonal flu, with 90 percent of the deaths usually occurring in people age 65 and older.

Since this new flu virus emerged in April 2009, health officials have recognized that the reported numbers of people who have been hospitalized and died provide only a partial picture of the full outbreak. Underreporting of influenza cases and deaths is common, especially in the early weeks or months of an outbreak.

By mid-July last year, the World Health Organization (WHO) no longer recommended that countries with known H1N1 transmission test everybody who had flulike symptoms, as laboratories were being overwhelmed. Patients were to be diagnosed based on symptoms alone, since nearly all of the circulating flu strains were H1N1.

Only severe cases of flu, which lead to hospitalization or death, were to be tested. The CDC adopted these recommendations for the United States, also.

Despite the recommendation that deaths suspected to be from H1N1 be tested, the CDC is aware that many are not, and in many cases H1N1 might not have been suspected.

According to the report released Friday, the CDC estimates an average of 57 million people have been infected with H1N1 and an average 257,000 cases resulted in hospitalizations.

Health officials continue to urge people who haven't received a vaccination to do so.

"The real tragedy is that people are still getting sick and we have a vaccine that will help prevent illness," Quartarone said.